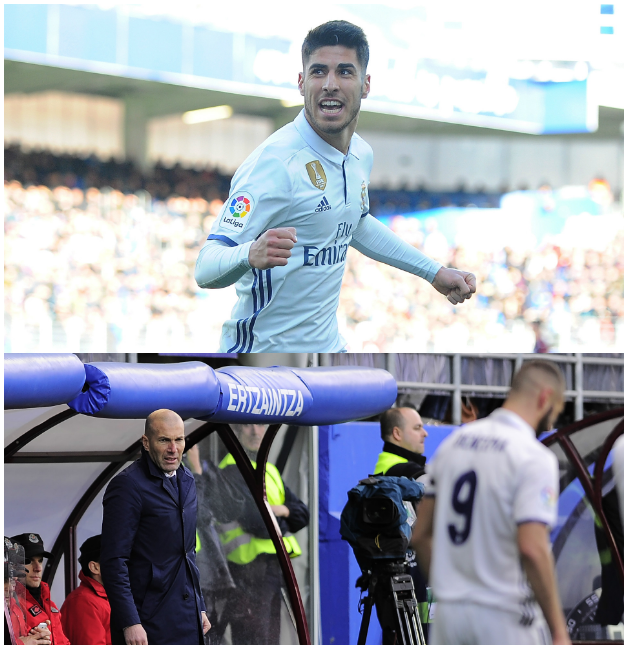 The striker scored from a rebound after Yoel had saved his initial effort and then turned home James Rodriguez’s free-kick to double Real’s lead.

Benzema set up the third with a cross which Rodriguez slid home over Yoel.

Madrid also had to cope without suspended duo Gareth Bale and Alvaro Morata, Zinedine Zidane deprived of his three starting attackers from the draw with Las Palmas last time out.

But Benzema, who had not scored in his previous seven LaLiga games in his worst top-flight run for three years, struck twice to send the visitors on their way to a vital win in the title race.

The victory puts Madrid back on top of LaLiga, two points clear of Barcelona ahead of their match against Celta Vigo at Camp Nou later on Saturday.

Eibar had a goal ruled out for offside as they attempted to respond, Gonzalo Escalante flagged for offside having tapped in after Navas had kept out Sergi Enrich’s header from point-blank range.

But the hosts got a goal that did count with 18 minutes remaining, a cross from ex-Madrid winger Pedro Leon – who the visitors claimed had fouled Nacho in the build-up – turned in by Pena at the far post.

Any hopes Eibar had of a positive result had long been extinguished, though, as Madrid put the pressure back on Barca and turned their attention to Tuesday’s crucial Champions League last-16 second-round match with Napoli, which they lead 3-1.

Eibar had been chasing what would have been a club-record fourth straight home league win, but stay seventh after a convincing defeat.