Keep Calm, All Is Well With Uche Jombo & Her Husband, Omo Oboli Confirms 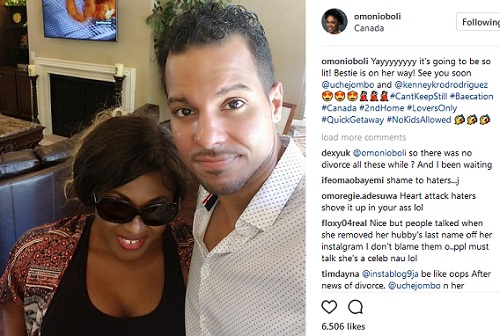 Few weeks ago, Uche Jombo yanked off the name of her husband from her IG page making most of her fans think all wasn’t well despite her saying she only wants to keep her family off social media henceforth. Fast forward to few days ago, leaked photos of her Puerto Rican husband, Kenney Rodriguez and a supposed girlfriend of his hit the net with claims that Rodriguez is settling for her after calling it off with Uche! But now, Omoni is saying otherwise and proving all his well with the couple. She shared a photo of them saying they are on their way to Canada, where she already is, for a vacation.

Keep Calm, All Is Well With Uche Jombo & Her Husband, Omo Oboli Confirms was last modified: July 12th, 2017 by Reporter