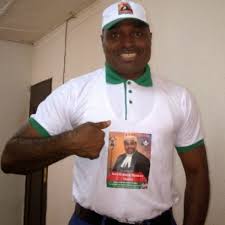 Popular Nigerian actor Kenneth Okonkwo, who became prominent for his role as ‘Andy Okeke’ in the 1993 Nollywood Classic ‘Living in Bondage’, has declared his intention to run for the post of the governor of Enugu State,  South-East of Nigeria.

The Nsukka born actor declared his candidacy over the weekend during the expanded stakeholders meeting of the APC, Enugu state Chapter, where he said he intends to run against the ruling People’s Democratic Party in the state, saying the party is not working at all.

He said: “My people made that move, called me and I said God forbid that I will quench your spirit. I said I am going to present myself in line with the wishes of my people for this post to be the governor of Enugu state 2019 and I so present myself.”

He also added, “In APC, our aim is to build a nation that will grantee political stability, mutual and peaceful co-existence, respect and understanding and equal opportunity for all. We are here to render selflessness at all levels of governance that will guarantee people a sense of nationality and patriotism. And I have found those beliefs compatible with my own. I, Dr. Kenneth Okonkwo, hereby present myself to be the gubernatorial candidate of this party.”

Kenneth Okonkwo Veteran Actor -Declares To Run For Governor Of Enugu State Under The APC was last modified: March 5th, 2018 by Igbokwe John

Just In: Wizkid Is Getting Married In...