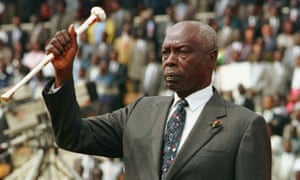 “It is with profound sadness that I announce the death of a great man of an African state,” Kenyatta said in a statement.

He ordered a period of national mourning until a state funeral is held, on a date not yet announced.

The former president died “in the early morning of February 4 at Nairobi hospital in the presence of his family,” Kenyatta said.

Moi fought off rivals in a bitter contest to take the top job in 1978, succeeding Kenya’s first president, Jomo Kenyatta, when he died.

The speaker of Kenya’s national assembly, Justin Muturi said on Twitter that Moi was an “astute politician”, who “employed pragmatic nationalism to keep the country together for the 24 years that he led our nation”.

“He will be remembered for his great efforts towards consolidating peace and tranquillity within the Horn of Africa and largely the East African Region, at a very difficult time for the region and the African continent,” Muturi added.

One of the defining scandals of Moi’s presidency was the loss of $1 billion from the central bank through false gold and diamond exports.