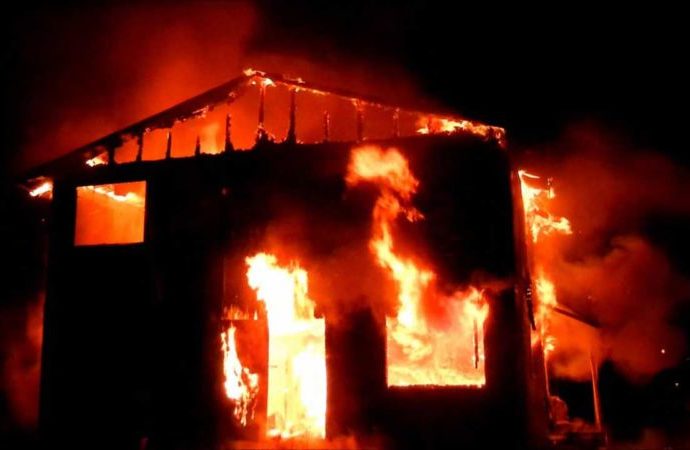 Tragedy struck at No. 5, Obudu Street, in Diobu area of Port Harcourt, the Rivers State capital as a newly married man, simply identified as Mr. Alozie was burnt to death while cooking with kerosene stove in his kitchen.

The landlady of Mr. Alozie revealed that the incident happened on Thursday afternoon when Alozie rushed home from his shop, where he ground and also sold pepper to prepare a quick lunch for himself and his nursing wife, Mrs. Chinelo Alozie, with a three-month-old baby.

It was gathered that the victim, who was in a hurry to get the meal ready for his family was adding kerosene to the stove while it was still on.

The action of the deceased was said to have led to an explosion, which attracted neighbours, even as the fire affected his stomach and genitals.

“Alozie came home from his shop, where he sells dried pepper and also grinds it, to arrange afternoon food. As he was adding kerosene to the stove while it was still on, it caught fire and he (Alozie) struggled to extinguish it before the fire burnt his stomach and genitals.

“When his co-tenant saw smoke coming out of his house and rushed in to investigate, Alozie was already unconsciously lying on the ground. He was immediately rushed to Mile One Hospital for help, but was confirmed dead this morning,” the landlady, who did not mention her name, added.

Another eyewitness, who craved anonymity, said that the victim was a newly married man, who just did his first child dedication barely three months ago.

The source pointed out that the ceremony attracted friends and well wishers.

“Mr. Alozie got married just last year and is blessed with a handsome baby boy, who is about three months old. He just did his child dedication some months ago; we were all there, even during the marriage,” the source stressed.

Meanwhile, a neighbour, who saw the incident, said his leg was also burnt in the process of putting out the fire in the house of Mr. Alozie before they managed to contain it and rushed the victim to the hospital.

He said, “The affected parts of his skin that were burnt were so severe that they were peeling off like burnt paper. My leg was also burnt in the process; I thank God that it was just my leg.”

When contacted, the Information Officer of the National Emergency Management Agency, Mr. Victor Akpakpan, told one of Punch correspondents that the agency had always embarked on sensitisation programmes on disaster risk reduction.

Akpakpan, who did not immediately confirm the incident, expressed the need for members of the public to avoid acts capable of getting them injured or causing disaster within their environment.