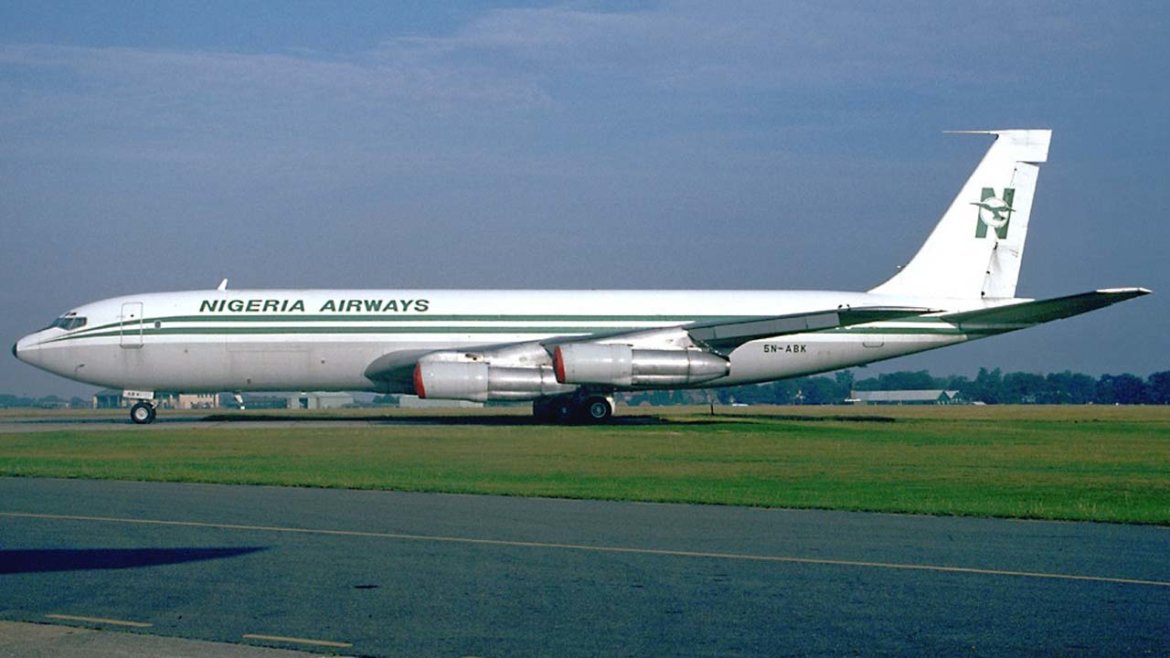 On May 1, 1959,the Nigerian Airways Limited was inaugurated during the tenure of Chief Samuel Ladoke Akintola(1910-1966) as Minister of Aviation giving Nigeria its fledging National Airline.

Chief Raymond Amanze. A. Njoku (1915-1977) succeeded Chief Ladoke Akintola as the first supervisory Minister to midwife the new airline. The first board appointed by the government provided policy guideline for the new Nigeria Airways was headed by Chief T.T. Solaru, while the first General Manager of the airline was an expatriate, Captain L.V. Messenger.
Although the basis objectives of the new airline were to carry on the business of air transportation, it was established to: serve as national flag carrier and promote the image of Nigeria, and provide a back-up service for security and defence during the periods of national emergency.

At the time the airline was firmed, there were 28 airports being maintained by the Ministry of Transport and Aviation. Two of the airports, Lagos and Kano, were designated as international airports while 12 others, including Port Harcourt, Calabar, Tiko(Southern Cameroon), Ibadan, Benin,Enugu, Makurdi, Jos, Yola,Maiduguri,Kaduna, Zaria,Gusau and Sokoto, were opened up for domestic scheduled flight services.

By April of 1977, Nigeria Airways was operating a total of 202 flights every week between Lagos, Accra, Abidjan, Robertsfield, Freetown, Banjul and Dakar in West Africa; Lagos, Kano,Rome and London on the Europe route and Lagos,Abidjan,Robertsfield and New York on the American route inclusive of all domestic airports.

In October 1977, for instance, the airline inaugurated a commercial flight to Kenya connecting Libreville(Gabon) and Kinshasa(Congo). The following year, May 5 and August 10, 1978, precisely, the airline inaugurated flight services from Lagos to New York via Accra and Robertsfield and from Lagos through Kano to Karachi via Jeddah in Saudi Arabia respectively. At the end of 1978, the airline had made 27,518 flight departures, carrying on its entire network, a total of one million, four hundred and forty-four thousand, four hundred and thirty-six (1,444,436) passengers that represents a passenger load factor of over 73 percent, the highest traffic for the airline since 1959. The airline’s fleet at this period was made of eight(8)F.27, seven(7) F.28,two(2)B.727,three(3)B.737,two(2)B.707 and two(2)DC10.

In 1982, the airline carried a total of 2,138,378 passengers on its entire network with the domestic services taking the lion share of 1,713,455 passengers. It had a reasonably good share of the international market by taking 264,132 passengers. The traffic figures improved considerably in the following year with 1,704,803 passengers on domestic route and 299,325 on intercontinental. Traffic in the Africa region was 218,994 as against 160,791 of the previous year. The airline took delivery of six additional B.737 aircraft to augment its fleet during this period.

In 1984 domestic traffic rose from 1,568,152 to 2,089,510(about 80% increase). Africa service also provided an increase of 46,475 passengers over the previous year’s figures. Intercontinental service in 1985 was 236,277 passengers as against 196,692 of the previous year. The Airbus were deployed to share international services with the DC 10. The aircraft also had some share of services on the West Africa routes.

All these revelations are contained in a 217-page book titled WT 040 NIGERIA AIRWAYS’ flight of Problems by Femi Ogunleye who was the spokesman for the airline for 25 years.

Femi Ogunleye, who is now Kabiyesi Femi Ogunleye, the traditional ruler as Towulade of Akinale in Abeokuta Local Government joined the airline in 1976 after working as Daily Times correspondent at Ikeja Airport with the likes of Kola Adesina, Francis Emelefoun/Mike Edemereyo, Andrew Diojemaou/James Bello/Richard Amayo, Sehinde Dagunduro, Demola Osinubi,Tayo Falade, Lanre Adebo, Biodun Soremekun,Babson Adeyemi, Toye Akiyode,Kunle Egbeyemi,Tunde Lisboa, Jimi Aderinokun,Dap[o Aderinola and Alhaji Adio Saka. Tragically, the airline stopped operation in 2003.
According to News Agency report “Plagued by mis-management,corruption and overstaffing, at the time of closure the airline had debts of more than US$60,000,000(equivalent to $78,115,051 in 2016), a poor safety record, and its operative fleet comprised a single aircraft flying domestic routes as well as two leased aircraft operating the international network. It was succeeded by virgin Nigeria.”

Kabiyesi Ogunleye, a golf addict, lamented the death of the Nigerian Airways on page 193 of his book with an eulogy”I love my country I no go lie, Na inside am I go live and die, When e push me so, I push am so, E push me, I push am, I no go die(originally sung by a group of pro-democracy in Nigeria)”. No doubt the book is a good read.

For most of us who flew within and outside Nigeria till 2000, Nigeria airways was our first choice. The hospitality of the airline was second to none.

The story of the Nigerian airways is a sad story. Yet those who killed the airline are smiling to the banks today while the workers of the airline are roaming the streets in perpetual penury. Till today they have not been paid their entitlements including pensions. Thousands of them are affected and some I hear cannot afford to buy drugs for their health.
Kenya Airways was inaugurated in 1977. It is still operating. Likewise the Ethiopian airline founded in December 21 1945 is still operating. The South African airways founded in 1934 is still in operation.

After the Nigerian Airways ceased to operate in 2003, President Olusegun Obasanjo(80) set up a committee to probe those who killed the Nigeria airways and ensure that the culprits were brought to book.

The committee was headed by the then Minister of Defence, General Theophilus Yakubu Danjuma(79) while the office of the Secretary to the government of the federation served as the secretariat of the committee.

After the resignation of General Danjuma as Minister of Defence, his successor, Alhaji Muhammed Rabiu Musa Kwankwaso(60) took over the leadership of the committee. The committee submitted its report to President Obasanjo who directed full implementation of the committee’s report. The names of the culprits and their companies were then handed over to the Nigeria police, then headed by Alhaji Mustapha Adebayo Balogun(69) because at that time the EFCC which was inaugurated that year did not fully take off until 2004. That was the last we heard about that issue. Today the culprits are as free as the air.

AND THEY KILLED THE NIGERIAN AIRWAYS ALONG WITH OTHERS BY ERIC TENIOLA was last modified: July 30th, 2017 by Eric Teniola

DR. LETON ON HOW FG CHEATED THE NIGER DELTA BY ERIC TENIOLA (PART 1)