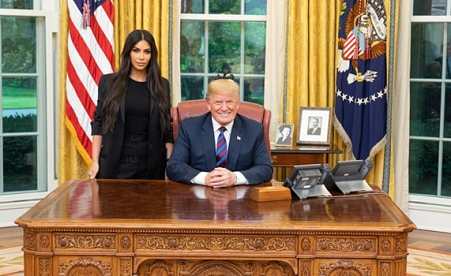 Kim Kardashian West is all business, in a pantsuit, as she arrived at the White House to meet President Trump yesterday.

Kim and her attorney, Shawn Holley, entered through the security gate for the West Wing of 1600 Penn. The meeting with POTUS has been in the works for months as Kim has been in talks with Ivanka Trump and Jared Kushner to get Alice Marie Johnson’s life sentence commuted.

Alice is the great-grandmother who was convicted for drug conspiracy and money laundering in 1997. They were her first offenses, and Kim’s taken up her cause over the last year.

Her attire all black, besides yellow heels shows just how serious Kim is about her mission. And sources say the meeting went extremely well.

“I would like to thank President Trump for his time this afternoon. It is our hope that the President will grant clemency to Ms. Alice Marie Johnson who is serving a life sentence for a first-time, non-violent drug offense. We are optimistic about Ms. Johnson’s future and hopeful that she—and so many like her—will get a second chance at life.”