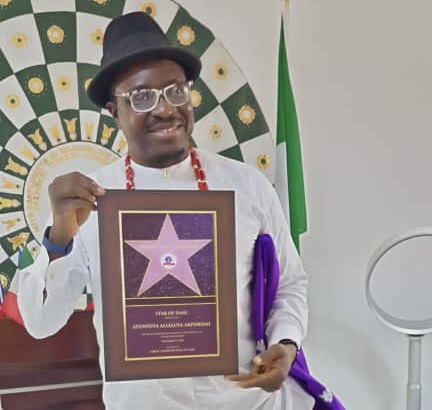 ATUNYOTA ALLELUYA AKPOBOME aka ALI BABA, is a man you can read like a book.
His interesting adventure in one of the worlds most cosmopolitan and commercial cities, Lagos, reveals that the Delta born entertainer went through fire, groomed on the streets and beaches of lagos.

From the other ranks quarters to the officer’s quarters of the OJO MILLITARY CANTONMENT, to the mosquito, flea and cold infested waterfront of the lagos BAR BEACH through the hostels of YABA COLLEGE OF TECHNOLOGY and the posh ILUPEJU area to NICON TOWN, ALI BABA deserves his recently acquired nomenclature ‘greatlagosian’

Bestowed on him by The Great Lagosians Hall of Fame, the King of Comedy was presented with the STAR OF FAME PLAQUE at his posh office and XQCE MOI studios in Victoria Island, Lagos recently.

Presenting the plaque Wale Seriki, President of the Great Lagosians Hall of fame extolled the virtues of the great entertainer describing him as a veritable role model.
Obviously elated Ali Baba, in his characteristic manner threw everyone in the office to hillarious episodes of laughter.

The ceremony however ended with a tour of the 21 century facilities of his television complex due to hit our screens soon.

King of Comedy, ALI BABA, recieves the STAR OF FAME PLAQUE of the Great Lagosians Hall of Fame was last modified: November 24th, 2021 by Reporter