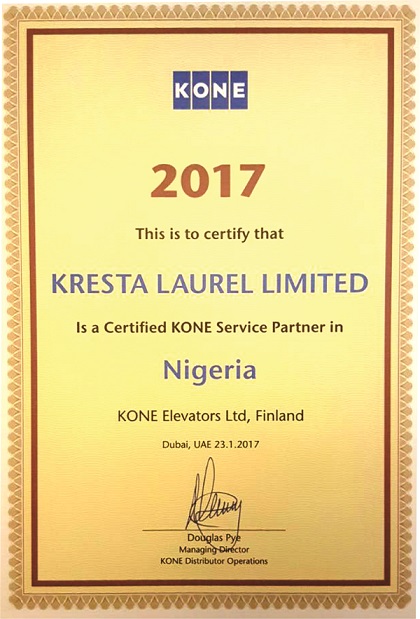 Kresta Laurel Limited was also named as one of the seven certified KONE Service Partners while the company was also recertified as an authorised KONE distributor in Nigeria. 36 KONE distributors covering 57 countries were present at the conference and they were all recertified.

Kresta Laurel Limited, the only ISO 9000:2008 certified elevator company in Nigeria has been the sole authorised distributor of KONE Elevators in Nigeria since 1999 and she has installed KONE equipment in prestigious buildings in the country such as UNION Bank, UBA, SHELL Petroleum and Bank of Industry Headquarters in Lagos. Other buildings using the technologically advanced KONE Elevators installed by Kresta Laurel Limited are the Central Bank Headquarters, Julius Berger Plc Headquarters, United Nations Country Office, ECOWAS Headquarters, National Assembly and the Petroleum Trust Development Fund Headquarters all in Abuja among many others spread across the country.

KONE Elevators, founded in 1910, is the market and technology leader in the elevator industry with a reputation of pioneering most of the game-changing innovations in the industry including the Machine roomless technology.