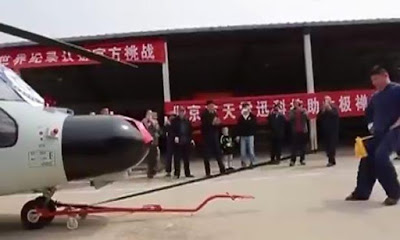 A Chinese Kung Fu expert whose news stunned many when he first dragged seven cars with his penis has become the new record holder for replicating his incredible talent, but this time on a Helicopter.

Ye Hongwei, while standing in front of spectators, recently towed a heavy military helicopter with a rope tied around his genitals at the tarmac outside the hangar in Fangshan District, Chinese capital Beijing.

In the footage, he was first seen struggling with the helicopter but later summoned the courage to drag the helicopter over 10 metres (32 feet 9 inches), beating his intended target of 8 metres (26 feet 3 inches).

After he attained the incredible milestone he received a world record certificate by officials representing the World Record Academy.

“I don’t know why I struggled in the beginning. I felt a bit nervous and unsure. But I mustered up the energy needed and started the helicopter moving.”

Ye who hails from the city of Zibo in East China’s Shandong Province,  said he has been practicing “zen tai chi” for over 30 years.

Kung Fu expert breaks World Record for hauling Helicopter with his penis [WATCH] was last modified: May 30th, 2017 by Reporter