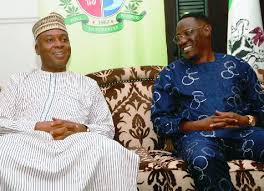 In a statement by his media aide, Muyideen Akorede, Governor Ahmed said he decided to dump the APC after much consultations with the people of his state.

According to him, “Following due consultations with the people and in response to calls by major stakeholder groups in the state, Kwara State Governor, Alhaji Abdulfatah Ahmed today defected to the People’s Democratic Party(PDP), having realized that the All Progressive Congress (APC) can longer serve as a platform for achieving the aspirations and expectations of his people,” the statement said.