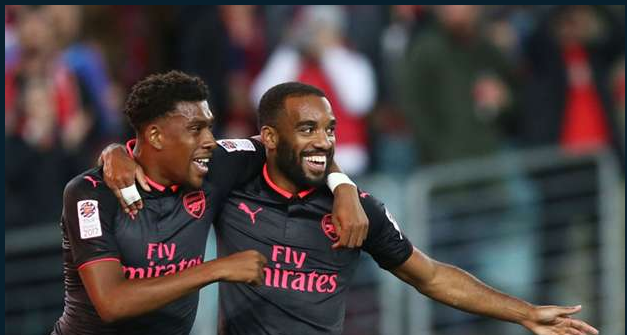 Alexandre Lacazette has opened his Arsenal account with a super strike as the Gunners begin their pre-season tour against Sydney FC in Australia.

Lacazette showed within 15 minutes of his debut why Gunners boss Arsene Wenger decided to spend big on the 26-year-old striker.

His superb strike made it the second of the day as Per Mertesacker had earlier opened the net which enabled Arsenal a 2 nil victory.

Wenger confirmed in his pre-match press conference that Lacazette would feature in both of Arsenal’s Australia friendlies this week but he started the match on the substitutes bench as fellow new boy Sead Kolasinac took his place in the back three at the ANZ Stadium.

A blend of youth and first team experience made up Wenger’s starting eleven with the English trio of Reiss Nelson, Joe Willock and Cohen Bramall thoroughly impressing just days after the departures of highly-rated academy starlets Chris Willock and Dan Crowley.

Arsenal’s highest ever pre-season attendance saw 80,432 supporters, many of whom were Gunners, witnessed Lacazette’s debut goal after he was played in following an assist from Alex Iwobi.

He was deployed in a slightly deeper role behind Olivier Giroud which could be an experiment from Wenger to show that the duo can play in the same team together.

Lacazette is exactly what Arsenal have needed for a long time. A clinical marksman who consistently gets himself into the right positions to finish chances.

His arrival has prompted Giroud to hint at a potential departure from North London in the coming weeks, but the vast competition in attack from Danny Welbeck to Alex Iwobi means Arsenal are better placed than they were last campaign.