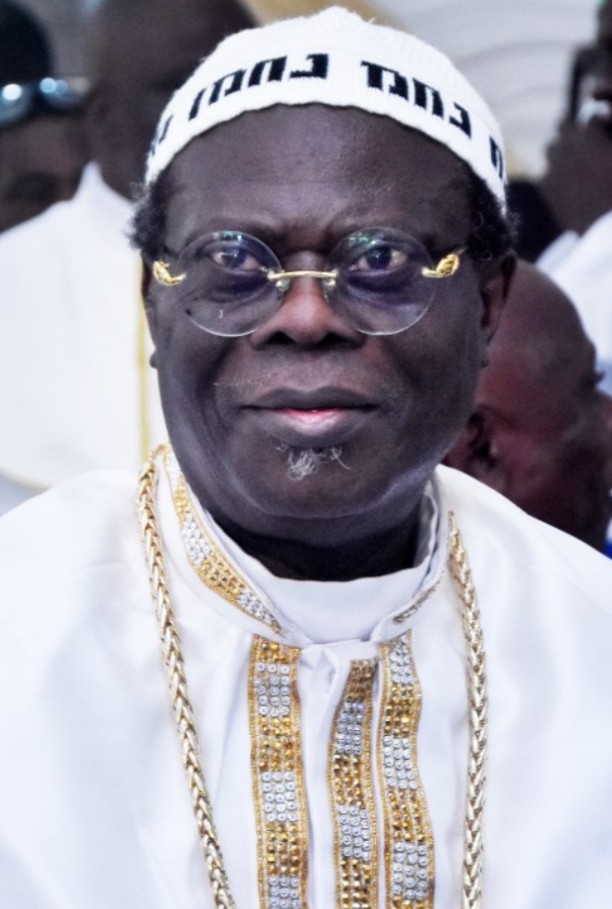 •Details Of The Classy 2-Day Event

Cardinal James Omolaja Odunmbaku is a force to reckon with in Lagos politics. He has been around since the days of NADECO and fought vehemently for the actualization of the June 12, 1993, mandate. This astute politician came, saw and has conquered on many fronts. He is not just a politician; he is a successful husband, father and shepherd.

Cardinal James Odunmbaku is the founder and presiding priest of the Celestial Church of Christ, City of God, Akiode, Lagos. A church he has run for many years while he combines that with politicking and several other businesses. It is safe to say that he is not just a party leader in APC but one who started from scratch with the party and has helped build it to what it is today.

On Saturday, September 4, 202, Pa Odunmbaku clocked 75. A mini party was held at his house that day. The venue became a mini-pilgrimage ground for many politicians and aspiring politicians, top government functionaries came visiting, party stalwarts made his house their place of abode while the less privileged in the community found a place to eat, drink and make merry.

City People’s Brand Editor, DAMILARE SALAMI 08155134152 and the Head of Photography Unit, Femi Adeleke covered the 2-day event. Below are some of the hot gists and beautiful pictures from the event, enjoy.

BABA’S WIVES STARTED THE DAY IN A SPECIAL WAY

The day began for the birthday boy in a big way. It started with Baba’s 3 wives spend quality time with their husband. They thanked him for being a good husband, father, lover, leader and many more. When City People got there early in the morning, they demanded some time with Baba. It was obvious that there was love and unity among these women. Unlike in many polygamous homes where hate and bad energy is always the order of the day, it is different for the Odunmbaku mothers. Many would even think that they were siblings with the way they did their things in unity.

THE DAY OPENED WITH SHOWERS OF BLESSINGS

The day started with some respected men of God in the state and CCC City of God Parish visiting Pa Odunmbaku for prayers and thanksgiving to God. Some of Baba Odunmbaku’s children made it early enough for the prayers and were joined by his beautiful wives. Although it was strictly a family affair, some political juggernauts also came around and joined in the prayer session! Although it was a rainy day, that didn’t stop people from turning up. People from different walks of life; in fact, by the time it was noon, the compound couldn’t contain the number of guests that had arrived. People kept coming and going, yet, the space provided was still filled to the brim.

MORETIZ EVENTS MADE IT A BIG SHOW

Saturday wasn’t the main celebration according to inside sources but it was a well-planned and befitting birthday bash for someone of Cardinal Odunmbaku’s stature. There was plenty of food and drinks and music was provided by a fast-rising band in Lagos. The decoration was top-notch and everything went as planned. The event was managed by Moretiz Events. They made a big statement about their capabilities. In all, it was a great show.

DOS AND HIS TEAM WERE PRESENT

The Ojodu LCDA Chairman, Mr David Olusegun Odunmbaku (DOS) was also present to celebrate his dad. He came with his team members and they made a statement on the first day of the event. A lover of youths, Mr Odunmbaku pulled a large crowd on Saturday. Many people were spotted wearing ‘I Support DOS’ cap.

Bolaji Yusuf Ayinla (popularly known as B.Y.A) is a Nigerian Politician and Member of the House of Representatives of Nigeria representing Mushin II Federal Constituency was one of the politicians that attend the Saturday event. He came quite early and joined in the morning prayer session for the birthday celebrant. BYA has a stronghold in Mushin having served as a representative at the state house of assembly for three terms before moving to the federal house under the APC platform.

Bishop Kayode Williams is the leading pastor and Bishop of Christ Vessels of Grace Church Inc. He is also an International and the Director-General of the International Prison Rehabilitation Mission, an outfit that helps in rehabilitating prisoners. He was one of the ministers of God that came to celebrate Pa Odunmbaku at 75. He also rendered heartfelt prayers to God on behalf of the celebrant.

The Ojodu LCDA 5th Assembly ably led by its speaker, Hon Opeyemi Apatira with the support of the mayor, Hon David Odunmbaku presented a very beautiful portrait to the celebrant. According to an inside source, the portrait was made with coconut. It was a beautiful masterpiece. Present to present the gift on behalf of the entire Ojodu LCDA was the Chairman, Mr David Odunmbaku, Hon. Speaker, Mr Opeyemi Apatira, Hon. Olalekan Peters and Hon. Bolarinwa Lawal.

A happy man will be known when he’s around his wife; this statement was proven to be very true when cardinal Odunmbaku stormed the reception venue where he received some of his guests in the company of his three wives. Baba danced in like a king and he was well accompanied by his women. Did you notice the beautiful outfits of Baba’s wives? They were dressed in the same cloth and same style. It was an expensive purple lace with purple gele.

AT THE THANKSGIVING SERVICE ON SUNDAY

Day two of the event was a Sunday. It was a thanksgiving service that held at the Celestial Church of Christ, City of God Cathedral, Lagos. The crème-de-la-crème of the Lagos APC all stormed the church to thank God for Pa Odunmbaku and celebrate him in a big way.

THE CHOIR DID WELL

Trust Celestial Choir when it comes to music, they always deliver. The City of God Cathedral Choir made a huge statement with different genres of music. Their performances were top-notch. They made the birthday boy dance so well that many people didn’t believe is already 75 years.

GOV SANWO-OLU ABLY REPRESENTED BY HIS CHIEF OF STAFF

The Governor of Lagos State, Mr Babajide Sanwo-Olu has huge respect for Cardinal Odunmbaku and he does not hide that in all his dealings with the ace politician. Gov Sanwo-Olu was absent at Baba’s thanksgiving service because of some pressing state functions but he sent his right-hand man, the Chief of Staff to the governor, Mr Tayo Ayinde to represent him. Mr Tayo was well received and he delivered the governor’s felicitation speech to the celebrant. Cardinal Odunmbaku spoke so highly of the governor as well as his chief of staff, Mr Ayinde; revealing that both have done well as individuals and worthy representatives of the APC.

One of the high points of the service was when One of Baba’s sons who also happen to be a shepherd at the City of God revealed that the Cardinal got a new name during the morning prayer session that was held on his birthday. He revealed that Baba was given the name David from the realm of the spirit. Sup Evang Odunmbaku is a spirit-filled minister of God and a prophet. During the service, he released some prophetic utterances upon the congregation.

Not many musicians can be like Harmony. He has carved a niche for himself in the gospel genre. Harmony is a plus-size male singer with so much power. He was the special song minister at the thanksgiving service and he did so well. Everybody danced, praised God and talked so highly of him after the event.

Mrs Funke Adepoju is the first child of Pa Odunmbaku and also the executive secretary of the Lagos Water Regulatory Commission. She has done so well for the commission since she was appointed last year. She appeared in two beautiful outfits at the event. The first was a beautiful black and gold lace before she later changed to stunning white attire.

Mrs Adepoju and Mrs Tinubu-Ojo are obviously very close friends. They were spotted together at the event having heart-to-heart talks. When Mrs Tinubu-Ojo was leaving the event, she was seen off by her friend, Mrs Adepoju, City People can confirm authoritatively.

One of the people that made a fashion statement at the event was Hon Prince Anslem Udoka Orobo, the board of trustee chairman of the Ndigbo in APC. This Lagos-based eastern politician was dressed in a well-fitting traditional attire with his staff. He looked like an Eze in the real sense of it.

IYALOJA GENERAL OF LAGOS CAME THROUGH

The foremost name that comes to mind in Lagos when market women are mentioned in Lagos is Mrs Folashade Tinubu-Ojo, the Iyaloja General of Lagos. She is the leader of all market women in the state. She was one of the big names that came to grace Cardinal Odunbaku’s birthday. She was dressed in gorgeous white attire.