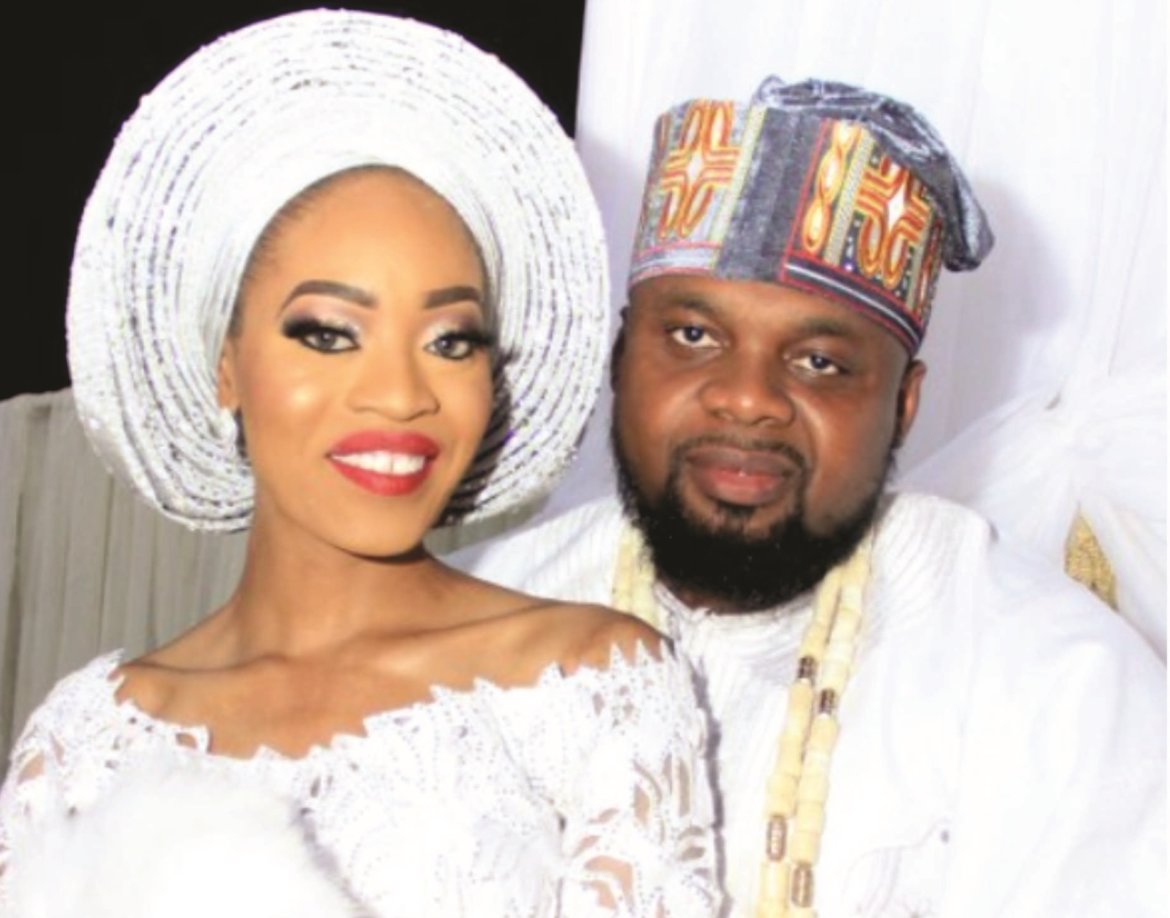 THE GROOM AND THE BRIDE GLOW IN WHITE

You can’t help but appreciate the strong bond that the handsome Prince of Ada, Prince Oyedokun and his bride, Basirat Oyindamola Badejo shared at their wedding. They were the cynosure of all eyes, as they dazzled all through. Prince Oyedokun, who is the handsome Prince of Ada is the son of a late Osun Prince; whose younger brother is the current Oba of Ada. Prince Oyedokun is into dredging and he runs popular Xchnage Exposures. While his darling wife, Basirat, is a Medical Doctor in United States. Prince Oyedokun was first sighted at a few minutes past 3pm during the engagement. He was chaffeur driven in a white and black Rolls Royce. He dazzled in a white flowing aso-oke agbada, matched with a black shoe. He was full of smile as he came to seek the hand of Basirat in marriage from her parents. Basirat made her first appearance at a few minutes past 3PM in a sparkling white Rolls Royce. Slim and angelic Basirat dazzled in a white fully embellished aso-oke outfit. Her well wrapped silver ash bridal headgear was well tied to match her face. Even the handsome Groom, Oyedokun couldn’t take his eyes off her while she danced in with her cliques of friends.

PARENTS OF THE GROOM AND BRIDE NOT LEFT OUT

If there is anybody whose joy knew no bounds at the Oyedokun and Badejo  wedding, it was the parents of Basirat and Prince Oyedokun. Alhaji Ridwan Badejo, the father of the bride was more than happy to see that their beautiful daughter had found her missing ribs in Prince Oyedokun.  Though, Alhaji Rilwan and his wife, Basira are based in the US, yet they left no stone unturned to make sure their daughter had one of the biggest weddings in town. Though, the grooms father is late, his younger brother, who is Ada King, Oba Adegboyega Oyedokun made sure all that was needed was provided to seek the hands of Basirat Badejo in marriage. The two families didn’t waste time before they exchanged gifts between themselves. The traditional marriage anchors (Alaga),  is Sir K and Taiwo Davies, made sure time was utmost used.

There was plenty time for guests to relax and mingle for many hours after the Engagement. The reception proper kicked off at a few minutes past 8pm. Though the Traditional Engagement kicked off in a separate hall, guests were ushered into the other well decorated hall, which was used for the grand reception.  Guests couldn’t help but appreciate the unique transformation done by the event decorator and event planner. They judiciously made use of White and Gold which turned the venue into heaven on earth. The couple’s corner was beautiful transformed with rose flowers which kept shinning and it romantic aroma filled the air. The beautiful couples were ushered into the hall at few minutes past 8pm by the MC, MC Princewill. Prince Oyedokun, was spotted in a 3 pieces black and white suit with a black bow tie, while his beautiful wife, Basirat was in a white tube dress. Her hair was beautiful packed to reveal her diamond jewellery.

At few minutes past 5pm, His Imperial Majesty, Oba Abdul Rasheed Akanbi, the Oluwo of Iwoland, walked into the well decorated hall majestically with his darling wife, Queen Channel. They were quickly provided a seat at the special table. Prince Oyedokun is like a son to Oluwo of Iwoland even before he became the king. He did not have a hiding place at the event, as the musician on the bandstand sang his praise, while the event lasted. At a few minutes past 9pm, he coordinated the cutting of cake and gave his chairman open remarks. He told the couple to always communicate in their marriage and advice that marriage only survive where couple see each other as friends.

Mrs. Basirat Badejo may be living far away in America but we can tell you authoritatively that she has not forgotten her roots in Lagos, Nigeria. This was why she picked special aso-ebi for her clique of friends. They were all looking pretty in yellow and brown tulle lace. Among those sighted were: Alhaja Kudirat Adesope, Alhaja Owolabi (London), Alahaja Afusat (Lagos), Alhaja Toyin Afuwape (Lagos), Mrs Bola Ogunmodede,  Mrs Bisi Aroworade, Mrs Biola Aroworade, Mrs Dayo Adeyinka, Mrs Sola Adeyemo, Mrs Olubukola Owoyele, Ibidun Olotu, Lorita Ikoro to mention few.

One of the friends of  bride’s mum who was wore special tuile lace outfit, was Otunba Sade Adesoye. She was  the cynosure of all eyes as she stepped in with Bimbo Pitan, who is her younger sister. She had no hiding place despite designing her dress as a simple gown. Her diamond jewellery did the talking, as she was later joined by her darling husband, Otunba Gboyega Adesoye, the Gbaderogun of Ijebuland. Her beautiful in-law, Mrs. Morufat Kalajaiye and her daughter, Joke Ogedegbe, a top fabric merchant with her store in Lekki, was also in attendance, with Nike Badru Sanda who runs Chubbynikkyfabrics,  Otunba Gboyega and his wife chatted freely like 2 love birds while the event lasted.

BUNMI OLATUNJI HAS NO HIDING PLACE

One celebrity fashion designer that we always watch out for at any social gathering these days is Lagos celebrity babe, Bunmi Olatunji. She runs that popular luxury brand, Bunmibunmi. She is one of Nigeria’s fashion queens who knows what to wear for any party. For the Oyedokun wedding, she spotted a royal blue lace which was beautifully sewed to fit her lovely shape. She walked into the hall with a pretty friend of hers, whose looks also complemented her, while Lola Fine face joined her later. She was one of the guests of Biola Simba, the beautiful wife of Murphy Simba.

It was an array of many Lagos bigger boys who came to show love to one of their own. Murphy Simba, the tall handsome husband of Abiola was the one who led many of them.  Among many sighted were Akinsiku of Lagos, TJ Dosumu, Alabama of Chicago, Kunle Alabi, Aare Bashir Fakorede(Oil Magante) and host of others.