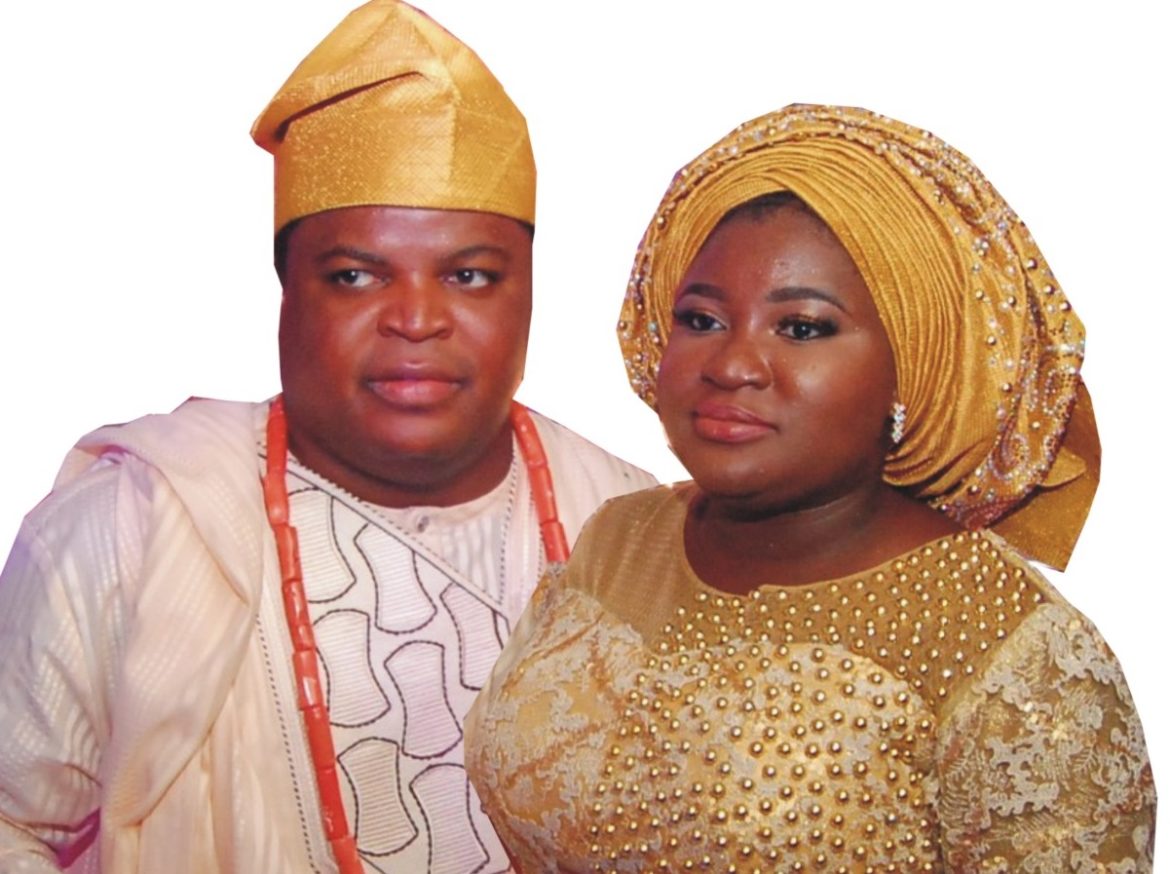 The joy of every parent is always full whenever they are giving their daughter hand in marriage to a good looking and responsible man and the Adeji’s are not an exemption to this.

The families of Adeji and Olaosebikan took Saturday 14th day of July 2018 to tie the Nuptial knot between their amiable daughter Ewenmhe Joy and handsome Olamide Opemipo. Cultural diversity did not stop this love birds as the wife is from Akoko-Edo and the husband is from Sagamu in Ogun State. The two venue event kick started at exactly 10am with the native exchange in the bride father’s house in Magodo. The two families who are of different culture introduced themselves and the reason why they have gathered.

The groom came in grand style in company of his friend. He was looking all stylish in the white Agbada representing a typical Yoruba man. His friend served as his entourage and they were neatly dressed in white and a pink cap to match.

Trust me, every woman know how to steal the show on their wedding day because it is all about them. Check out the bride looking adorable and stylish in her native attire of a peach blouse and two wrapper representing an Edo bride. He neck was adorned in a gold chain and traditional beads. The groom who did not forget to blend his own culture with that of his bride also used traditional beads to adorn his neck and wrist. The native exchange which is also known as traditional marriage involved the paying of bride price and dowry and other things as the Edo customs demands.

While the paying of the bride price was going the bride’s father spoke in tears of joy. He said his only daughter was his gold, but he just had to let her go, and he employed the groom and his family to be patient with the bride and also give her time to learn their culture as it is different from what she has always known.

It was an array of Obas as seven kings from Akoko Edo honour the traditional wedding. Did we tell that construction guru’s who were the friend to the father of the bride stormed the event. Politician also came in their number to celebrate the groom who was a part of them. The bride’s father willingly and happily gave his daughter’s hand to her husband in prayers. The traditional section came to a close at about 3’0clock as all die were cast for the reception at Funplex Event Centre Magodo Lagos.

The ambiance at the hall was second to none as it was beautifully designed in white and gold. The 1000 capacity was filled to the brim as guests came in their numbers.

The walk way was decorated in white tiles and petals that distinguishes it from every other party of the hall. Sceptre Live band was at the top of their game as they welcomed guest with beautiful songs of Yoruba and Edo dialect.

Bolatito Charlse Shokunbi popularly known as Tito compered the event. He got guests laughing at his diverse comical expressions. Tito welcomed the groom’s parent Mr. Olayide Olaosebikan and Mrs. Oyefunke Hastrup while family members and friends joined them as they danced joyfully to the podium.

The bride’s parent Mr.& Barr, Mrs Ernest Adeji gave a grand entry in company of their family and friends.

Hail the newest couple Mr. Olamide & Mrs Joy Olaosebikan as they danced in company of their friend who were gorgeously dressed.

The friend of couple created a middle space as they danced in. The couples danced into the hall in their second appearance. The groom was dressed in a cream Agbada and the bride was dressed in a Gold lace and her head gear was adorned with petals and white stones. Guess who danced better! The bride left no stone unturned as she danced joyful to DJ snatch’s beat.

Did we tell you that DJ snatch changed the atmosphere to a groovy one? He gave collection of hip hop music that would turn up any youth and the couple and their friends  danced till Tito intervened.

Past Stephen Adebowale led to opening prayer wishing the couples years of bliss in their marriage and safe journey to everyone who honoured them.

Everyone was seated  and the chairman of the day was introduced in the person of Dr. Musa Alhasan. He admonish the newly wedded couple to be truthful at all times. He also advise friends to stay away and not interfere unnecessarily.

Have you ever heard about the mother-in-law dance? It was specially introduced by Tito as the mothers of the groom and bride tried to teach themselves different dancing style.

The three stairs cake was decorated in white and a touch of pink and Yemi Makanjuola who is a close friend of the bride handled the cutting of cake.

Another friend of the groom handled the Toast and collection of gifts for the couple. DJ Snatch took over the stage with his music collection to the amazement of the guest.