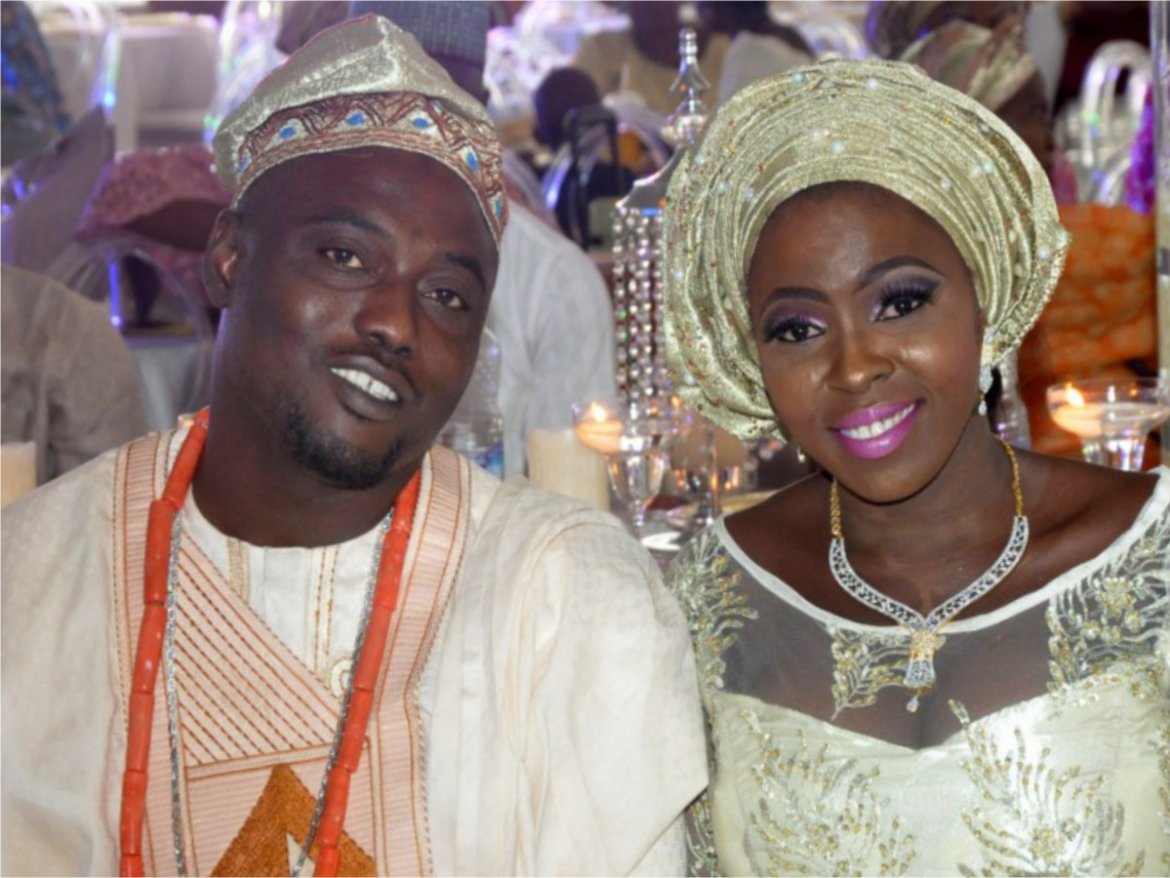 Sunday 7th May, 2017 was a very busy weekend at Ogudu, Lagos for one of Lagos big caterers, as Alhaja Atinuke Alex-Oni and Alhaja Zainab Arinola Gbadamosi joined their children in a classy Nikkah wedding. The groom, Olawale Yekeem Abdul Alex Oni is the son of late Alhaji Eng. Olatunde Shamsideen Alex Oni. The bride, Basirat Oluwatobiloba Gbadamosi is the daughter of late Alhaji Muniru Aremu Gbadamosi and Alhaja Zainab Arinola Gbadamosi.
Very important personalities stormed the wedding. City People Society Reporter, MOTUNRAYO KESHINRO attended and brings you spicy gists.
THE VENUE EXTENSION
The colourful wedding took place inside the new M2 marquee at MZ Arena Association Avenue extension in Ogudu, Lagos. The venue is along the popular Alapere-Ogudu expressway and the car park was filled to the brim. There was enough parking space which accomodated as many cars as possible. The lovely hall was well decorated in snow white. It had over 2000 guests from the 2 families and every one had a place to sit. The transparent Chavari Chairs and Burgundy table decorations all added beauty to the event.

OPENING PRAYER
By Uztaz Idris
The event started some minutes past 1pm. The opening prayer was led by Uztaz Idris Zakarriyah (Iman of Ekotedo Centre Mosque). He did the Nikkah session by pronouncing the couples as husband and wife according to Islamic rite.

GROOM SISTERS WERE UP AND DOING
The groom sisters were up and doing at the event. They are 3 in number. Ibilola Lola who is the eldest is also a Caterer and she was busy attending to guests. They all wore purple lace matched with Coral Headgear looking beautiful.

Meet The Couple
The couple looked nice in their choice of outfit for the day. The groom is a graduate of University of Lagos and studied Physics Education. He is also a teacher at the Federal Government College, Ijanikin. Dark, hardworking, and many more were some of the astounding qualities which made Basirat fall in love with him. Basirat Oluwatobiloba is also a graduate of University of Lagos and into online business. The beautiful babe with a good character made ‘Wale choose her as the love of his life.

BETWEEN THE COUPLES MOTHER
At every wedding, mothers are mostly the happiest, as it is the joy of every mother and parent to witness such great occasion. Alhaja Atinuke Alex Oni and Alhaja Zainab Arinola Gbadamosi wore a beautiful smile all through the event. They dazzled in their expensive out fits. The grooms mother, Alhaja Atinuke, Brides mother, Alhaja Arinola Gbadamos both wore Turquoise blue lace outfit with a matching headgear.

OBA OF LAGOS REPRESENTED BY 3 WHITE CAP CHIEFS
The paramount ruler, His Royal majesty (CHRM) Oba Rilwan Akiolu, the Oba of Lagos is like a father to the grooms mum. So many had expected him to attend but the Olowo Eko was out of town so he sent 3 of his white capped chiefs. He was represented by 3 out of the 23 white cap chiefs. These white cap Chiefs are selected to represent Oba Rilwan Akinolu at events he can’t attend. The names of the 3 white cap chiefs present at the event are high Chief Adesoji Ajayi Bembe (the Obanikoro Of Lagos) High Chief Waheed Ayeni (the Shashore of Lagos), High Chief Ibikunle Bailay (the Olowo Jankande of Lagos). 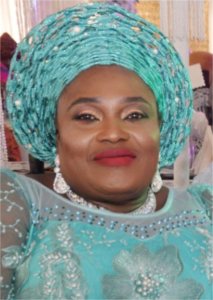 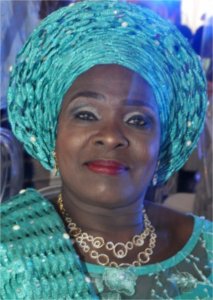 THE 4 OLORIS SHOWED LOVE
Oba Rilwan Akinola, the Oba of Lagos 4 Olooris showed their love to the groom’s mother by honouring her invitation to the event. They were among the early callers and they spent many hours. They all stepped out in Brown Lace Aso Ebi with their head gear matching with their Royal beads and looking so young and radiant.

REAR ADMIRAL OFIK AND WIFE, PAT CAME
Real Admiral Ofik and his beautiful wife Pat was at the event. He is the groom’s mother son and also the god father of Wale. He was the Chairman of the occasion. He arrived early and spent many hours.

GROOMS MOTHER’S FRIEND’S IN BROWN  ASO EBI
Some of the grooms mother’s friends turned up on their brown lace Aso-ebi to grace the event. Over 100 guests who are friends to the grooms mother wore wore this Aso Ebi to show their love and support. Some of her friends present at the event are: Saidat Alayaki, Yinka King, Lola Akalajobi, Dolapo Kotun, Funke Olowe, Arin Obala, Nana Yakubu, Funke Kotun amongst others.

GROOMS FRIENDS STORMED EVENT
Many the grooms friends stormed the event. They were all looking so cute and handsome in their grey traditional outfit with wine cap to match it up. Those present are Ibrahim Ismail, Mustapha Czar, Emmnuel Gandi, Chidi Nkonye, Tochi Njoku (Youngod), Thanni Lateef amongst others.

BURGUNDY AND GREY WAS THE WEDDING COLOUR
The colours of the day were Burgundy for the brides side and Grey for the grooms side. This 2 colours did justice to the guests outfit which came out nice on everyone.

BRIDES FRIENDS WERE ALSO PRESENT
Few of the Brides friends were present at the Event. They all trooped out in their Burgundi Aso-Ebi watched with Burgundi head gear and they all reflected it on their make-up looking so beautiful and gorgeous on them. Those present are Bukola, Tawa, Lammy Belz, Kaffy, Debola, Bisola, Morufat, Frances, Tosin Bisi, Latifat, Fadekemi amongst others.

FELLOW CATEERERS ATTENDED
Knowing so well that the grooms mother Alhaja Atinuke Alex Oni was one the top catering service in Lagos state, Some of her colleagues in the Profession squeezed out time out of their busy schedules to honour her on her son’s wedding. Present at the event are Malas Catering Services, Abilar Catering Services, Buttered Fingers, Delicacies, Boladel Chops, Morin Kitchen amongst others.

THE OTUNS WERE PRESENT
The Otun family from the grooms side were at the event. Some of them could not make it to the wedding, but the family now represented by Taiwo Otun and Tinuke Otun.

OBA ADAMS AND OLOORI RISIKAT TOO
Oba Adams (Onikate Of Ikate) and his pretty wife Oloori Risikat stormed the event. The grooms mother stood up to welcome them as she walked toward them and exchanged pleasantries till they took their seats.

RAFIU OGBARA STEPPED OUT
Rafiu Ogbara, the Jagunmolu of Ikorodu stepped out. This tall, dark and handsome man was looking so radiant as he stepped out in his white outfit matched with his titled white cap to honour his sister, the mother of the Groom.

OVER 30 VENDORS WERE THERE
The party had over 30 vendors who were handsomely paid to handle one thing or the other. They include, spicy Kitchen Catering Service, Sumptuous yours Chops ‘N’ Grills, Dollars Delicacy, Darin Small Chops, and Cocktail, Palace Food Catering Service, Bar Motion Scopy Fries, Bonix Drinks among other.

FAITH BAND ON THE BAND STAND
On the band stand was the popular and well talented Faith Band Music, knowing him for his unique ways of singing, he dished out good songs which gave the audience that urge to get on their feet dancing.

No more land grabbers in Lagos, once...