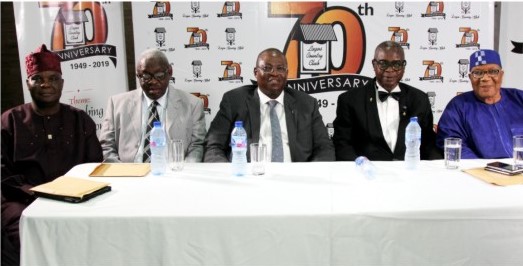 Africa’s foremost family club, the Lagos Country Club, is set to roll out the drums in celebration of its forthcoming 70th Anniversary. And if the outline of events reeled out for the epoch-making celebration are anything to go by, then members of the Lagos Country Club and their friends are in for some really exciting moments designed to give “Something for everyone,” which is the theme of the anniversary.

Speaking at the Media Briefing held last week inside the Cool Room Section of the club, to intimate members of the press with the club’s 70th Anniversary arrangements, the president of the club, Chief Tajudeen Akande, the Tadese of Ikorodu, took the gathering through the humble beginning of the 70 years old club. “The Lagos Country Club was officially founded on the 3rd of August, 1949 and incorporated under the Land (Perpetual Succession) Ordinance Cap107 on 30th October, 1956 with John Stanley and Lewis Greensmith Nelson as Trustees.

The original site of the club was at the hanger of the Air Force used during the World War II. The hanger was later taken over by the West African Airways Corporation resulting in the club moving to the mess used by the Royal Air Force during the war, sharing territory with John Holts supermarket and Grange School. Later, following the search of a bigger apartment, the club moved to Joel Ogunnaike in Ikeja G.R.A. where it is now presently located,” the President explained. And with pride, he listed out all the ten game sections in the club that cater for the over 14,000 members who visit the club week in, week out.

Using the opportunity to present a progress report on all the ongoing projects in the club and run through concluded ones under his stewardship, he assured everyone of the commitment of himself and the management council to begin and conclude work on all ongoing projects as soon as funds are available, placing on record the massive financial assistance of Sir (Dr.) Kesington Adebutu and the Lagos State Government in achieving their developmental projects. The very articulate president eloquently explained why it is imperative for the club to celebrate it’s 70th birthday in a big way, reminding everyone present that 70 years in the life of an individual, a nation, a society, a corporate entity, etc, is not a joke! He appreciated the entire Management Council of the club, the legal Trustees and past Presidents of the club for their selfless services and support for his administration.

Unveiling the beautiful 70th Anniversary logo of the club, the Director General of the Lagos Country Club Anniversary committee  and a former past president of the club himself, Chief Babatunde Okunuga, explained the rationale of the club’s anniversary logo which is predominantly gold combined with black colour.

According to him, “we have used gold and black because they are associated with illumination, love, compassion, courage passion and wisdom.” He added that “Gold is a precious metal that is associated with grandeur and prosperity while black is associated with power, fear, mystery, strength, authority, elegance and sophistication, all of which make the Lagos Country Club a force to reckon with.”

Reeling out the line up of activities scheduled for the celebration, Chief Okunuga explained that the celebration would span different spheres of life that are germane to humanity which will include activities under business, social, fitness, religion, corporate social responsibility and Awards. The anniversary celebrations will run through March to August 3rd when the Grand Ball will take place.