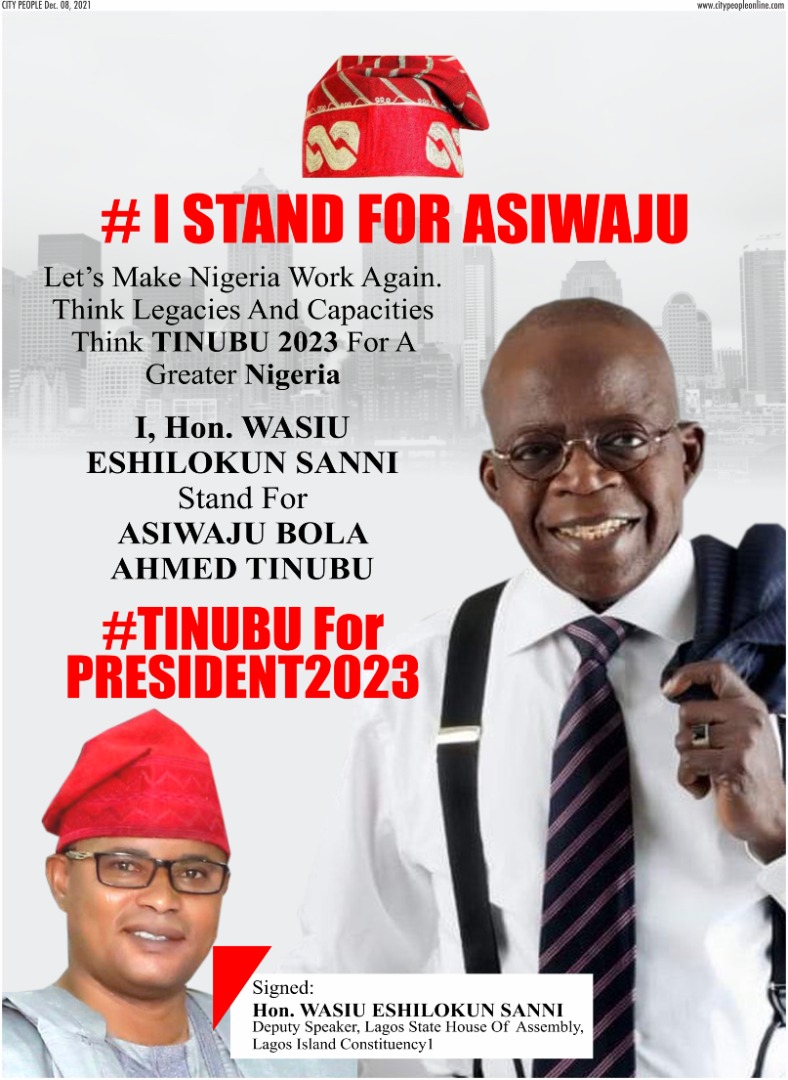 He is the most talked-about personality in the African continent right now. Every corner you turn to in the country, everyone is talking about him. He is the subject on the lips of Nigerians. No man in Nigeria has ever attracted such deafening clamour to run for the presidency. His name is Asiwaju Bola Ahmed Tinubu, the man many say has been destined to become Nigeria’s next president. Though he has not officially declared to run for the presidency come 2023, his 2023 train has taken off early. Right now, he has the momentum and is firing on all cylinders. Anyone who stands in his way could get crushed politically, such is the force with which his train is moving. And with every passing day, more and more distinguished Nigerians are lining up behind this political Icon and Master Strategist and saying loud and clear, “I STAND FOR ASIWAJU”. And one of them is the admirable Deputy Speaker, Lagos state House of Assembly, Hon. Wasiu Eshinlokun Sanni.

If truth be told, these days, they rarely come any better than the irrepressible Deputy Speaker of the Lagos state House of Assembly, Hon. Wasiu Eshilokun Sanni. He is of a different breed. He is not just arguably the most experienced Lawmaker in the House, he is by far one of the most accomplished. Yet, he carries himself with a humility that stuns everyone, especially his younger colleagues, most of whom were still learning the ropes in politics when the distinguished Hon. Eshilokun was already making great strides on the political turf. That explains why they all have tremendous respect for him. They don’t joke with him. He is often always calm and collected. Dislikes being loud. His incredibly amiable nature makes it easy for them to warm up to him and drink from his fountain of knowledge and experience.

But perhaps his greatest asset lies in his unquenchable desire to serve his people as selflessly as he possibly can. That is what drives him. That is what has kept him going for so many years. And if you ask members of his Lagos Island constituency II, they will tell you he is one politician who has been of immense service and value to them. They couldn’t have asked for a better representative. He is what you call ‘man of the people.’ He throws his doors open to his constituents and gives them unhindered access to reach him. As they come to him with their unending loads of personal requests and demands, he avails them of his resources. He gives selflessly. He serves tirelessly. But those who know him closely are not surprised about any of these or how hugely accomplished he’s turned out. He’s learned from the best, they say. Hon. Wasiu Eshilokun Sanni is a proud and unapologetic mentee of the APC national leader, Asiwaju Bola Ahmed Tinubu. They share a father and son relationship that goes back a long way. It is no secret that the Deputy Speaker has the ears of Asiwaju owing to the implicit trust the Jagban Borgu has had in him since the time he worked as SA and SSA to the former governor on Political and Legislative matters over twenty years ago.

This is why City People’s Senior Editor, WALE LAWAL (08037209290) chased after the ever busy Deputy Speaker to share his thoughts on the on the ongoing clamour for Asiwaju Bola Ahmed Tinubu to contest for presidency come 2023. And he didn’t disappoint. Expectedly, he spoke about the national leader, a man he has tons of admiration for, with such eloquence and passion that would make Asiwaju extremely proud of his own. The interview was held at his magnificent Ikeja GRA residence, a place where we were told the Deputy Speaker seldom invites journalists to. Read the full interview in this week’s City People magazine or on the City People online platform. Yes, this is the Lagos Deputy Speaker Saying it loud and clear, “ I STAND FOR ASIWAJU.”