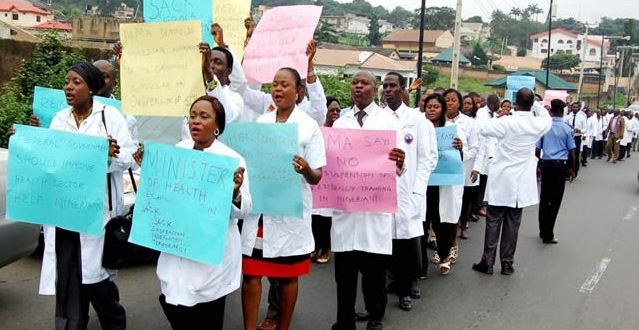 Following the affirmation by the police that health workers are exempted from the 8 p.m. to 6 a.m. curfew, the Lagos State branch of the Nigerian Medical Association (NMA), on Thursday, reversed the sit-at-home strike which it earlier embarked upon at 6 p.m. on Wednesday.

The sit-at-home directive was a response to the arrest of health workers by officers of the Lagos State police command for defying the curfew, despite their exemption from the curfew as essential workers.

The police in Lagos Tuesday night arrested several essential workers, including medical doctors, journalists, bankers and others, stating that they were not exempted from the curfew.

This infuriated the doctors’ union which called for the sit-at-home protest on Wednesday.

While giving the notice of the sit-at-home strike on Wednesday, the leadership of the Lagos NMA said the strike will be effective until the conflicting directives by the state government and law enforcement agents on the status of essential workers is resolved.

On Wednesday evening, however, the police hierarchy notified its officers about essential service providers, including doctors, who are exempted from the curfew.

“The force is not oblivious of the sensitive, indispensable, patriotic and front line role of the nation’s workforce that falls within the category of Essential Service Providers in government efforts to contain the spread of COVID-19 pandemic.

“To this effect, all essential workers including medical personnel, ambulance service providers, journalists and firefighters remain exempted from the movement restriction orders as well as the national curfew,” police spokesperson Frank quoted Mr Adamu as saying.

In its reaction, the leadership of the NMA said in a statement on Thursday that it has discontinued the sit-at-home strike after the police and the Lagos State governor reached out to clarify the status of doctors and assured them that there would be no further harassment of its members.

“The sit-at-home order issued on the 19th of May is hereby reversed and our members are hereby directed to resume work from 6 p.m. today 21st of May 2020 (this affects those on call duty). ”

“The Nigerian Police Force has reached out to the association to clarify and give assurance of cooperation with all health-workers. This, they have also done in the media. The executive Governor of Lagos State, Mr Babajide Sanwo-Olu was exemplary as his timely intervention from the late hours of May 19th helped prevent worsening of the situation.

“The association has further received assurances from Mr. Governor and the top hierarchy of the police that no health workers will be further harassed in the course of their lawful efforts to sustain services in the middle of the pandemic,” the statement partly reads.

The association added that the appeal from the people of Lagos State is difficult to resist considering the fact that they will be most hit by the situation.

It resolved that doctors in Lagos State, under the auspices of NMA, have the responsibility to partake actively in the fight against COVID-19 and the delivery of quality healthcare to the citizenry for the entire period of the pandemic and beyond.

It urged the Lagos state government to ensure clarity at all times on the ‘exempted’ status of healthcare and other essential workers for the entire period of the ongoing lockdown/restriction of movement.

The leadership of the association added that it will continue to monitor the situation and will not hesitate to take any action to protect the safety of its members.

The night curfew (8 p.m. to 6 a.m.) was imposed by President Muhammadu Buhari across Nigeria to prevent further spread of the coronavirus which has caused at least 200 deaths in Nigeria and infected over 6,000 people.