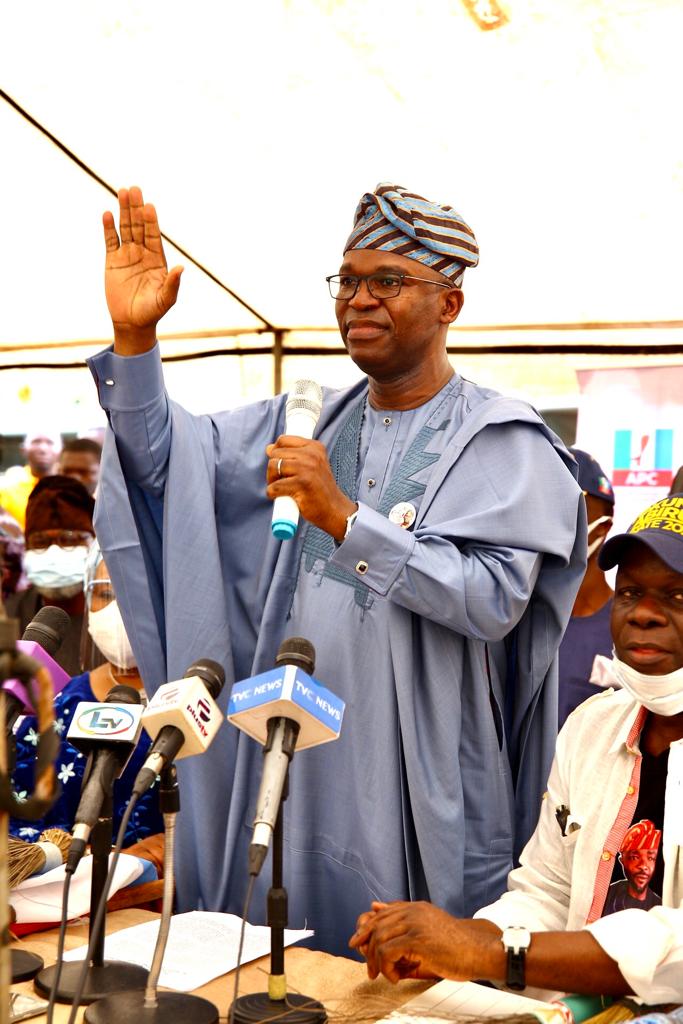 On Thursday, September 3, 2020, we made a critical decision across the length and breadth of Lagos East Senatorial District. On

that day, the leaders and members of our great party, All Progressives Congress (APC) voted overwhelmingly in our direct primary election to affirm my nomination as our party’s candidate for the Lagos East Senatorial Bye-Election slated for October 31,

I thank our leaders and members across Epe, Ibeju-Lekki, Ikorodu, Kosofe and Somolu for this historic and humbling decision. This

affirmation, for me, is perhaps the highest honour I have ever received as a citizen of the Federal Republic of Nigeria since I was

born some decades ago. The mandate comes with a huge responsibility to bear the flag of our party in the forthcoming byeelection, a mandate and responsibility I appreciate and do not take lightly.

With great honor and humility, I accept this nomination as the APC candidate for Lagos East Senatorial Bye-Election. With a grateful

heart, I deeply appreciate the highest level of endorsement I received from our party leaders, my friends and compatriots who

initially expressed interest in the position but graciously supported me, and the teeming members of our party. I thank the Chairman

admirable tradition of excellence in our state in the past one year.

healthcare, security etc. His leadership in the management of the Covid-19 pandemic has been exceptional. I assure him of my support and cooperation in moving the state forward in the years ahead and I thank him.

Most importantly I pay homage to our national leader, my leader the great Asiwaju Bola Ahmed Tinubu former Senator and

Governor Emeritus of Lagos State. The leadership, vision and stability you have provided since 1999 has led to the rapid and

unparalleled development of Lagos State and your political astuteness and commitment has been critical in sustaining progressive politics in the whole of Nigeria and building the ruling party, the APC. I thank you Sir from the depths of my heart.

At this point, let me assure our leaders and members that I will never betray the trust they have reposed in me. Rather, as we

approach the bye-election and afterwards, I will build on this trust and join forces with all public office-holders elected on the platform

of our party to build upon the foundation of progressive governance the party has laid for our dear country since 2015.

I am fully aware that our party, APC, came into being with a clear vision. At its conception, the party was envisioned to chart a new course for a better future for our nation and people; promote true democratic values in our political space; prioritise the welfare of

Nigerians across every social strata; eliminate poverty through job creation and ensure the primary purpose of good governance, among others. Anywhere in the world, these goals constitute the ideals of progressive politics to which I am committed.

Dear leaders, with due respect, I need to point out at this stage that I am a natural progressive. I was born into a family of

progressives. My late father, Justice M.A.O Abiru was not just a political associate of late sage and first Premier of Western Region,

Chief Obafemi Awolowo, but was also elected a Senator of the Federal Republic of Nigeria in 1979 on the platform of the Unity Party of Nigeria (UPN). In addition, many members of my family are known to play active and committed roles in our party in Lagos State. I have personally supported our great party as a card carrying member for many years and I have embraced progressive politics, supported progressive causes and voted for progressive parties all my life.

I will be proud to carry the banner of our party into the forthcoming bye-election and by the grace of God and our hard work in the campaigns, I will be a Senator of the Federal Republic of Nigeria with resolute focus on the welfare of Lagos East, Lagosians and Nigerians at large. I will work hard with all our leaders at different levels and my colleagues to promote policies that will not only make Lagos State a better place, but also put our fatherland at a vantage position in this highly competitive and diversified global economy.

If and when, by the grace of Almighty Allah, I am elected as a Senator of the Federal Republic of Nigeria representing Lagos East

Senatorial District my priorities and commitment to my constituents and our party will include the following:-

1. High quality of representation: I will represent our party and the good people of Lagos East with integrity, commitment, and passion for the people leveraging all the experience, competences, knowledge and relationships I have acquired over three decades as an economist, chartered accountant, banker, commissioner for finance, senior banker and CEO. In all my activities as a Senator, I will be guided by the manifesto and policies of our great party and I will honour the legacy of my predecessors including Senators Justice M.A.O Abiru

2. Trust and Character: All my career, I have striven to uphold the highest ethical standards, character, and professionalism

M. A. O Abiru. I am coming to this race fresh from successfully executing the mandate of the Central Bank of Nigeria (CBN) to rescue the troubled Skye Bank and midwife the

transformed Polaris Bank. I pledge to bring the same character, trustworthiness, integrity, commitment and diligence to bear in this new role.

3. My total focus will be on the welfare of my constituents in Lagos East Senatorial District and Lagos State in general. I will use the position of Senator and my energy and resources to further their well-being, welfare, prosperity, empowerment and security.

4. I will be loyal to our party, our great leaders and the members of the party who have unanimously and overwhelmingly entrusted me with their mandate and humbled me with their confidence and mandate.

In my role as a Senator, my legislative activities will be anchored on two over-riding considerations:-

· Joining hands with my senior distinguished colleagues in the Senate, Senator Oluremi Tinubu and Senator Olamilekan

Adeola ‘aka” Yayi and the Honourable Members of the House of Representatives from the state led by my dear brother,

Right Hon. Femi Gbajabiamila to further efforts to secure a Special Status for Lagos State in view of its role as Nigeria’s commercial, financial, industrial, media and entertainment capital; the pressure on Lagos State infrastructure due to federal establishments like sea ports, airports and military installations; and the massive rate of migration into Lagos State from all over the country

District in particular and Lagos State in general:-

· Speedy completion of the rehabilitation of the Lagos-Ibadan Expressway

· Development of the tourism potentials of the Ibeju-Lekki area with enhanced development of hotels, resorts, golf courses and other world class entertainment and hospitality projects in the region

· Sustained industrial and commercial investment in industrial/commercial areas within the district including Ikorodu, Epe, Ibeju-Lekki, Shomolu and Kosofe

· Urban renewal, regeneration and security in the entirety of the Senatorial district.

· I promise to establish and institutionalise programmes for the poor, the vulnerable, the unemployed, the aged and for youths and women generally to create empowerment,

employment generation, capacity building, employability and poverty reduction within all parts of the Senatorial District.

I have done this as a private citizen and will sustain and enhance such activities as an elected Senator.

I accept this nomination with humility and gratitude and I appeal to our leaders and members not to rest on our oars. We have

party. Now we have a great task ahead to canvass voters from house to house and convince undecided or unenthusiastic

registered electorate to vote APC in the bye-election.

voters. This figure is an invaluable political asset we must deploy as party faithfuls to make an unambiguous statement for the

political future of our state.

To all our leaders and members in Lagos East, this bye-election presents us opportunity to prove this point. This means we must

diligently convince all our registered members not just to vote on the day of the bye-election, but canvass undecided registered electorate to cast ballots overwhelmingly in our favour.

Let us now rise to this urgent duty call.

Let us also rise in defence of our great party.

Let us massively deliver victory to our party on October 31, 2020.