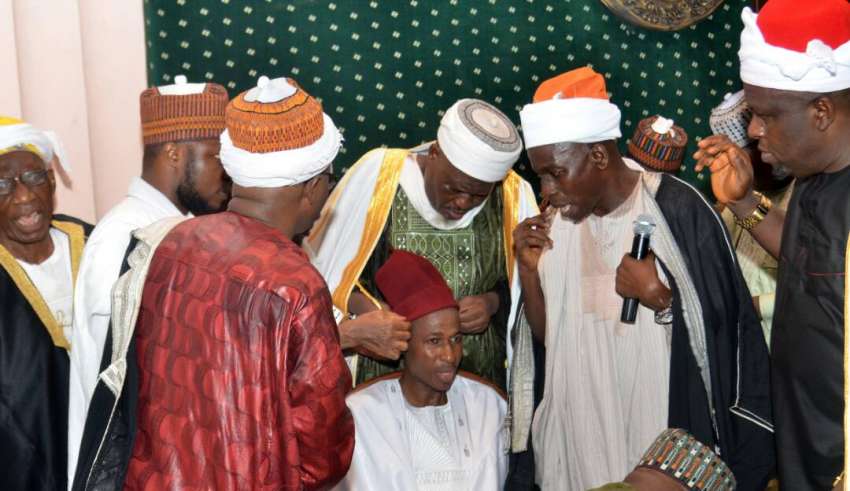 The Muslim community in Lagos were in jubilation mood last week Sunday 16th of September as Alhaji Eng. Sulaiman Oluwatoyin Abou-Noila was turban as the new Chief Imam of Lagos.

His emergence came after the 9th Chief Imam of late Sheikh Garuba Akinola died last year December 2017. The new Chief Imam who is in his 40s is a top Engineer. He is also a top Muslim scholar of note who knows about the teaching of the Holy Book.

Perhaps, we should tell you that his Uncle is the Baba Adinni of Lagos, Sheikh Abdul Hafeez Abou (CFR). City People investigation reveals that Alhaji Hafeez Abou was pintched but he can’t hold two title, so the need for him saying his Niece, Sheikh Sulaiman Oluwatoyin is the best candidate. This is because they are not only from one family, he is also well grounded in Islamic teaching.

In case you don’t know, let tell you about Sheikh Sulaimon Nolla.

Alhaji Chief Imam Engr. Sulaimon Oluwatoyin Abou-Nolla was born on the 16th September 1976 in Surulere to the family of Abou Nolla and Odunsi-Eshilokun royal family of Lagos.

For his Tertiary education, he gained admission into University of Technology, Bauchi and later transferred to the University of Ilorin where he bagged his Bachelor Degree in Engineering (Electrical) in the year 2000. He did his National Youth Service in the same year at Apapa Local Government, Lagos State.

During the course of his NYSC Service, he enrolled at the Darul-Dawat-Wal-Irshidad, Isolo for his Idadiyah certificate (2003) and later completed his Thannawiyyah education is 2006 after which he proceeded on holy Pilgrimage to Makkah and Madinah in 2006.

He joined Linkway Technologies Limited as a Telecommunication Engineer in 2007 where he served in various capacities as Telecomm Engineer attached to the Nigerian Police Commands in Kano, Kastina, Kwara and Zamfara State respectively.

Alhaji Sulaimon Abou-Nolla is a member of Nigerian Society of Engineers (NSE) and a registered member of council for regulation of Engineer in Nigeria (COREN). He acted as Imam of Ike-Oluwa Mosque, Surulere. He served as Welfare Officer and member of Executive Committee of Shamsdeen Thomas Adisa Memorial Mosque, Old Secretariat, GRA, Ikeja.

In furtherance of his educational pursuits, he is presently studying to obtain a Master degree in Public Administration at the University of Lagos and Islamic Studies student at the National Open University Nigeria.

He is well travelled and has visited Ghana and Saudi-Arabia. He is very much involved in Dawah activities and the spread of Knowledge as an Islamic Studies Teacher. He is one of the Ustaz at the Ike-Oluwa Mosque Arabic School and also a member of the Executive Committee of the Mosque.

Alhaji Sulaimon Abou-Nolla is happily married and blessed with children.

COMEDIAN BILL COSBY TO BE SENTENCED FOR SEXUAL ASSAULT CONVICTION

Money- Dear millennial, you can be broke and still be happy