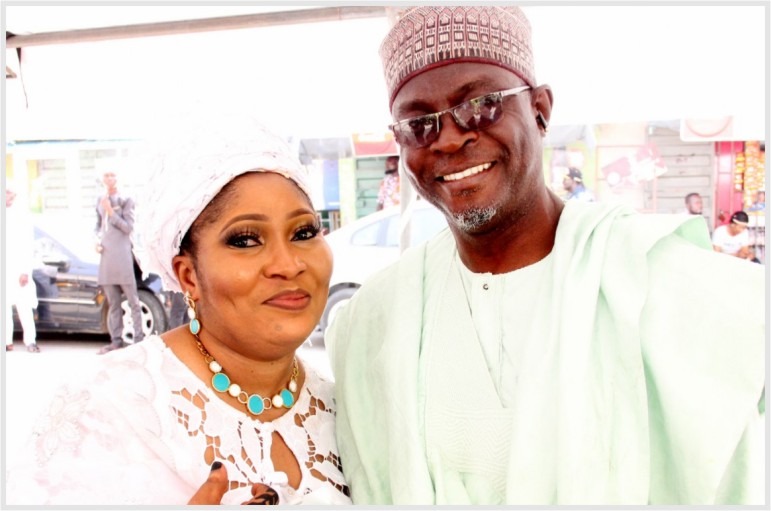 The quality of a life spent is not in the length of years lived on earth but the number of lives touched and transformed for the better. This was the reason families, friends, loved ones, colleagues and associates gathered on Sunday, February 7, 2021, to pray and celebrate Alhaji Abdulraheem Adetokunboh Ajide, a man who died on February 3, 1991, but still had his legacies living on 30 years after.

Men of timber and caliber across the country came to honour this great man who has impacted his generation and bowed out at a time when many people thought he was needed the most. He came, saw and conquered and 30 years after his death, his work still speaks volumes. The fidau took place at his house on Road 202, E close, Festac Town, Lagos. Although it was a Sunday event, people still took out time to honour this great man. City People’s DAMILARE SALAMI 08155134152 and Senior Photojournalist, ABDULRASHEED SANNI were there and here are some of the hot gists for your reading pleasure.

Expectedly, the fidau started with opening prayer which was handled by a top Islamic Cleric in Festac town, Sheik Imam Musa Badmus. He shared some of his memorable times with Alhaji Ajide and took out time to encourage all those in attendance to live a life that would make people have a worthy remembrance of them after their death. He further explained that death is not the end of any man, rather, it is a means to the endless life hereafter.

One might begin to wonder who Alhaji Ajide was that made so many Islamic clerics churn out in their numbers even after 30 years of his demise. A further inquiry into his life and testimonies from the people in attendance revealed that Alhaji Ajide lived his life solely to transform many destinies that have become pillars of their societies today. He was one of the pioneer Muslims at Festac, it, therefore, made much sense as Festac Town Muslims Community honoured him with their presence.

If there is anyone whose entry took the guests by surprise, it was that of Sheikh Abdulrahman Sulaiman Adangba. He drove all the way from Ilorin down to Festac to be at the fidau. He was later saddled with the responsibility of sermonizing the guests and he did it perfectly.

It was an emotional moment for Barrister Rasheedat Oyeronke Ajide as she spoke well of her father. Being the first child and only daughter of Alhaji Ajide, Barrister Ronke rose up to the challenge of letting those who didn’t know her Dad meet him through her vivid description. She said: “Alhaji Abdul Raheem AdetokunbohAjide was born on the 1st of February 1951 at Lagos Island to the family of late Garuba Abu-Bakr and Ayisat Adalemo from AjaseIpo in Irepodun L.G.A. Kwara State. He attended St. John Primary School Aroloya Lagos Island, Ahmadiya Islamic Arabic School and Muslim Teacher Training College both in Surulere. And also took other correspondent education related courses with British institutions in the eighties.

“His passion for education made him organised private lesson for students and upon his graduation from the teachers training college, he was employed into the Lagos state teaching service as an Islamic religious knowledge teacher at 3rd Avenue Primary school before he died.

“He was a strict disciplinarian, community development advocate and a peace-loving father to his children and other children alike in every community he lived, above all a devoted Muslim.

“He moved into Festac with his family in 1977 and aligned himself into the then Festac Muslim Community where he contributed the best part of his life to the development of the Muslim community and humanity at large. He was the Muazzin to the present Chief Imam General at the Ratibi level before his demise and one of the foundation members of Oba Bi OlorunKosi mosque. He also served as a member of the building committee of the 22 Road Central Mosque just to mention a few. He died in a motor accident on Sunday, February 3, 1991, at Ebute Meta, Lagos on his way to settle a rift between some family members. She concluded”.

Comrade Ayo Adewale is a public figure in Festac. He was a former Chairman of Amuwo Odofin LCDA. He is a man loved by the people and a well-known activist. He was one of the students of Alhaji Ajide in the 1970s and also a good friend of Barrister Oyeronke Rasheedat, Alhaji Ajide’s first daughter. He also took out time to talk about his former teacher who he said was fondly called Malim during his hay days. He noted that the late Alhaji Ajide had moulded so many destinies and he was among them. In his conclusion, he prayed deeply and heartedly for the departed and also explained that his friend, Ronke Ajide had inherited her father’s kindness and brilliance right from childhood.

“Rasheedat was one of the few pillars I had when I was campaigning for the chairmanship position. She gave me her car, a Toyota Yaris saloon car and never came back to lobby at the office for any contract when I won the election although she had all the opportunity to do so. I think she learnt that from her dad, he said.

One of the most recognized group at the event was the Alasalatu Oba Bi OlorunKosi Mosque who came in a large number and also in uniformed attire. They all wore sky-blue lace with a sky blue scarf. Of course, they were the most unique group at the event. They also had some photography sessions with Alhaja Ajide and her siblings.

Music was supplied but it was in the Islamic way. Sheikh Abdulrazaq Haidara did that in style. With his tunes of Islamic songs, he had most of the guests at the event on their feet dancing. Those who didn’t stand up moved their bodies at intervals as a way of showing that they enjoyed the music.

His message was simple and straight forward but it centered around humanity. Sheikh Abdul Rahman Sulaiman Adangba while preaching noted that what will make anyone remain relevant after 30 years of his demise was simply his contribution to humanity. Citing Late Alhaji Ajide as a perfect example, Sheikh Adangba pointed out that the whole essence of humanity was to be able to leave a legacy that would outlive every individual and that can only be possible when you have a positive influence on the person nearest to you.

Aside from Barrister Rasheedat Oyeronke Ajide, the other children of the late Alhaji AdetokunbohAjide are Fatai Olukayode Ajide, (politician/printer, (a graduate of LASU), Ahmed Olanrewaju Ajide, Treasurer NURTW FESTAC branch, and Yusuf Ajide, a technician

READ ALSO: MEET THE COUPLES WE ADMIRE THIS VALENTINE