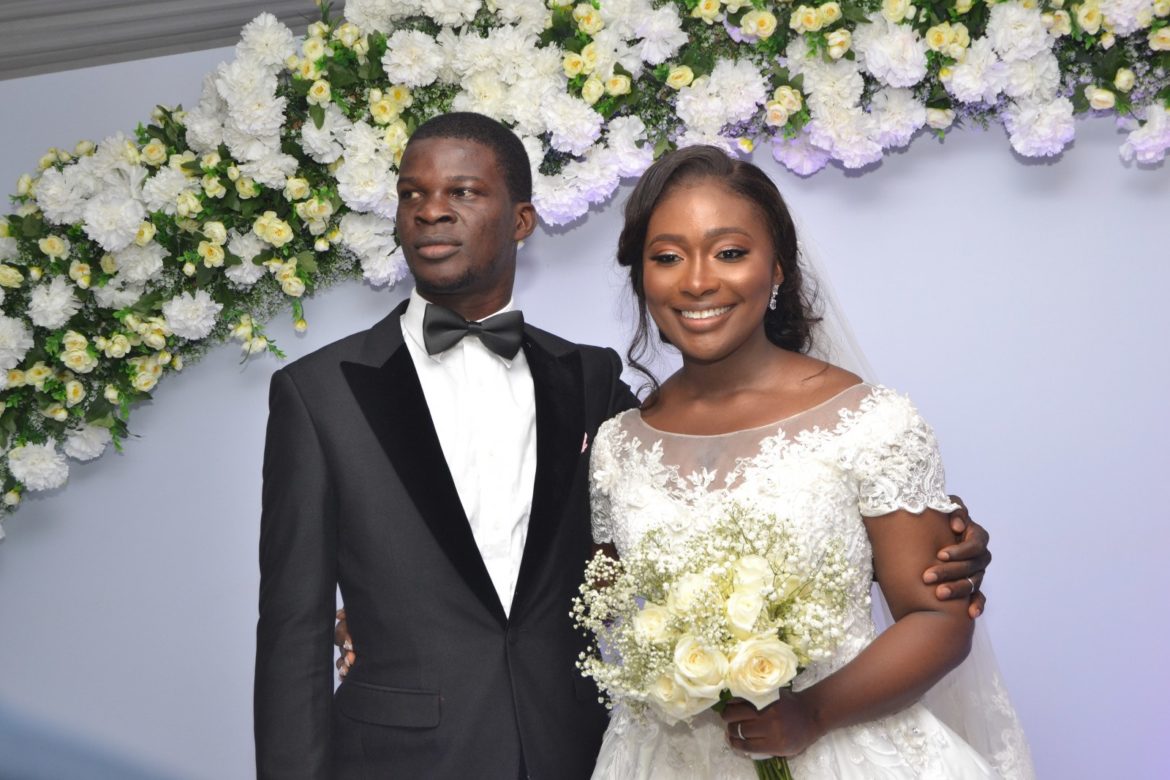 It is a joyful thing to get married to one’s best friend. The love story of Oluwatosin Odubela and Ibukunoluwa Odejayi. The two love birds from the family of Olusegun Odubela (SAN) & Mrs Olubimpe Abike Odubela and Pastor Johnson Kayode Odejayi & Pastor (Mrs) Yemisi Kehinde Odejayi had their traditional marriage on Thursday, 20th December 2018 at Nicon Town Estate Recreation Centre in Lekki, Lagos.

And on 22nd day of December 2018 the white wedding took place at the International Church of Christ on Adeola Hopewell Street, VI, Lagos. And reception was at Queens Park Event Centre, Oniru Estate on Corporation Dirve, Off Ligali Ayorinde Street, VI, Lagos.

Below are the blow by blow details of the wedding.

THE SOLEMNIZATION OF HOLY MATRIMONY

The International Church of Christ in Victoria Island Lagos and its environs vibrated on Saturday 22nd, 2018 as Ibikunoluwa Odejayi walked his beautiful bride down the Aisle.

The weather was right. It is a season of love and everything was in place for this great union. The solemnization of the Holy Matrimony started exactly 11am, with Evangelist Chris Ogbonaya, Evangelist Obaje John, Evangelist Shadrack Obara and Evangelist Abolade Abolarinwa as officiating ministers.

The bride’s father walked her daughter to the altar and gave her hand out in marriage. There were exchange of vows, and rings, after which the officiating minister pronounced the couple husband and wife. The entire church prayed for God to help the newly wedded in the journey of marriage.

Marriage register, was signed and the couple were presented to the congregation.

The Queens Park event centre was filled to the brim with dignitaries from all walks of life. The crème-de-la-crème of the society honoured the reception party. The ambience at the queens park hall was second to none and befitting of a queen. The environment was serene and there was maximum security for lives and properties.

Popular Lagos comedian MC Lively who is also the friend of the couple was the masters of ceremony. He handled the show with so much expertise. Mc lively a graduate of Law who turned comedian cracked several jokes as he introduces himself, the parent of the groom and bride as well as the Chairman.

The parent of the groom and bride were cheered in the company of family members and friends as they danced into the hall.

The couples danced to DJs bee’s grove as danced in with the bridal trains. The bride and groom are powerful dancer and they grooved heavily for their big day. There was a prayer section after which the chairman came on board for his speech.

The chairman of the occasion was His Excellency of Rt. Hon. Comrade Phillip Shuaibu, (Deputy Governor, Edo State) admonished the couple to live in peace, love and understanding. He said the keys to a long lasting marriage is love, trust and forgiveness. In his words, he told them to avoid any form of interference from parents, family members and friends. He prayed for a long lasting healthy relationship in their marriage.

Ibukunoluwa and Oluwatosin had their first official dance after have been pronounced husband and wife. Dj Sbee gave solemn grooves as the couple danced in each other’s arm.

It was their first dance and they enjoyed in without the interference of parent family members and friends. Did we tell you that the bride was a perfect dancer? Give it to her. She entertained the guest with her various dance steps.  Shortly after the couples dance came the father/daughter and mother/son dancer.

After the toast, to the bride and groom, the bride tossed her bouquet or let us rather say she gave the bouquet to one of her best friend.

She is an icon in the music industry and she brought her game on for the Odubelas and Odejayi. Her style of juju music is a force to reckon with. Her sonorous voice is not comparable. Queen Ayo Balogun is a versatile performer and she thrilled the dignitaries present.

Her live band would want to make anyone dance. She is not just a singer but also a great dance and she made sure the guests had a great time.

The influx of captains of industries, Senior advocates of Nigeria, business moguls, royal fathers, top-notch socialites, Big-wigs in politics and their luxurious cars into the NICON Town estate recreation Centre Lekki Lagos on Thursday 20th December 2018 was a pointer that a high personality was having an event in that environs.

The joy on the face of the bride’s parent spoke millions about how excited they were that their daughter Oluwatosin has found love and ready to join another family. The groom’s parent were elated that their son Ibukunoluwa has found his missing ribs and a good wife in addition to the family.

The recreation centre of NICON Town Estate, Lekki became a beehive of activities as it received an unusual member of guests. A beautiful ambiance and warm reception was created in the hall as it was beautiful decorated in white and peach flowers. It was a beautiful sight as the peach flowers were mixed with green flower giving it a unique look.

Ace television broadcaster on Lagos television Foluso Ogunyimi who turned professional marriage engager and also the CEO of Alarede School of professional Engager was one of the Alaga’s for the day. Ayandoyin Okeoluwa who co-anchored the event with Mrs Foluso Ogunjimi did a great job.  It was a combination of excellent entertainers as they thrilled the guest with their various joke’s from the beginning to the end of the event.

The bride’s father Mr. John Olusegun Odubela (SAN) is a member of the Nigerian Bar Association and the International Bar Association. He is also an ex-commissioner for education, Science and Technology in Ogun State during Governor Amosun’s first term. He is the head of chambers of the firm Rickey Tarfa & Co Lagos. He is an active member of the Island club, a club her joined over 24 years ago. He is a member of Abeokuta Sports club and also has tradional titles from Lagos, Ogun and Osun State. You can’t go wrong if you call him the Bamofin of Ikenne, Otun Omoba of Gbogan in Osun State, Otun Bamofin of Ikosi in Kosefe Lagos and also the Otunba of Sagamu. He is not just a scholar but also a top-notch socialite. Chief  (Mrs) Olubimpe Abeke Odubela is one of the top-notch fashion designers in Nigeria who runs her own fashion brand in conjunction with other business.

IT WAS A PEACH AFFAIR

The groom and brides family dazzled in peach aso-ebi as that was the colour code for the day. Guests were seen in different gorgeous designs of peach lace adorned with luxurious jewelries. Friends of the bride and groom also rocked the colour of the day with a touch of gold.

The tall, dark and handsome groom Ibukunoluwa danced in company of friend wearing a well-tailored. Green agbada with a blend of traditional bead giving him a royal look. He greeted his family and his wife family while prostrating before he was allowed to sit on his seat.

The bride Oluwatosin came out with a smile that could steal any man’s heart. In the midst of her sibling and gorgeous friends. She danced in and she kneels to greet the two families. She danced to her husband seat, fitting the cap on his head and the audience gave a round of applause. She picked the ring of all the gift items and they were joined together according to the Yoruba tradition. The Alaga Ijoko popularly known as Sokoyokoto asked the newly joined to kneel as their parent, family and well-wishers prayed for them.

The only male band, globally known as Faithful took charge after the closing prayer. They changed the atmosphere as they began to dish out groovy rhythms to the guest.

Faithful band is known for an excellent performance and this traditional wedding was not an exceptional.

The cord of love among the families of Amosun and Odubelu is so strong and cannot be broken. This was evident as Dr. Olufunsho Amosun stepped out in style to honour the wedding ceremony of Oluwatosin Odubela and Ibukunoluwa Odejayi. She was not represented by came in person to show support and love for the newly wedded.

It was an array of honourables and senior advocates of Nigeria at the traditional wedding. Indeed it was a gathering of the high and mighty. The list is numerous but we have got few.

The Secretary to the State Government of Edo State, Barrister Osarodion Ogie was the Co-Chairman, whilst the Deputy Governor of Edo State Rt. Hon. Comrade Philip Shaibu was the Chairman.

Many Commissioners from Ogun State also attended, among whom were Commissioner for Culture and Tourism Rt. Hon. Bashorun Muyiwa Oladipo, Commissioner for Urban and Physical Planning Mrs. Ronke Sokefun, who is now the Chairman of NDIC.

We also had in attendance the Chief Judge of Ogun State, Hon. Justice Mosunmola Dipeolu

The Governor of Kebbi State, Senator Atiku Bagudu was also represented by 2 of his children.

Mr. Bube Okorodudu a socialite per excellence was also in attendance.

Popular Actor, MR. LATIN, Takes Over As President Of TAMPAN