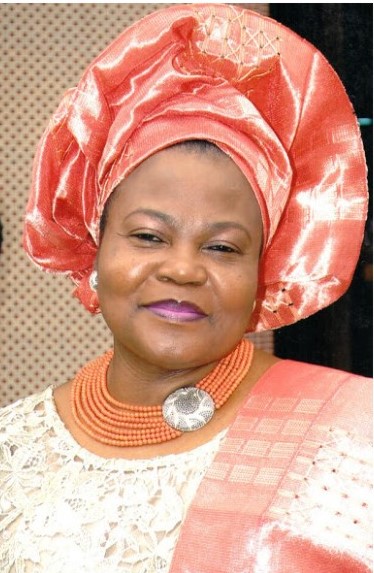 It was not pleasant news when the death of a popular female lawyer, Barrister Folashade Adetiba was announced by the family a few weeks ago. It sent a lot of uproar into the camp of many friends, and well-wishers especially her colleagues in the legal field. They were dealt with a big blow as death took away one of their most cherished colleague, sister, mother and friend. The deceased 2 children were the worst hit, as they could not contend with the grief of losing a special mother like theirs. The late legal luminary died on March 23, 2019, in Ikoyi, Lagos just 4 weeks to her 64th birthday which is on April 20th.

A 2-day funeral arrangement was held for her burial in Lagos. Her journey to mother earth started on Wednesday, 1st of May 2019 with a wake keep service/night of Tributes at Grace Garden in Lekki where guests were dressed in purple and the funeral service took place at Our Saviours Church, TBS, Onikan.

It was a gathering of important personalities from all walks of life who came to give their last respect to the adorable and energetic lawyer in her lifetime. A memorial website was also created in memory of the foremost lawyer whom they call ‘’Aunty Sade’’ where people are sending in their tributes. Until she passed on, she had made a lot of marks and left an indelible print in the legal world.

The deceased who was a UK accredited mediator, a solicitor and advocate of the Supreme Court, a teacher and legal consultant sits at the family court of Lagos State, she is a child rights consultant and expert and the legal secretary of the diocese of Lagos Anglican Communion. The accomplished lawyer who has had a post call experience for 33years is the founder of Folasade Adetiba & Co., a progressive, and professional business law firm. During her 60th birthday, 4 years ago, She gave a glowing tribute and reflected on her life from the many things she went through within 10 years between age 50-60.

She thanked God for the day and appreciated those that came to rejoice with her, saying: “I am happy and thank God that when I reflect on the things I have gone through, my being alive today, I have sound mind, I am favoured by God and God has been taking good care of me.“Finding Jesus so many years ago has helped me to take care of all the things that should have weighed me down and this is why I look young.“I still want to do more for God, save more lives, touch my generation and the coming generation. I want to do Kingdom work. God has given me energy and skills and I do not want them to be wasted. I have done well, but I still want to do more and I am available for God.” As much as Barrister Sade Olabisi Adetiba nee Olulade wanted to do for the Lord, the cold hands of death snatched her away but it was a happy ending for her having lived a fulfilled life hence she was celebrated in a joyous way. Her husband is late and she is survived by 2 children.

Up until February 2010, she was the deputy managing director, corporate and legal services, as well as the company secretary of the Industrial and General Insurance Plc. Adetiba rose from the position of a pupil state counsel at the Federal Ministry of Justice, where she was employed in 1978, to the post of Deputy Director, Civil Litigation before retiring in 1996. She became a pensioner at the age of 45 when her peers were still struggling to find their feet. Between 1978 and 1996, she had a tough time coping with the pressure of work and dealing with some of her colleagues who behind her back passed insensitive comments on her childlessness. But she was hardly distracted from her work. For 13 years, Folashade Adetiba was married without a child. But rather than allow herself to be weighed down by anxiety, she committed herself into building a brilliant legal career in the public service.

She had granted many interviews on this and according to Punch newspaper, ‘’Recounting her experience, Adetiba was full of praises for her late husband, who she described as understanding and who kept encouraging her during those trying times. She said, ”Being married without a child for 13 years is no joke. But my husband was not worried for a day. He kept on encouraging me and actually allowed me to focus on my career, even when my colleagues started misinterpreting my sense of duty. They said I had all the time because I didn‘t have a child to distract me. Yet my husband was not bothered. For many years, it was just the two of us and he was the kind of person who didn‘t care what I cooked as long as it was food. You could continue to give my husband a meal of rice for days, he would not be bothered. Being a hardworking man, sometimes both of us would arrive very late from work.”Contrary to the assumptions of some of my colleagues, I was able to concentrate on my work. But I was dedicated because I felt that it was my duty to give my best and to justify my pay. Thank God, it paid off in the end. God rewarded me. I wouldn‘t know how many people it happened to, but I was doubly promoted at a time when almost all those I worked with made recommendations that I deserved it. I was able to prosecute seemingly difficult cases and got rewarded with more complex cases, which should have been handled by more senior colleagues. On why she left service,

”I had to leave because of the belief that career women did not understand how to take care of their families. At the time I was leaving the public service, I had to choose between staying and taking care of my family. Although I was on Level 16, I had to quit. Even the former attorney-general of the federation, the late Chief Agbamuche, said I was leaving at the peak of my career. He said he expected me to strive to go up to level 17 and encouraged me to stay. Before then, I had been without a child for 13 years after I got married. By the time the ministry started moving to Abuja, my son was less than four years old. I felt that I should honour the Lord, who was so kind to me to accede to my prayer by giving me a son, by caring for him in a family environment. I had to make a choice, even though at the time, one could say my career was going to suffer. But I thought it was more important for me to raise that child in honour of what the Lord had done for me. Later, God gave me a daughter as a reward for my sacrifice. So I had to leave because I couldn‘t take him to Abuja and leave the father here in Lagos. Happily, I had served for 18 years and I could retire. By the time I turned 45, I became a pensioner,”.

She was the best all-around student in the final LL.B examination, which resulted in a second class upper degree at the University of Ife in 1976.  She was the brain behind a non-governmental organisation, Support Bridges Initiative (SBI). After she left public service, she got another job at IGI Plc. She was employed as Deputy Director, Corporate and Legal Services and Company Secretary, almost as soon as she retired from the public service in June 1996. And by the time she was bowing out of the company after 14 years, she left as the deputy managing director, corporate services, and company secretary.

She was born into the Olulade family. Her late father was a Reverend of the Anglican Communion; he was a Vicar in two Anglican churches both in Abeokuta and Ibadan. Her mom was a professional, a Sunday school teacher. She attended primary school, St. Stephen’s School, Ibadan, and Queens School which started in Ede and later moved to Ibadan. At the Law school, she got the Best Prize in Conveyance and Legal Drafting. When she left the Law School, she joined the Federal Ministry of Justice and started with public prosecution, civil litigation and then international law. She got married to her late husband, Prince Dr Funso Adetiba just as she left the Law School. She retired at grade level 16 in 1996 and the Lord blessed her with her first child, Opeoluwa in 1991. After 13 years then 10 years later, she had another child, Motunrayo.