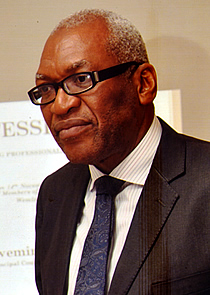 Wemimo Ogunde is a tall and handsome Lagos Lawyer who until recently was the Attorney-General and Commissioner for Justice in Ogun State. The big news is that Wemimo, who is the son of late Theatre icon, Hubert Ogunde is 60. He is a carbon copy of his late dad.

If you have not heard about him it is because he has lived a very quiet, but successful life. Apart from the few years, he was Commissioner under Gov. Amosun, he has been out of the public glare, choosing to pursue his legal practice in a very quiet manner. You will never see him brag about his rich pedigree. You will also never see him flaunt any privileges he has enjoyed. He has always been a  prim and proper legal practitioner with impressive credentials.

Born on 3rd September 1958, he is from Ososa-Ijebu in Odogbolu Local Government. His late dad is Chief Hubert Adedeji Ogunde and mum, Clementina Adesewa Ogunde. He had his primary education at Ladi-Lak Institute, Yaba, Lagos between 1964-1970. Then Secondary at Igbobi College, Yaba, Lagos where he had his WASC between 1971-1975 and his HSC between 1976-1978. He attended the University of Lagos between 1978-1982 where he studied Law. He attended Nigerian Law School between 1982-1983. He was called to the bar on 30th July 1983.

He was co-winner of FRCN National Quiz Competition in 1978, School Prize for Best Performance in 1977,  won School Prize for Best Performance in 1977 and 1978 and University Prize for Best Performance in the subject within teaching unit in 1982. As for his professional career, he was a Counsel at Gani Fawehinmi’s Chambers between 1984-1987, Partner at Abudu, Akinyemi & Ogunde between 1987-1999, then Principal Partner, Wemimo Ogunde & Co from 1999 to date. He was the Best Law Reporter for the month (Nigeria Weekly Law Report) for May and July 1987. He was Assistant Editor of Digest of Supreme Court Cases (1956-1984) between 1984-1985 and Deputy Editor of Nigeria Weekly Law Reports between 1985-1987. He was Deputy Editor of High Court of Nigeria Law reports in 1984. He was Chairman, Youth Empowerment, Committee, NBA Ikeja Branch between 2010-2011, Member, Body of Benchers between 2011-2013, Member, General Council of the Bar between 2011-2013, Member, Council of Legal Education between 2011-2013, Member, Ogun State Judicial Service Commission between 2011-2013. He was conferred with the rank of Senior Advocate of Nigeria (SAN) in August 2011.

He served with Central Bank of Nigeria between 1983-1984. He was Chairman, Prosecutors Interactive Sessions Committee EFCC between 2004-2006, External Prosecuting Counsel, EFCC from 2003-Date, Member, Presidential Committee on Police Equipment Fund between 2005-2007 and Member, National Prosecution Coordination Committee from 2016 to date.

He has an enviable public service record. He was Attorney-General and Commissioner for Justice Ogun State between July 2011-Feb, 2013:, Chairman, Ogun State Council on Prerogative of Mercy July 2011-Feb. 2013, Member, Ogun State Tenders Board between July 2011-Feb. 2013. He is a Provincial Legal Adviser, The Redeemed Christian Church of God and a Deacon, at the same church. How does he take turning 60? What are his reflections on life at 60? City People Publisher SEYE KEHINDE spoke to him last week at his Ilupeju chambers. Below are excerpts from the interview. He says it has been a long 60-year journey. “God has been good to me. All through the way, God has always sent people to help me at every turn, and at every stage of my life.” Read on.

Congratulations on turning 60. How does it make you feel?

At 60, I have had 2 months, the whole of July and the whole of August for reflections. The long and short and the summary of my feeling now is Gratitude to God for sending chosen people my way to bring me to where I am. That’s just the summary. It’s a life that has been lived with the help of people.

When you say that, does it mean at every phase you’ve always had people stepping in to help?

Yes, that is precisely what I mean. What I mean is that from my birth till today my life has been the product of people coming in at critical times to help me. So I cannot actually see it as a life of achievement because I cannot see any direct effort by me to make anything happen. It has always been the exertion of energy after I have had the opportunity. Because of that, I believe that it is a life that has been lived taking advantage of Gods help through people that he has sent to me at those critical times.

How did life start for you? Where were you born? Where did you grow up?

Before I was born, my father, who many people don’t even know was a Christian, of the Aladura sect, saw that my mother was very ill, and so the Prophetess who was heading the church that he belonged to at that time, Home Praying Band of Miracles told my father that his son was coming. There was no DNA. I believe she knew by prophesy. She said my mother must move out of the house and go and live in a rented apartment. My mother moved out of the house and I was born in a  rented room where my mother was staying just close to our house at No 4 Cemetry Street, Ebute Metta. From that time, the 1st person in my life came in. My dad’s sister, Dorcas Olusanya. She was the one who took care of me when I was young, much more than my mother did. And was always there to help me, to guide me, nurture me, to teach me, until her death in September 2012. She had 3 children. All of them died. I never saw anyone of them. So, I was her son. I was her child. I am very glad that when she died, I buried like a Queen.

That was the first. Thereafter at Primary School, at Ladilak Institute I had many encounters there. I can mention 2. The first was an experience I had with one chap who has my friend, who used to sit close to me. He was my only friend. I did something nasty to him which injured him. It was a very bad experience. I felt really bad. I was punished. What I discovered was that it was that experience that taught me compassion, the value of friendship, because when the boy came back from the hospital, he still agreed to come and sit with me. I was 7 years old when it happened in 1965. But from that time, I saw that the Lord wanted me to understand the need for one to take friendship seriously not to harm your friend, to always do good to him, to always think of him. It was an experience I had very early in life. I always call that the intervention of Jesus.

Then, in Secondary School, I had another encounter. I lost my mother when I was 12 in 1970. And so when I entered Igbobi College in January 1971 my mother was already dead. I was just 12+. At that time I had to wake up quickly to learn about the discipline of study, the discipline of punctuality in school because I was a day student, the discipline of even doing your homework. For a 12-year-old, just entering secondary school. with no experience, I found that very difficult to do. So, my grades started falling and when I finished WASC in 1975 I had 2 credits, 6Ps and 1F. That was a very poor result. I had to resit my WASC in 1976 before I could get a good result. So when I entered University I had 3 close friends. In 1978, God sent another person to me, a friend of mine again, who told me about an opportunity to teach and I started taking the private tutorial classes from 1978. It was the money I got from there, from the opportunity that this friend opened to me, that I used to pay my way through University. So, I didn’t have to depend on my father. I paid my way myself. And so the discipline that this opportunity gave me, helped me to understand how to save, how to manage money and how to plan.

In the University also I met friends who are still with me till today. One of them incidentally was the one who opened me up again to an opportunity to work in Chief Gani Fawehinmi’s Chambers. It was another one that gave me his car to use on my wedding day. So, when I got to Gani’s Chambers again in 1984, by 1985, I met one man who is late now. And he just took a liken for me. I was handling some of his cases. And when we left Gani’s Chambers we continued that relationship. I can tell you that this man who was from Kogi State, who didn’t meet my father was responsible for about 75% of my income, from 1987 to the year 2000. He was the one who introduced me to notable Nigerians, he was the one who built my practice. He was the one who opened me up to so many places and corporate clients that I had at that time. He was the one who did it. He didn’t know me. He didn’t know my father. That was how he did what he did.

So, if you look at what I have to say about my 60th birthday now, it is more about other people then about myself because I cannot count anything as an achievement when those things have actually occurred after I have been given an opportunity, by the help of some people.

READ ALSO: MY LOVE FOR makeup MADE ME GO INTO THE BUSINESS •KELVIN EZEKIEL, CEO ZIKEL COSMETICS

My Love For Make Up Made Me Go Into The Business – KELVIN EZEKIEL, CEO ZIKEL Cosmetics