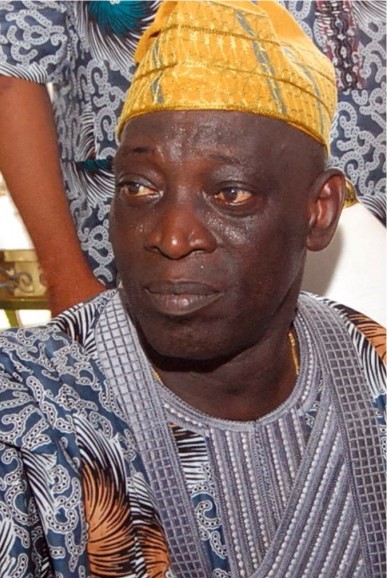 •Names Street After Her In SURULERE

•Blow-By-Blow Gists From The PARTY

The whole of Lagos was literally thrown into jubilation on Saturday, 24th of August, 2019, when one of the Lagos crown princes, Otunba Dapo Alli Balogun, who is the CEO of Saudi Eko, the biggest Lagos Island Shopping Mall, threw one of the biggest 90th birthday parties for his aged mum, Alhaja Mutiat Alli Balogun at Tafawa Balewa Square in Lagos Island. The event which was one of its kind kicked -off on Saturday 18th of August before the grand finale which had over 10,000 guests crowned it all.  City People Assistant Society Editor, ABIOLA ORISILE, was at the celebrity-studded birthday to serve you the hot gist.

The Appearance of the “Olori Ebi of the Kosoko ruling house, Alhaja Mutiat Alli Balogun, at her 90th birthday, made her look 60.  She looked healthy and agile. She was first spotted in an ash colour luxury lace matched with a timeless white diamond, which sat pretty on her neck. She danced into the well-decorated hall with her children and grandchildren amidst pomp. Many who know Mama revealed to this magazine that it is not news to them that Mama recognised everybody’s names. One of her granddaughters, Sekinat Alli-Balogun, also revealed that Mama was the one who went to  Mile 12, and Oyingbo to buy all the ingredients used to prepare “Ileya” food. She also explained that Mama still cooks her food herself and prepares what over 10 of her grandchildren would eat when they come around. City People magazine spoke with the 90-year-old birthday girl and she revealed that she herself bought over 10 baskets of fresh tomatoes and other things when they had the last Eid Fitri Kabir party. She said she still goes to the Market herself and derives pleasure in doing her cooking herself.  Mama took many by surprise when she danced out at few minutes past 2 pm to storm King Wasiu Ayinde Marshal’s stage. She danced without a walking stick and beamed with smiles throughout the event.

If there is any mother who feels fulfilled on her birthday, it was the 90year old host, Alhaja Mutiat Alli Balogun. She couldn’t contain her joy as her children surrounded her table at her birthday. They were led by her sons, Otunba Dapo, Babaloke and Abioye Alli Balogun, while her pretty daughters were also not left out.  Mama’s daughter took after her in the fabric business. Mama is one of the foremost Lagos fabric merchants. Many of them also came with their large number of guests to witness the historical event.

OBA OF LAGOS SENDS HIS 4 OLOORIS

Though Olowo-Eko, Oba Rilwan Akiolu, couldn’t make the event, he sent his 4 beautiful Olooris who spent many hours at the grand reception. They were led by Oloori Agba, Oloori Kudirat and Oloori Fadekemi.

WHY THE ALLI BALOGUN FAMILY IS POPULAR

One of the popular Lagos families, who are not just popular, but influential is the Alli- Balogun family. The family produced the late Balogun of Lagos, who is Otunba Dapo Alli Balogun’s father. He was so rich and influential that a popular street on Lagos Island was named after him. He was a businessman of note and a prominent Lagos socialite. There is no Lagos rich man who doesn’t know him and his name opened many doors. Just like his late father, Otunba Dapo Alli Balogun too is rich and influential. He owns the popular Saudi Eko market on Nnamdi Azikwe, which has over 300 shops.

A few minutes past 1 pm, the deputy speaker of Lagos State, Hon Wasiu Eshilokun made his grand entry. He was clad in the Ankara Aso-Ebi picked for general guests and took his seat beside Lagos top politician, Senator Musiliu Obanikoro and his wife, Mrs. Morufuat Obanikoro. They were seated at the same high table with Oba Gbobisabe and his wife, Oloori Ramota and Baale Eletu-Edibo. They chatted freely before they left a few minutes past 5 pm.

Who else could’ve planned the event of this magnitude other than Mrs. Biola Awosika, the CEO of Beevents and Oasis boss. They were both on their toes for several hours while the event lasted. Speaking with both event planners, they revealed that it took them over 6months to plan the 10-thousand guests event.

Alhaja Idiat Alli Balogun is the oldest daughter-in-law of the entire Alli-Balogun wives. She is the pretty wife of Otunba Dapo Alli Balogun and she is also one of the closest wives to Alhaja Mutiat Alli Balogun. She was up and doing at Mama’s birthday, seeing that the event went as planned. Her younger sister, Mrs Bimbo Pitan, who is one of the brains behind the Lagos Island shoe brand was also the one who served as Mama’s P.A for the day. She made sure Mama got all the necessary attention she needed whenever the need arose.

BALOGUN ADESOYE AND WIFE, OTUNBA FOLASADE ARE BACK

Lagos Diamond merchant, Otunba Folasade Risikiyat Adunni Adesoye, the CEO of Jewellery Affairs and her husband, Otunba Balogun Adesoye, have been away for the 2019 Hadjj They were among the celebrity couples, who went to the holy land with NADWAT missioners’, Amiru Ajala. They came in a day before the event and still made it a point of duty to honour the Alli-Baloguns. Don’t forget that Otunba Risikiya Adunni is the younger sister of Alhaja Bukola Alli Balogun. They spent several hours at the event before they left.

There was no doubt that Otunba Dapo Alli Balogun is well-loved by his tenants for his fatherly role. That was why over 3,000 guests bought the fabrics at Saudi Eko and its environs. Otunba Dapo Alli Balogun, who loves to do his things differently, made sure he got separate food vendors for them. He also made sure they were never left out of all the side attractions. Don’t forget that his elder sisters are also major players inside Saudi Eko market.

CERLEBRATOR GETS A LIFETIME GIFT FROM HER CHILDREN

Alhaja Mutiat Alli Balogun’s name has been written in Gold by her children. This is not just because they were able to pull the high and mighty to their Mum’s birthday in Lagos, but because they were able to do things differently. Not only did Otunba Dapo Alli Balogun get a street named after his mum, he also made sure they got one of the latest series of Mercedes Benz for his Mum. Mama couldn’t hold back her tears as she kept saying, “Eyin le ma gbeyin mi”(You will all witness my death).

DO YOU KNOW  JIDE KOSOKO & DAPO ALLI BALOGUNJ ARE RELATED?

Abuja construction giant boss Otunba Lekan Osifeso, and his beautiful wife, Erelu Tola Osifeso, made the event. They enjoyed the party with the Osifeso sisters, Folake and her younger sisters. They love their brother’s wife so much and they had a great time at the party.

History also repeated itself at the 90th birthday of Otunba Dapo Alli Balogun’s mum. Did you just ask how? Well, when Otunba Dapo Alli Balogun’s mum, Alhja Mutiat turned 80 about 10 years ago. It was held at TBS in Lagos. When she turned 90 last weekend, it was also held at TBS Lagos. When Mama turned 80, it was K1 who performed and her 90th birthday also had the fuji living legend, K1 on the bandstand.

READ ALSO: MY VIEW ABOUT THE SUPPOSED CRISIS IN OSOSA