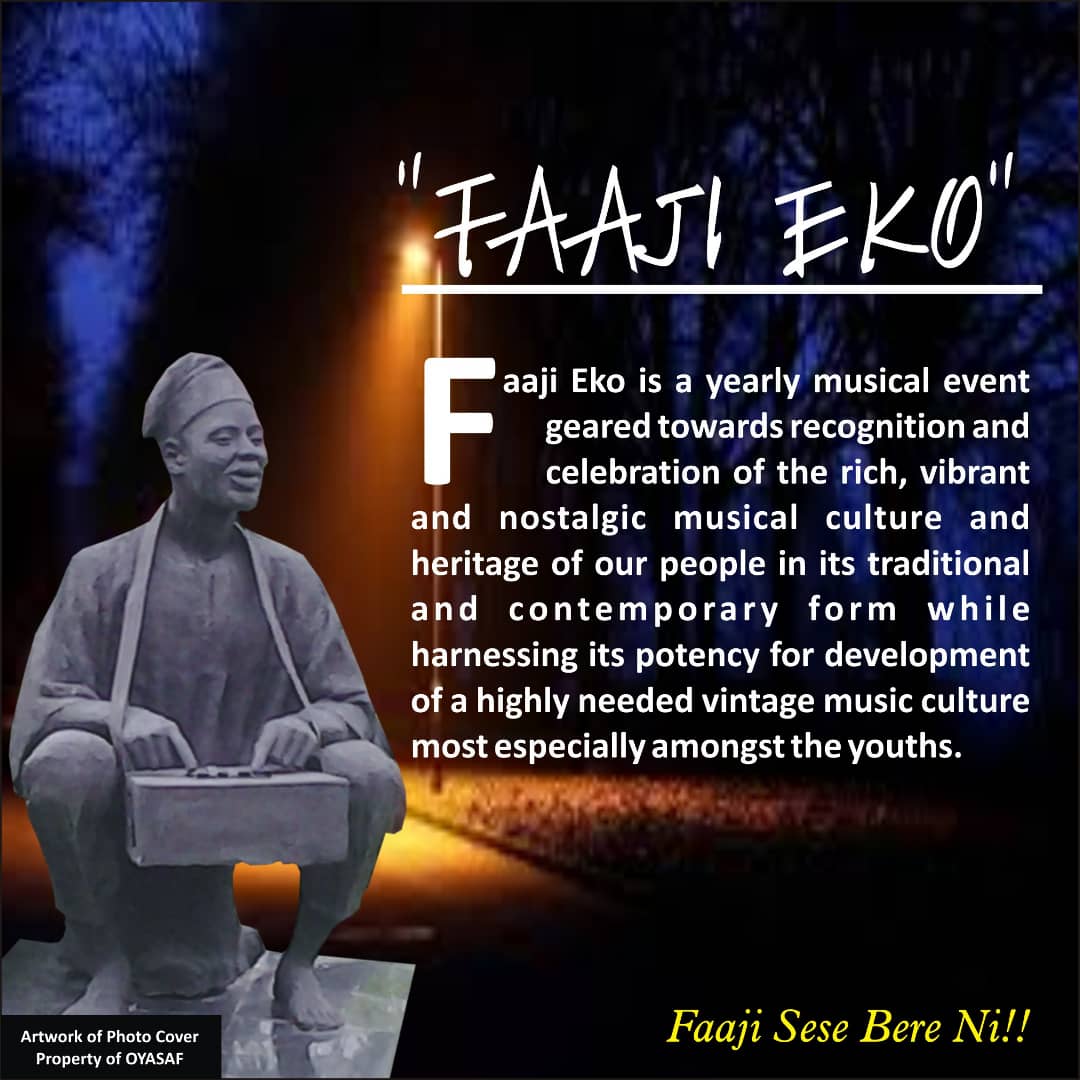 Lagos is a “State of ddeep-rootedhistory, colorful traditions and immense resilience”. The traditional pride and dignity characteristics of Lagosians is in its Musical Mood which daily expresses its residents as naturally industrious people; full of pride and self confidence.

Lagos City has over the years become a place for different beehive of activities and overtime taken up its own identity as an accommodatingly fluid, dynamic and enduring place of abode.

Music in Lagos has been in existence since the days of the British Colonialist era. Many musicians in the early 20’s plyed the streets of Lagos ie Kakawa, Ita Faaji, Bamgbose, Campos Square either as itinerant or full time musicians entertaining Lagosians at different social gatherings.

Peculiar among such musicians was J.O Araba who serenaded Lagosians in the early 1930’s with juju music together with his wife who played the tambourine.

Evergreen Musical Company Ltd, Africa’s largest collector of music of yesteryears has in past twenty years created a systematically approach for preservation and documentation of works of most of these musicians. The company has organized different landmark events to celebrate these musicians. In 2007 they had a posthumous celebration for the Afrobeat Legend Fela Anikulapo where all his musical works was publicly launched .In the year 2010 the company gave awards to over 45 Nigerian and Ghanaian musicians both dead and alive during Nigeria’s 50 years Independence. The company also celebrated 60 years on stage of a Highlife living legend Dr Victor Abimbola Olaiya, OON in 2012. In 2016 they had a groundbreaking event in celebration of a Juju Highlife King Dele Ojo. Perhaps it would have become a national tragedy for us to be labelled as people without no music history if not for a company like Evergreen Musical company that have stood solidly behind the promotion and preservation of our indigenous music.

In a special tribute dedicated to Mr Femi Esho , Chairman of Evergreen Musical Company, by Yinka Davies one of Nigeria’s finest female Jazz music icon she wrote“ Here is the greatest of minds, the convener of our heritage, and the custodian of an era still relevant in our days and beyond… Thank you for not letting us go or be laid to waste dearest daddy Femi Esho.

As part of plans to continuously safeguard Nigeria’s musical heritage Lagos State Government and Evergreen Musical Company Ltd has agreed to a joint partnership of an event tagged Faaji Eko which is a yearly musical event geared towards recognition and celebration of the rich, vibrant and nostalgic musical history of Lagos people in its traditional and contemporary form while harnessing its potency for development of a highly needed vintage music culture most especially amongst the youths.

This year the event which has been included in Lagos State Calendar of events is set for June. Part of the lined up of activities is a documentary that will showcase the life of different Nigerian Music Icons, Symposiums and workshop programs on Nigerian Music, nostalgic performances of many of Nigerian forgotten musicians with a rehash of their songs performed by the new generation musicians. The event climax according to the organizers of this concert will be a nostalgic experience segment where the governor of Lagos State His Excellency Governor Akinwunmi Ambode will present an award to an Iconic Music figure in Nigeria who has an outstanding track record of immense contribution to Nigeria’s musical heritage.

It is the strong believe of the organizers of this event that concerts like this will no doubt pave way for the evolution of indigenous musical styles that are original to our tradition.