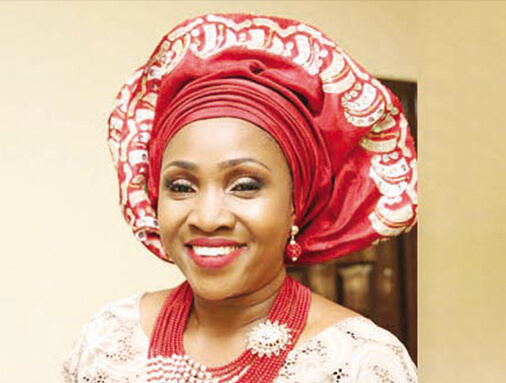 She is a trained Pharmacist. And a proud one at that. That has always been her age-long dream. This pretty woman is also a Politician. And a popular one at that in Lagos State. A few years ago, Pharm (Mrs.) Uzamat Folashayo Akinbile-Yussuf became Commissioner for Youth & Social Development in Lagos State. She ventured into politics to see how she could contribute to make the lives of people in her neighbourhood at the Agbado/Oke-Odo Area of Lagos much better.

She is currently the Commissioner in charge of the Ministry of Youth & Social Development in Lagos State.

Alhaja Uzamat Folashayo Akinbile Yussuf is a woman of exceptional leadership quality and an exemplary philanthropist. She is a magnificent model of magnetic femininity and rare blend of enviable brilliance, elegance, temperance, excellence, diligence and remarkable beauty. This honourable professional is also a woman of dignity, humility, tenacity, nobility and royalty. And she carries herself well.

In spite of her royal and noble lineage, this kind-hearted Princess and successful Pharmacist is still very conscious of the need to better the lives of the underprivileged in the society. Contrary to the selfish motive for going into politics by most Nigerian politicians, this great grassroots mobiliser and benefactor has decided to go into politics to become an exemplary political catalyst, aiming to effect a possiive massive societal change.

It is, therefore, not surprising that she has positively transformed the lives of many people, especially the youth through her practical empowerment and training initiative tagged: “The Goodwill Project”. It is a verifiable fact that through the project, many formerly jobless youths at the Agbado/Oke-Odo Area of Lagos have become intellectually, materially and financially empowered to either get jobs or start their own businesses.

What’s more, this visionary woman has equally made great impacts on the execution of various  developmental projects such as road-grading, rehabilitation of public pipe-borne-water facilities, construction of culverts, etc., at the Agbado/Oke-Odo Area of Lagos.

In short, she has demonstrated enviable leadership and political responsibility in her official capacity as the Supervisory Councillor for Agricultural, Rural, Social, Youth and Sport Development in Agbado/Oke-Odo by empowering CDAs, Sportsmen/Women.

All these political and leadership responsibilities, accountability and success are expected, given that her charity actually began at home. She has been the Managing Director and Chief Executive Officer of many successful companies such as Musaroq Nigeria Limited; Beta Silver Crown Ltd; Musaroq Pharmaceutical, etc before she went into public office.

Born more than four decades ago to the late Pa Jubril Oriola Kadiri and the late Madam Sidiquat Oyinlola Kadiri of the renewed family of Iboriaran Omo Oba Moyegeso of Ijebu-Ode, she had her primary education at Ansar-Ud-Deen Primary School, Ile-Ife, Osun State between 1980 and 1986. She later proceeded to Seventh Day Adventist Grammar School, also at Ile-Ife for her post-primary education between 1987 and 1992. She was admitted to the premier University of Ibadan, Oyo State for her first degree. Afterwards, she proceeded to the University of Lagos for her B. Pharmacy graduating in the year 2006.

In recognition of her exemplary leadership and sense of service and selflessness, this great woman of many accomplishments has bagged awards such as Agbado Oke-Odo Man-of-the-Year 2013 by Mega Trend; Best Performing Supervisor in Lagos State; Recognition Award by Ahmadiya Youth of Nigeria, etc.

As if that was not enough, she was in recent time conferred with honorary award of Doctor of Social Works by the Nigerian Association of Social Workers (NASOW) for her indelible roles on social field in Lagos State.

The woman Commissioner was the initiator of first ever Leadership Youth Camp in Lagos State, which was held across 5 divisions of the State. The two-week long camp which was tagged: Ibile Youth Academy (IYA) produced 5 Youth ambassadors in all the divisions and one of them emerged overall winner who would be representing the state in all youth programmes within and outside the State.

In acquiring more experiences and knowledge in her calling, she had attended many youth and social work seminars, symposia, workshops and conferences organised in the state and outside the shore of the country included India, Canada, Belgium to mention but a few.

Pharm. Uzamat is a successful business woman, who started early in life in Ile-Ife under the tutelage of her mother to eventually own a conglomerate consisting of Musaroq Nig. Ltd, Beta Silver Crown Ltd, Musaroq Pharmaceuticals, just to mention a few.

Her selfless nature and vision for genuine empowerment drew her into partisan politics with the determination to render selfless services.

In politics as in the flourishing business she left behind to contribute for public good she quickly made remarkable impact as an active member of the All Progressives Congress APC from inception till date. She has been a Supervisory Councilor, Agriculture, Rural and Social Development in Agbado/Oke-Odo between 2012-2014 she took advantage of her position to benefit different CDAs, Sportsmen and Women.

At different times she also empowered young people through free Computer acquisition programmes, sponsorship of Catering Management programmes, distribution of free expanded umbrella to market business men and women and empowering a host of other indigent people through her Goodwill project by giving out computers, printing machines, grinding machines and varying sums of cash donation to start businesses.

A strong believer in the saying: “think more of what you can do for your country, than what your country can do for you,” she at different times embarked on self-help projects in her domain to alleviate the sufferings of members of her community such as Construction of Culvert Omroga/Akintan power line. Sand filling of Pothole along Command Abule Egbe Road. Rehabilitation of Public Water Project situated at Ifelodun Street, Oke Ado under Temidire CDA Agbado Oke-Ado LCDA.

Princess, as the former aspirant to Lagos State House of Assembly, Alimosho Constituency 1 2010-2011 is fondly called, acknowledges the fact that every blessing is bestowed by Allah and that the essence of politics and governance is to render selfless service to the people. A principle she says will guide her through as the Honourable Commissioner Ministry of Youth and Social Development.  In October 2015, she was called upon by Governor Ambode to hold the portfolio of the Hon. Commissioner, Youth & Social Development. She is married with children.