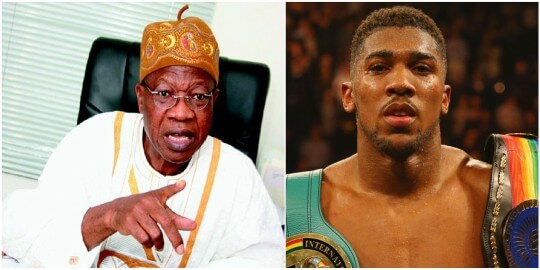 Information minister Lai Mohammed has congratulated the Nigerian born boxer on his victory against popular boxer, Klitschko . The minister who quoted Joshua who is proud of his Nigerian heritage, said;

”My heart is in Nigeria, My heart is in Britain. I am a Nigerian man by blood, yes,” the Minister quoted Joshua as saying in a recent interview, during which he also listed the secret of his success as pounded yam, eba and egusi – all Nigerian cuisine.

The Minister, who drew serious flak for his jollof rice goof recently, further hailed Joshua for his humility and undying spirit by coming off the canvas, after he was knocked down by Klitschko in the sixth round to win by a Technical Knock Out in the 11th round of the rip-roaring fight.

The Ogun State-born pugilist stunned the world on Saturday when he defeated Ukranian Wladimir Klitschko to become the unified Heavyweight Champion in front of a record 90,000 spectators at London’s Wembley Stadium