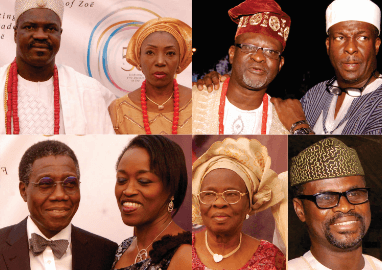 •Hosts 3-In-1 Birthday Dinner In LAGOS

Last week, the families of Braithwaite and Branco Rhodes gathered to celebrate the beautiful life of their daughter and daughter in law, Laolu Branco Rhodes who hit the big 50 few days ago. The golden girl staged a classy superlative 3 in 1 birthday for herself, alongside her husband who threw his weight behind her. The birthday dinner took place at Yard 158 event centre in ikeja on Sunday, 26th December, 2017. City People Society Editor, TAYO FAJORIN OYEDIIJI attended.

THE GOLDEN GIRL, LAOLU AT 50

Laolu Branco Rhodes surely had a filled day as she made herself happy all through. She had a lovely time around her children, husband and families at her party. She looked very beautiful for the night and opted for an all studded white aso oke matched with a coral bead. She glowed in a black dress for her dinner party. Laolu is married to Kitoye Branco Rhodes and together they have 6 children. She is the CEO of Yard 158 Event Centre and other thriving businesses in Lagos. She is one of the pretty daughters of late sage, Dr. Tunji Braithwaite. Both husband and wife come from a very wealthy family, no wonder, why her party was a testament to that. She attended ivy league schools and has an intimidating qualification.Her marriage to Kitoye produced 6 children, Dami, Dara, Fetikemi, TC,Ifeoluwa and Olatunji.

The husband of pretty Laolu is Kitoye Branco-Rhodes. He was the perfect host for the day making sure his wife, children and all invited guests were all catered for and well attended to. He was seen at the party putting one or two things together before the arrival of his wife and guests. Kitoye Branco Rhodes is from the popular and wealthy Rhodes family. Kitoye Branco-Rhodes is a Nigerian, businessman, energy expert and economist. He is currently a member of the opposition party, People’s Democratic Party (PDP) and contested the gubernatorial elections in Lagos State in 1997 and 2003. His father is late Chief Olayinka Rhodes, the Baamofin of Lagos and Baagbimo of Ile-Ife and Chief (Mrs) Elizabeth Abimbola Rhodes (Nee DaSilva, one time Iyalode of Lagos.

THERE WAS A SHORT THANKSGIVING SERVICE

The 50th birthday party started with thanksgiving service themed “50 and Thankful’. It held at a section of the hall and was attended by family and friends of the celebrant. The service started at exactly 5.30pm, the stipulated time with praise and worship and there was first and second bible reading followed with a rendition of Amazing Grace hymn. The service was presided over by Celebration international church led by Pastor Emmanuel Ireh.

Popular saxophonist, Funmi Ajayi also known as Funmi Sax with her crew was at the event to perform and she did so very well with her selected choice of gospel music and guests gave her a standing ovation for it. She has been a regular face of many A-list parties and she is doing well at it. After her beautiful rendition, she also ushered guests to the cocktail section and entertained them before having dinner.

The celebrants mother, and widow of Chief Tunji Braithwaite, Madam Grace Braithwaite, (nee Falade ) was at the party to support her daughter. She was even one of the first callers at the thanksgiving service. She was spotted wearing a wine colour sequined lace matched with gold headgear.

The brand new Olugbon of Orile Igbon in Ogbomoso, Oyo State, Oba Francis Alao was at the birthday party. He was not there alone. He came with his beautiful OlOori, Sola Adeoti now Sola Alao. The Oba and his wife walked into the thanksgiving service at about 6pm and waited all through the evening for other programmes. Lets quickly tell you that the new Kabiyesi’s Olori is the first daughter of Doyin Group of companies’ chairman, Chief Samuel Adedoyin. She was the CEO of the defunct City Express Bank where she holds sway and a pastor in the Redeemed Church of God.

ABOUT THE TWO D’S THAT ANCHORED THE DINNER PARTY

The two people that anchored the dinner session of the birthday was one of the good friends of Kitoye Branco Rhodes, one is Dola Bamgboye, a topshot at MTN. He was at the thanksgiving service and coordinated part of the evening session with another fellow that names start with D, David who also worked alongside, Dola.

Midway into the dinner party, one of Lagos Big Boy, Muka Amusan who is a younger brother to Shoprite owner, Tayo Amusan stormed the venue and made his way straight to where Kitoye was sitting. We gathered they have been friends for a long time. He wore a light blue native outfit.

AT THE BIRTHDAY DINNER

The birthday dinner was decorated beautifully well in a garden inside the Yard 158 arena. It was in colours of black and gold with the celebrant’s corner mounted like a stage and decorated in white colors. Guests were treated to sumptuous meal and exotic drinks while Demola Olota serenaded guests with lovely music and happy birthday songs for the celebrant. The party train later moved into the hall where it was wrapped up with a disco party. It was fun all the way as the DJ supplied both old and new school music and kept everyone dancing for hours.