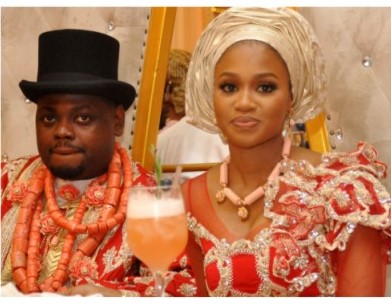 It was a day of glitz and glamour on Saturday, the 30th of March 2019, at the Civic Centre, in Lagos when Seleake Tari Alamieyeseigha and Ameerah Funmilayo Abraham, got married in Lagos. The party was a 3-in-1 party. It started with an engagement, followed by wedding solemnization and classy reception afterwards. The groom, Tari, is the son of ex-Governor of Bayelsa State, late Dipreye Alamieyeseigha and Margaret Alamieyeseigha while the bride, Ameerah is the beautiful daughter of Late Mr Kayode Alaba Abraham from Ita Faji Lagos and Mrs Aisha Abraham from Adamawa state. The event which started with an opening prayer was conducted by popular Lagos engagement anchor, after which the groom’s family were ushered into the hall and gladly received by the bride’s family.

Thereafter, a minute silence was observed in honour of the couple’s fathers. There were exchanges of letters and the couple also performed their traditional rites where prayers were offered on them. The short church service and reception opening prayer was by Pastor Caleb Lazarus while Pastor Williams Duru, the Senior Pastor of Later Glory Assembly officiated the wedding solemnisation. The main feature of the church service was praise and worship while the exchange of marital vows and rings followed next. The colourful reception had in attendance important personalities from Lagos and Bayelsa. It was also a wedding where the rich culture of Bayelsa was brought into play. Even the men did not disappoint in their mode of dressing, as they exhibit the true culture of the South-South. The father of the day was the foremost billionaire, Captain Hosa Okunbor, who played a fatherly role at the wedding; he gave the couple tips on how to keep a successful marriage. The mother of the day is the Permanent Secretary of the Ministry of Defence, Mrs Nuratu Batagarawa, who was also saddled with the responsibility of supervising the cake cutting. The Chairman of the occasion, former Permanent Secretary, Ministry of Power, Amb Godknows Igali, who declared the event opened also gave tips on how the couple should make their marriage a success. There was a powerful delegation from Bayelsa State, led by the SSG, Hon. Kemela Okara in reference to the fact that the groom’s father, late Bayelsa Governor, Alamieyeseigha is still relevant after his death. The SSG was at the party to represent Bayelsa Governor, Seriake Dickson. The event had in attendance many of the Bayelsa top shots in government. There were many House of Assembly members who graced the event and also society women from Bayelsa and Lagos. The celebrity women shone like a star in their 60k package Aso-Ebi, which is a mixed colour of onion, pink and mint green headgear.

Over 80 per cent of the women wore the Aso Ebi and they all came to support the couple’s mothers. The reception compere was by foremost Sports Journalist, Aisha Falode, who delivered well and looked good in her complete Aso Ebi regalia. Some of the bride’s mum friends at the wedding were Lagos celebrity women, Nana Yakubu, Genny, Adeosun, Shola Awwal, Debola Okusanya who rocked the Aso-Ebi and many others. Those who sat with the groom’s mother on the VVIP table were Hajia Bola Shagaya, who opted for a black background and multicoloured designs on it. She was very happy for the former first lady and was seen dancing and ushering her into the reception venue. At the party was also Mrs Olayinka Mutiat Ladoja, the ex-first lady of Oyo State who was one of the special guests of the groom’s mother, Mrs Margaret Alamieyeseigha. Many Bayelsa celeb women who trooped in all the way from Bayelsa and those in Lagos stood out in the Aso Ebi. Even their styles were out of this world. The couple’s mothers were first on the lists as both changed twice for the event. The bride’s mum wore a beautiful coral outfit for the engagement and later changed to a yellow George. The groom’s mum also shown her stylish nature when she opted for a double wrapper pink George outfit for the engagement ceremony and changed to a beautiful gold hand-cut George lace for the reception party. They both matched their outfits up with diamond jewellery. Some of the Bayelsa celebs who stormed the party were many in numbers and leading the park is honourable commissioner for women affairs who represented Bayelsa state First Lady, Hon Martha Jenakumo, Pelebo Banigo, the pretty wife of a former minister of science and King, Ebitimi Banigo, the paramount ruler of Okpoama Kingdom in Bayelsa.