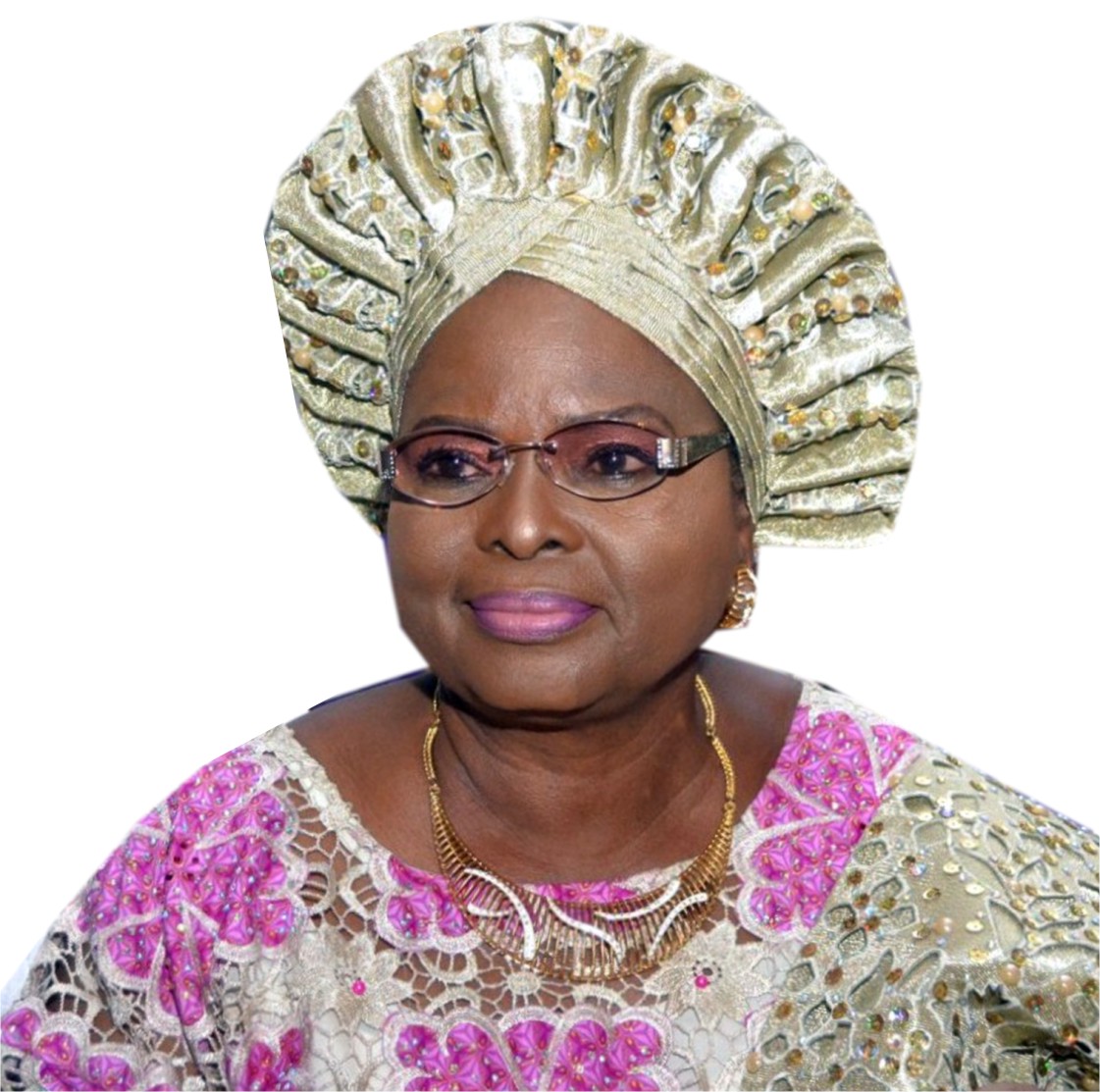 Saturday 26th of May, 2019 was a special day in the lives of the Fawehinmis as the Matriarch of the family, Mrs. Ganiat Bukola Fawehinmi, wife of the late Human rights Activist and popular Lawyer, Gani Fawehinmi (SAN, GCON) celebrated her 70th birthday in grand style. The landmark celebration started with a Thanksgiving Service at the Arch Bishop Vining Memorial Church Cathedral, Ikeja. The gorgeous looking birthday girl who looked way younger than 70 was accompanied by all her children, family and well-wishers of the Fawehinmis. Immediately after the Church service was over, the party proper was moved to the Regency Hall and Events on Otunba Jobi Fele Way, Ikeja. And it was indeed a beautiful gathering of select distinguished personalities who had all come out to honour an enigma, a resilient woman and an amazing wife to the late legal juggernaut, Gani Fawehinmi. City People’s Senior Editor, WALE LAWAL and photojournalist, IDOWU MATTHEW were at the event to serve you a detailed account of all that went down on the day.

Mama’s special day started at the prestigious Arch Bishop Vining Memorial Church Cathedral where she worships regularly. She is one of the respected elders in the church and is also loved by many of the members. When she was called out for her thanksgiving by the officiating minister, The Venerable Festus Olowosile, who prayed intensely for her, all of her children, members of the family and friends who had come to celebrate with her all filed out and joined her at the altar. She danced joyfully to the soul-lifting ministration of the church’s choir.

The Regency Events and Hall located on Otunba Jobi Fele Way, Ikeja, was the venue of the birthday party proper. At exactly 3 pm, the celebrant stepped into the already filled hall. She looked young and elegant in her pink and green coloured lace fabric sewn into Iro and Buba which sat pretty well on her. A guard of honour was made for her with members of the family lining up on each side of the entrance as she danced into the beautifully decorated hall flanked on either side by the guard of honour. It was a truly befitting entry for a woman who has given so much for her husband, her family and for everyone directly or remotely connected to the cause for which her husband lived and died for.

Popular Human Rights Activist and renowned lawyer in the Gani Fawehinmi Chambers, Barr. Ebun-Olu Adegboruwa turned pastor when he offered an excellent opening prayer at the event. When he was called upon for prayers, everyone was surprised to hear him pray like an ordained pastor seasoned in the art of praying before large congregations such as the Regency Hall filled with guests who had come to the party and celebrate with the beautiful looking Mrs. Ganiat Fawehinmi.

The chairman of the ceremony, Chief Mike Ade Ojo, Chairman and CEO of Elizade Motors, was given the responsibility of giving the opening speech. Expectedly, he eulogized the celebrant, Mrs. Ganiat Fawehinmi, praising her for her steadfastness and devotion to her late husband, lawyer and Human rights Activist, Chief Gani Fawehinmi, (SAN, GCON). He also used the opportunity to call on the Yoruba race to wake up and strive to protect their integrity and livelihood in the face of mounting oppression from northern elements.

A MINUTE SILENCE FOR THE CELEBRANT’S HUBBY, GANI FAWEHINMI

The MC of the occasion, Mr. Lanre Arogundade, an accomplished journalist and Director, International Press Centre, who, by the way, did a remarkable job directing and coordinating proceedings at the event, requested for a minute silence in honour of the celebrant’s late husband, the iconic and legendary Lawyer and activist, Gani Fawehinmi. There was pin drop silence as everyone rose to their feet muttering silent prayers in honour of a man who lived his entire life fighting for the masses and battling to abolish poverty from the Nigerian landscape.

PRESENTATION OF GIFTS TO CELEBRANT

The Gani Fawehinmi Alumni Association surprised Mama on her birthday when a handful of its Executive members filed out to present to her a Cheque of an undisclosed figure. The Gani Fawehinmi Board of Scholarship for Indigent Students also presented a gift to Mama.

The young and dashing chairman of the National Conscience Party and the party’s presidential candidate at the recent presidential elections, Dr. Yunusa Salisu Tanko, stepped out to make a short speech. He paid glowing tribute to Mama, regaling everyone of how much love she showed him as a protégé of her late husband. He reminded her of the day she called him up to wish him a happy Valentine’s day and thanked her for taking good care of him back then like he were her biological son.

JOE OKEI-ODUMAKIN THANKS MAMA FOR HER COURAGE AND LOVE

Human rights activist and President of Women Arise, Dr. Joe Okei-Odumakin, who also happens to be a close friend of the Gani Fawehinmi family, was at the event to honour the Matriarch of the family, Ganiat Bukola Fawehinmi. She recounted a bit of those dark days which saw Gani getting thrown in and out of jail and how steadfast Ganiat was during those very difficult days. She also narrated how Mama would cook for them delicious meals, especially her Jollof rice, whenever she (Joe Odumakin) just got out of detention, which they all looked forward to whenever they were with the Fawehinmis. She profoundly thanked her for her motherly love.

ROYAL SPEECH FROM ROYAL FATHER OF THE DAY

High Chief (Sir) Simeon Oguntimehin, the Lisa and Prime Minister of Ondo Kingdom was at the event to represent His Royal Highness, Oba Dr. Victor Kiladejo, the Osemawe of the Ondo Kingdom, who was unavoidably absent. And he did a fantastic job. He had just the right presence to ably represent the Osemawe. When he stepped out to make his speech, he began by explaining why the Osemawe was unavoidably absent but insisted only a high chief of the status of the Lisa, his Lieutenant and Prime Minister, was suitable enough to represent him at such epoch-making event such as the 70th birthday of Ganiat Fawehinmi, widow of the late legal powerhouse and activist, Chief Gani Fawehinmi.

Without a doubt, the high point of the celebration was the moment when her son, the scion of the Fawehinmi family, Barrister Mohammed Fawehinmi eulogised his mother by paying very touching tribute to her. He started by saying that he is alive today only because of his mother and the grace of God. He saluted her courage, commitment and steadfastness during those turbulent days when the military regimes kept throwing her late husband in and out of jail. He said his mother showed the sort of exemplary love to his father that only a few have ever seen or experienced. He then admitted that though he has never been a very religious person, just like his father was barely one, but was prepared to shock many by offering to pray for his mother. And it was indeed a soul-stirring moment. Mo, as he is fondly called, prayed for his dear mum from the depth of his heart. His entire bulky frame trembled in his chair as he showered encomiums on his mum and prayed ceaselessly for her. Everyone was in awe. And by the time he was done, there was deafening silence in the hall, which was later followed by a resounding round of applause.

One of the symbolic moments of the birthday celebration was the cutting of the cake, supervised by Chief Michael Ade Ojo, the CEO of Elizade Motors. The fabulous looking seven steps cake was designed by Bakers World. Chief Mike Ade Ojo counted from 10 to 70 at which point the celebrant gently cut her birthday cake amidst cheers and applause from everyone.

Led by the band’s lead vocalist, Michael, the GateWay band did a fantastic job supplying all genre of music and keeping the tempo going. Shortly after one of the celebrant’s daughters, Simbi Osho gave the Toast, the band was called to play non-stop as guests came out to dance with the celebrant and honour her with crisp naira notes.