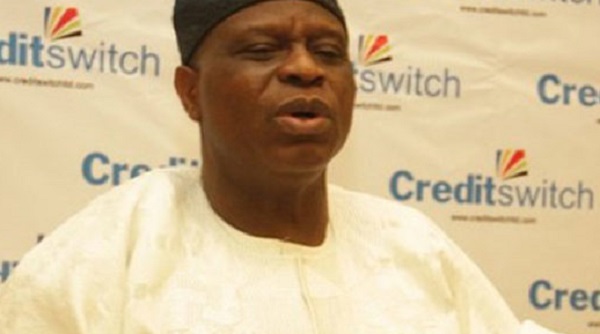 Before his untimely death, fa ew days ago, Chief Ope Bademosi was a friend of City People. At every event ,while alive he was usually full of praises for City People reporters and photographers. As a socialite, he was a regular face at major parties.

But last week, Lagos society was thrown into deep mourning when his domestic staff a Togolese, stabbed the Ondo High Chief who is the  CEO of Credit Switch Technology Limited, to death.

Many are still in shock as to what could have prompted his Togolese Cook he hired the previous week to snuff life out of him. The Cook, it was gathered, was brought by the chief from his home town, Ondo.

Chief Ope Bademosi’s neighbours, at Ikoyi Lane, Parkview Estate, Lagos, got an inkling of the unfortunate incident as a shout for help came from his house when his wife, on her return from the  bank, discovered that her husband had been murdered by their cook, who has been arrested as at the time of going to the Press. The Police launched a search for the suspect after he disappeared. He was found the next day in Ondo, where the late Chief recruited him from Chief Ope Bademosi, an Ondo High Chief, was Chairman of Ondo Development Committee (ODC) and the Lotin of Ondo Kingdom. He was also a former Chairman, Board of Directors of Wema Bank Plc. He was aged 67.

Apart from his notable track record in the corporate world, Chief Ope Bademosi would surely be missed on the social scene. He was reputed as one of the most stylish and power dressers in the country. Not only that, his connection cuts across many sectors. His role in the Oil & Gas, Manufacturing and Banking won’t be forgotten in many years to come. His partnership with his childhood friend, Mr. Seye Oladapo, gave birth to Stanmark Holdings Limited, a parent organisation that oversees interests in banking, oil services, commodity trading and manufacturing.

As a result of its giant stride, Stanmark Cocoa Processing Company, a collaborative manufacturing effort between Stanmark Holdings and Cadbury Nigeria Plc, was sited in Ondo town on the advice and insistence of Chief Ope Bademosi.

In the banking sector, Stanmark Holdings Limited together with some other corporate entities such as Odua Investment Group became core investors and bought over the ailing National Bank of Nigeria whose fortune was reversed along the path of profitability before its acquisition by WEMA Bank during the recapitalisation exercise.

After the acquisition of National Bank Limited by Wema Bank, Chief Bademosi  became a non-executive Director of Wema Bank Plc, the position he maintained  for four years.

Following a reorganisation in Stanmark Holdings Limited after which divestments from some business were necessary, Chief Ope Bademosi and some partners founded the Amalgamated Mining and Exploration Company Limited, which he was the Chairman until his death last week. He also served in that same capacity in Creditswitch Limited – a telecommunication support company.

He was also a board member of other companies like Alliance & General Insurance and Zokahm Nigeria Ltd – a Syrian managed construction company based in Nigeria.

Born on 1st of May, 1951 to the late prominent educationist, Mr. B.A Bademosi and Madam Abigail Bademosi (nee Adeloye), he attended Bishop Philips Memorial School for his primary education in 1962. He went to St. Joseph’s College, Ondo State for his secondary education in 1964. He thereafter proceeded to the prestigious University of Lagos, where he studied Biological Science in 1977.

In his last interview with City People Magazine, he spoke about his life. Below are excerpts.

Why have you been consistently staying on the social radar. What explains this?

“All glory to God for making me relevant in my career and in the society, I mean that is enough to thank God for. But making waves on the social scene  is just one of those things that keep me going. I enjoy the company of people I keep and I have always loved to be among my people, I want to socialise and it gives me kicks.

Seeing my friends, seeing people around me makes me happy. I don’t want to be lonely any time of my life. I don’t drink alcohol, but I like dancing, I like to party most of the time. Social scene gives me some kicks, which I enjoy so much and I pray to God to give me enablement to attend social functions because that is where I derive fun.” I can say that socialising gingers me the more at this stage of my life”.

At what point in his life did he cut this image of being a mega socialite or was there something in his background that brought out the trait in him?. Were his parent’s socialites too?.

“No, my parents were teachers, so I am from a very strict background. It just happened that when I went to UNILAG and… I think I enjoyed my days in the university. I had good parties, weekends I’m all over the place enjoying myself. So, that helped me a bit. Maybe it’s just God’s in-built talent in me.

So, is he the type of father who is strict with his children too?.

“Not at all, I allow them to do what they want. I don’t…I guide them to make sure they are doing the right thing, but I’m not a strict father.  They are adults, but when they are going off the course, I advise them.”

What is the difference between Chief Ope Bademosi the socialite and the a private man?.

I think it’s the same thing. This is me, I don’t pretend not trying to impress anyone. Anywhere I go to it’s just me; my family life and everything. I mix but am not the type that goes places and do what I’m not suppose to do. So, I do what I can do in my private life and what I should do outside, socially. So it’s just me all the time, every time.

He always appears trendy and stylish, especially with his walking stick. What informs his style?.

Two things, the fact that I’m a child of teachers. You know what it is to be raised by teacher parents. Also, it’s inborn for me because right from my youth days, I have always wanted to stand out. I believe your style defines you naturally.

What is his philosophy of life?

Well, just keep on doing it, I mean, be good as much as possible, enjoy your life to the fullest. At any time, God can call you, so at least I make sure that I’m happy all the time and that’s why I advice anybody to live life to the fullest and enjoy yourself to the fullest. Having God on your side that, one day, you will finally go there to meet your Creator and it can come any day. That is my philosophy of life.

Let’s tell you more about Chief Ope Bademosi who was born on the 1st of May, 1951 to the late Mr. B.A. Bademosi, an educationist of high repute and madam Abigail Bademosi (nee Adeloye).

After completing his primary education at Bishop Philips Memorial School in 1962, Ope gained admission to St. Joseph College, Ondo in 1964 for his secondary education. After that,he proceeded to the prestigious University of Lagos where he obtained a degree in Biological Sciences in 1977. Chief Ope Bademosi teamed-up with his childhood friend, Mr. SeyeOladapo, to establish Stanmark Holdings Limited, a parent organization that oversaw interest in banking, oil services, commodity trading and manufacturing. To actualise a deep-seated urge for the industrial development of Ondo State and the welfare of the local Ondo community, Stanmark Cocoa Processing Company, a collaborative manufacturing effort between Stanmark Holdings and Cadbury Nigeria Plc, was sited in Ondo town on the advice and insistence of Chief Ope Bademosi.

In the banking sector of the economy, Stanmark Holdings Limited together with some other corporate entities such as Odua Investment Group became core investors andbought over the ailing National Bank of Nigeria whose fortune was reversed along the path of profitability before its acquisition by WEMA Bank during the recapitalisation exercise. After the acquisition of National Bank Limited by Wema Bank, Chief Bademosi  became a non-executive Director of Wema Bank Plc, the position he maintained  for four years.

Following a reorganization in Stanmark Holdings Limited after which divestments from some business were necessary, Chief OpeBademosi and some partners founded the Amalgamated Mining and Exploration Company Limited of which he was Chairman till death. He also served in that same capacity in Creditswitch Limited – a telecommunication support company. He also sat on the board of other companies such as Alliance and General Insurance,Zokahm Nigeria Ltd – a Syrian managed construction company based in Nigeria.

His social life, driven by his desire and willingness to serve people found  earlyexpression in the following capacities: Foundation member and  the Chairman, Ondo Development Council (ODC), a community effort to bridge the service delivery capacity of government and the emergent developmental challenges of Ondo community. Pioneer President of Zenith Club of Nigeria – a top rated and highly innovative club dedicated to uplifting of Ondo sons and daughters. Chairman of the umbrella club of all Ondo clubs – Association of Ondo Clubs, Lagos. Chairman, for two consecutive years, of the Ekimogun Planning Committee and the first to cross the million naira mark in fund drive in 1991

Member – House of Lords, Ibadan-Membership of the apex club, CLUB 75 of Ondo.

Right from his days at the Cathedral Church of St. Stephen, Oke-Aluko, Ondo, where he had his confirmation, he was a prominent chorister and a member of the Christian Crusaders. He was worshipping at the Archbishop Vinning Memorial Church GRA, Ikeja, Lagos where he belonged to the Fountain of Hope Society.

Again, the ever expanding network of friends and admirers of Chief OpeBademosi may be traceable to a charming and amiable persona developed over time through the cultivation of the right social graces and deft employment of good human relations. Together with his pillar of support, EBUN the remarkably elegant wife of Chief Bademosi, their marriage produced adorable children some of whom are already climbing the ladder of success.