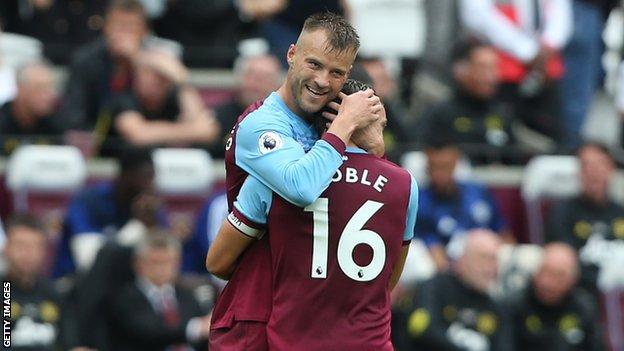 West Ham manager Manuel Pellegrini said his side are becoming “more consistent and more solid” after continuing their fine start to the campaign with victory over Manchester United.

Goals from Andriy Yarmolenko and Aaron Cresswell earned the Hammers their second successive home win against the Red Devils, who lost striker Marcus Rashford with a groin injury in the second half.

The result lifts West Ham up to fifth in the table – 12 places and seven points better off than at the same stage last season.

“It’s good to win, especially against Manchester United here at home and to keep a clean sheet. We tried to win from the beginning.

“We didn’t allow them to create chances and Andriy’s goal was the key factor to open the game. It was a good goal.”

Cresswell sealed all three points for the hosts in the second half with a superb free-kick into the top right-hand corner.

Chances were at a premium in a cagey first half at London Stadium, with Noble’s deflected effort from Pablo Fornals’ free-kick the closest either team came to a breakthrough before Yarmolenko’s strike.

“Maybe we played too fast in the first 45 minutes, which is why we lost so many balls,” added the former Manchester City boss. “But I told the players at half-time that if we defend the way we did in the first half, we were not going to concede too many opportunities [in the second half].”

Juan Mata should have levelled for the visitors two minutes after the restart but failed to hit the target after connecting well with Andreas Pereira’s low cross.