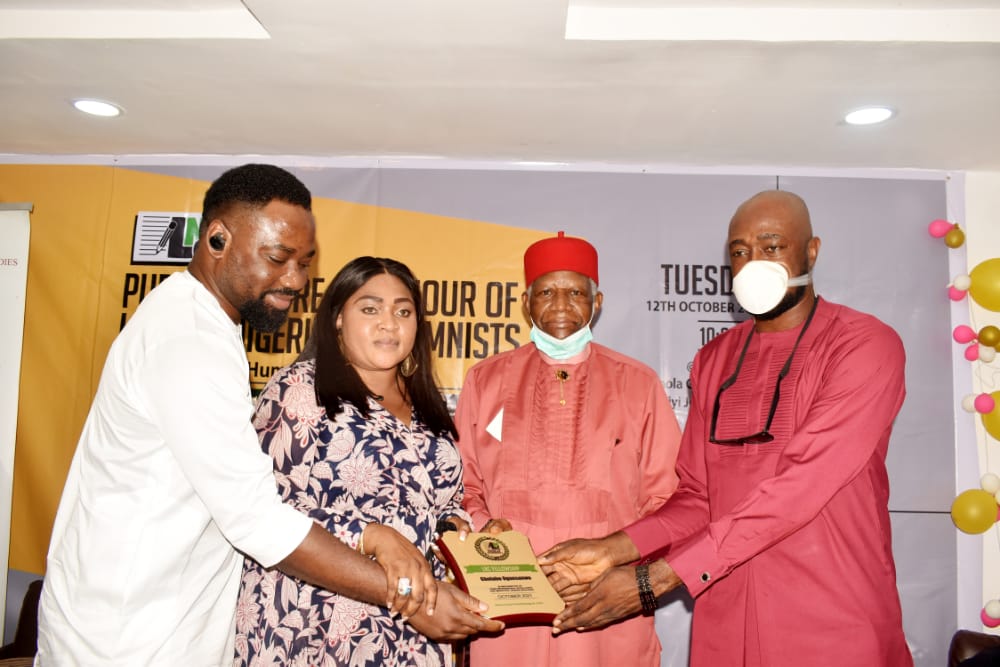 The League of Nigerian Columnists on Tuesday,12th October 2021 honoured a number of veteran columnists who have contributed greatly to Journalism practice in Nigeria.

The event was held at the Centre for International Advanced And Professional Studies,Off Adeniyi Jones Avenue, in Ikeja, Lagos. Among the honorees were the iconic Alhaji Lateef Jakande, popularly known as John West;late Gbolabo Ogunsanwo and late Sir Henry Olujimi Boyo.Both were celebrated and given posthumous awards which recognized them as Fellows of the League of Nigerian Columnists (FLNC). Other great columnists who were also honoured at the event are Uncle Sam Amuka Pemu a.k.a Sad Sam, Dr Haroun Adamu, a.k.a. Politicus and the Great Dan Agbese,a co-founder of Newswatch magazine.

The League of Nigerian Columnists (LNC) is a professional body which was inaugurated in 2018 with the agenda of ensuring good governance by holding the government accountable. With its slogan as ‘Pen Fraternity’, the group parades some of the most outstanding and impactful Columnists and Writers in the continent of Africa and whose works have been published by several papers, magazines and academic journals across the globe.

The ceremony was a twin event.It was an Award Ceremony and Public Lecture which engaged academics, media practitioners, students and leaders of thought in the audience.

The Public Lecture had the theme: “Security and Human Rights and was delivered by a Security expert and former spokesman of the Nigerian Army, Brigadier General Sani Kukasheka Usman (Rtd).
In the highly instructive lecture, Usman dissected the issues by identifying the challenges leading to the infringement on human rights amidst insecurity in Nigeria. He gave recommendations on how best to address the situation. He however called for good governance across board ,as a way of addressing the security challenges in the country.

The lecture was followed by a discussion which was anchored by the erudite Cambridge Professor of Strategies and Development, Anthony Kila. It engaged leading Human Rights Lawyers such as Mr. Ted Iwere, the Chief Executive Officer of SME Media Limited and Ayo Ogunsola Obe, a renowned lawyer and human rights activist, amidst other iintellectuals also took active part in the discussion.

The entertainment part of the event didn’t go unnoticed as guests were given a treat to remember. At the outset of the event, a collection of evergreen songs were played as guests were served snacks , beverages and Coffee. At the end of the ceremony, plates of small chops and cups of cocktails were served to keep them refreshed. The snacks and cocktails were neatly served by one of the top catering service providers in town, Larry Bee Catering Ventures.