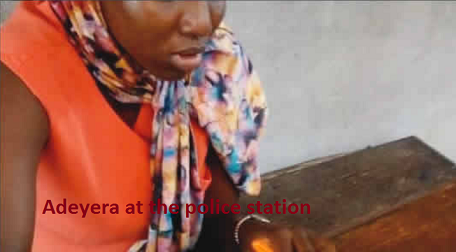 A doctor in the Lekki area of Lagos State, Dr Emmanuel Okolo, has been accused of brutalising a nurse, Dorcas Adeyera.

The incident happened at the Awoyaya Hospital and Maternity Centre, Ibeju Lekki.

Punch Metro gathered that Okolo and Adeyera’s misunderstanding stemmed from the treatment of a patient rushed into the medical facility in the early hours of Monday.

Okolo was alleged to have frowned on the admission of the accident victim without his consent, blaming Adeyera for the action.

The medical doctor allegedly summoned the 23-year-old into his office and ordered her to kneel down.

When the victim refused, 35-year-old Okolo was alleged to have dealt her several slaps and also flogged her with a belt.

Adeyera, in her report to the medical director of the hospital, said she was humiliated by Okolo.

The report read in part, “Around 2am, there was an emergency outside the hospital. I stepped out to have a clear look at the patient, who was said to have been involved in an accident and already fractured a bone in his left leg.

“Back inside the hospital, Dr Okolo, who had been to the emergency room, saw the patient being carried towards him. He suddenly got angry and asked why the nurse didn’t allow him to see the patient first before bringing him into the hospital. He pointed at me, blaming me for it and said I should get out of his sight, which I did immediately; only for him to get angrier and ordered the patient to be taken out of the hospital as he was not ready to attend to him.”

The Ife, Osun State indigene, said the doctor instructed her to ensure the order was carried out.

Adeyera said she left for the pharmacy after asking the patient to leave the premises.

“I left for the pharmacy with the hope that the patient’s relatives will source a means of leaving, only for the doctor to come in a few minutes later and dragged me into his office.

“I was shocked and tried to remove my hands from his hold; but he was too fierce.

“In his office, he told me to get down on my knees (kneel down) to which I declined as it was against the ethics of my profession to do that in uniform. He gave me the first hard slap and repeated his order; I refused and called my colleague for help.

“I tried to get out of his office, but he dragged me back and reached for his belt and started flogging me until the security men and my colleague came and tried to hold him. He said I was rude and he was not my age-mate.

“I tried explaining to the security men what had happened, but he did not allow me to speak out. He reached for the sphygmomanometer and was about using it to hit my head when the security men took it from his hand and another round of slaps on my cheeks followed. This time around, I fell on the floor and he started punching me,” she added.

Elemoro division, adding that she was treated at the Epe General Hospital.

She said Okolo had yet to report at the hospital since she reported to the police.

A Punch correspondent gathered that the police dropped an invitation letter for the doctor at the hospital.

“I cannot speak right now; I am with my lawyers,” he said.

He ignored subsequent calls to the telephone line and did not respond to a text message from Punch.

The spokesperson for the Lagos State Police Command, CSP Chike Oti, said the police were looking for the suspect.

He said, “The case was reported and we are investigating. Efforts are on to arrest and interrogate the doctor.”

Lekki Doctor Flogs Nurse, Asks Her To Kneel Down was last modified: June 22nd, 2018 by Reporter