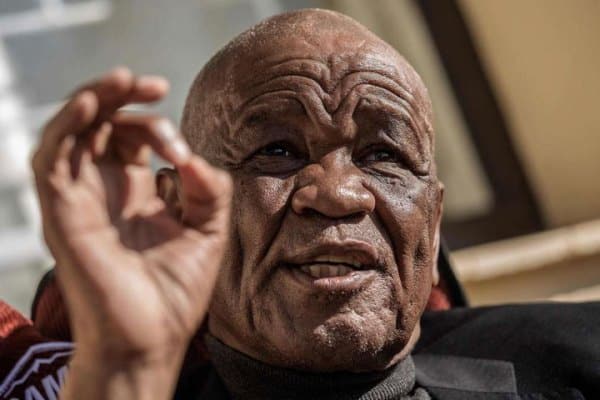 But his inauguration was marred by the murder of his estranged wife, Lipolelo, 58, who was gunned down on Wednesday night in a village near the capital Maseru

The new Prime Minister of Lesotho, Thomas Thabane, on Friday took the oath of office as the head of a coalition government, two days after the murder of his estranged wife.

Thabane’s All Basotho Convention won snap elections on June 3, but failed to get an outright majority, leading it to negotiate joint rule with the Alliance of Democrats, Basotho National Party and Reformed Congress of Lesotho.

But his inauguration was marred by the murder of his estranged wife, Lipolelo, 58, who was gunned down on Wednesday night in a village near the capital Maseru.

Thabane’s new coalition government comes into office with the hope of ending the political uncertainty of party splits and fragile coalitions that have long dogged the mountain kingdom.

He said it was disturbing that Lesotho was increasingly becoming notorious for its failed governments and that it was time to change.

“I sincerely hope that political reforms will bring stability in Lesotho and ensure that Lesotho governments last for a normal five-year term,” he said in his inaugural speech.

The new alliance replaces the government of Pakalitha Mosisili, a seven-party coalition plagued by infighting and corruption.

Mosisili’s government was toppled in March and elections triggered after opposition parties called a vote of no-confidence which he lost.

At the ceremony, which was held inside a stadium in Maseru, Thabane thanked his predecessor “for facilitating the smooth transfer of power” and said the two would “remain friends forever.”

Thabane, 78, previously served as premier of this nation of two million people after the 2012 elections but was forced to flee to South Africa following an attempted military coup two years later.

In his speech, Africa Review reports that Thabane commented for the first time on the killing of his estranged wife.

“I am mourning her death and (the) senseless killing of people like this… is one of many challenges that I am faced with as a new prime minister,” he said.

The gunning down of Thabane’s wife just two days before he took office created a sense of confusion in the tiny poverty-stricken country which is completely surrounded by South Africa.

Police confirmed Wednesday’s killing of Mrs. Lipolelo Thabane, an incident which has raised the fears of another wave of political violence in the southern African mountain kingdom.

Police spokesperson Clifford Molefe said Lipolelo was traveling home with a friend when both women where shot by an unknown assailant in the town of Masana, just outside the capital, Maseru.

Molefe said Lipolelo died on the scene while her friend was taken to a nearby hospital. Molefe said the motive of the shooting was unknown and that investigations were ongoing.

Lesotho, which has been on a political knife-edge since an attempted coup in 2014, held elections last week, the third in five years, after then-prime minister Pakalitha Mosisili lost a no-confidence vote in March.

Thabane and Lipolelo had been living separately since 2012 after Thabane filed for a divorce which had yet to be granted by the courts.

However there are indication that the Lipolelo is an estranged wife of the Prime Minister, who was either trying to stage a come back or make claims on her husband.

There had been no love lost between her and her husband’s current wife.

These facts were reflected on social media reports which have gone viral in less than 24 hours after her death.

Mpatsi reports that that news had it that Mme Lipolelo Thabane was a threat to first-lady benefits hence her killing. heart breaking.

Mathe V.K. Ntsekhe‏ said: ”Let’s be clear on one thing: Mme Lipolelo Thabane had her reasons & right to want to claim benefits of being a first lady!”

Suntosh Pillay Tragic and shameful! Lipolelo Thabane has been shot dead on the eve of her husband Tom’s inauguration as Prime Minister.

Farmer arraigned in court for allegedly stabbing man to death