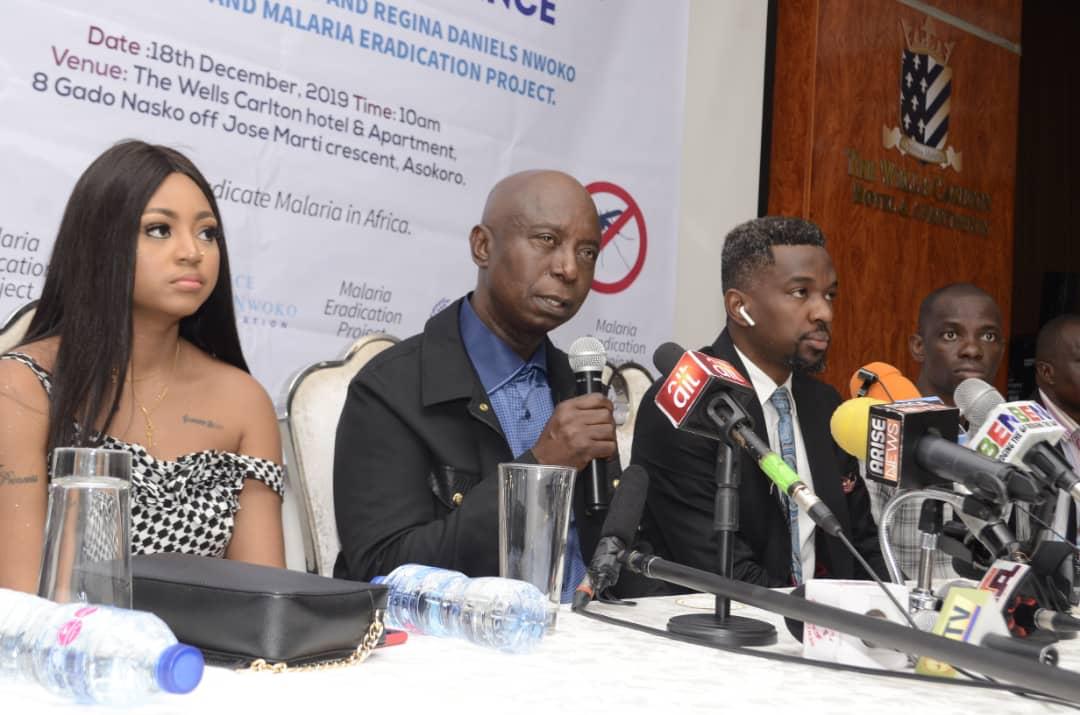 Today, my foundation formally begins an audacious journey towards a malaria-free Nigeria and Africa. In this project, we will work with national and multilateral organizations. We will equally collaborate with governments, private organizations and civil society towards achieving our core objective of extending malaria intervention programmes beyond the threshold of control and palliatives. We have our eyes fixed on permanent solution to the age-long scourge.

Prince Ned Nwoko Foundation is committed to rendering support and services to the needy, the society and humanity at large. In the course of our various interventions we discovered that malaria scourge constitutes one of the greatest impediments to the general wellbeing and development of Africans and their societies. Most health challenges suffered by Africans including death, organ damage and other physical and mental impairments are directly or indirectly traceable to malaria. Also, the parasitic disease causes huge economic loss by draining considerable funds that could have been used for support growth and general societal development. Malaria does not only cause loss of life but also interferes with athleticism, socio-economical activities and general way of life of the people over sustained period.

My foundation is of the firm conviction that Africa must permanently overcome the recurring yearly tragedy of hundreds of thousands of avoidable health complications and deaths as a result of malaria attacks.

The Prince Ned Nwoko Foundation which I am privileged to conceive and chair is a non-governmental organization. The foundation is the vehicle for driving this anti-malaria project with the expected support of stakeholders. The core areas of intervention by the foundation are Health, Environment, Education, Tourism, Sports and Culture.

By the grace of God, the foundation has been an organ for bridging gaps in delivery of essential services through support for the needy including the sick, the handicapped, the elderly, the poor, widows, students and the vulnerable segments of society generally. The foundation is also involved in talents discovery and development across many areas such as sports, music, drama and some other aspects of entertainment.

I must confess that it is my inclination to empathize, assist and care that made me and my wife, Regina Daniels Nwoko to embark on what we are unveiling today which is mosquito elimination and malaria eradication programme.

Here, I need not belabor the fact that malaria is a very deadly infectious disease that has been afflicting mankind for thousands of years. According to the World Health Organization (WHO), there are about 200 million cases of malaria infection worldwide annually. Nearly 600,000 deaths result from the cases yearly with 90 percent of the deaths occurring in Africa.

There are reasons behind the concentration of malaria infections in Africa. First, the majority of infections in Africa are caused by plasmodium falciparum, the most dangerous of the four human malaria parasites. Secondly, the most effective malaria vector, the mosquito anopheles gambiae, is the most prevalent in Africa. The anopheles is equally the most difficult to control. The other reason for the high level of malaria in Africa is the fact that the scourge has not been combated with the kind of seriousness it deserves considering Africa’s peculiar geography and climate.

Available statistics shows that the six highest burden countries in the WHO African region (in order of estimated number of malaria cases) are Nigeria, Democratic Republic of the Congo, United Republic of Tanzania, Uganda, Mozambique and Cote d’Ivoire. These six African countries account for nearly 50% of malaria cases worldwide according to recent World malaria reports by WHO. The reports show that children are the most vulnerable group affected by malaria. For centuries, apart from malaria, mosquitoes have been the cause of several other ailments ravaging Africa such as Yellow fever, Dengue fever, Filariasis and Zika.

Each time I meditate over the debilitating effects of the scourge of malaria in Nigeria and Africa, certain questions come to my mind: Must Africa continue to reel under the burden of malaria scourge in perpetuity? Beyond the current treatment and control measures, can’t more efforts be put on researching for reliable vaccines against the disease? Since mosquito is the vector that transmits malaria infection, what can we do to eliminate or drastically depopulate the vector on the African continent? The search for answers to these posers inspired me to embark on this project. And I believe that we can succeed in the challenging task given our collective resolve and commitment. No people are better positioned than Africans themselves to take the front seat in seeking a permanent solution to Africa’s most formidable health challenge – malaria.

We have our short and long term objectives at the Prince Ned Nwoko Foundation.

SHORT TERM – The short-term delivery plan shall be National mobilization for the fumigation of Nigeria and other African countries. Prince Ned Nwoko plans to sponsor a Bill at the National Assembly, Abuja for there to be a National Fumigation Day in Nigeria. We will encourage the same measure Africa in other African countries. To achieve performance, community members will be made stakeholders of their environments in the mosquito elimination campaign. Community town hall meetings shall be held to appoint Sanitation Ambassadors and Officers.

LONG-TERM PLAN – My Foundation’s long-term plan in delivering this project is investing in development of anti-malaria vaccine. The Foundation plans to establish Academic Research Grants for Malaria Vaccine in universities spread across the African continent. The grants shall be available to be accessed by scientific scholars in Africa. There shall be a proper selection process and body of judges for the most qualified students and researchers to access the grants.

Eliminating mosquitoes and eradicating malaria in Africa require a fundamentally different approach when compared to controlling malaria. Therefore, to eradicate malaria and other diseases spread by mosquitoes, it is necessary to take deliberate steps to drastically depopulate the vector in Nigeria and the entire Africa. We intend to take the mosquito elimination and malaria eradication programme should be taken to the point where the disease won’t constitute a threat to public health. The Prince Ned Nwoko foundation appreciates the concerted efforts of the civil society and governments in combating Malaria in Africa. The foundation lauds the various interventions already in place such as the Roll Back Malaria programme and provision of treated mosquito nets which have indeed helped a great deal to curb the scourge. As already stated, the foundation is committed to working together with relevant stakeholders to deal a fatal blow on the malaria pandemic to pave way for a healthier and more prosperous Africa.

It is noteworthy that since 2000, when Africa with the support of multilateral organizations began an aggressive effort to control malaria, significant achievements have been made in controlling disease. In continuation of the previous and ongoing initiatives, we are embarking on this project to eliminate mosquitoes and eradicate malaria in Africa to the point where it will no longer constitute a significant public health problem on the continent.

In the wake of 2020, precisely on January 5, my Foundation will kick-start this campaign with a symbolic expedition to mosquito-free Antarctica located at the South Pole. Upon flagging off the project we shall urge the United Nations [UN] to dedicate a date to promote the campaign for elimination of mosquitoes and eradication of malaria in the world.

Upon return to Nigeria, we will collaborate with stakeholders to pursue the following measures and objectives in furtherance of the anti-malaria campaign:

· Sponsor a bill at the National Assembly of Nigeria for a National Fumigation Day and urge other African countries to follow suit.

· Partner with relevant government organizations and agencies, local and international community to achieve the goals of the foundation and bring this to the attention of the world.

· Improve on health education and environmental sanitation in our communities in order to deny mosquitoes breeding places.

· Carry out public enlightenment campaigns in collaboration with relevant civil society groups, governments, grassroots organizations and individuals on environmental health promotion with particular emphasis on elimination of mosquitoes and eradication of malaria.

From the realm of mass mobilization, our guiding principle in this project is for everybody to own up to his land, facility or premises and wipe the vectors out from there. Our cardinal goal of this project is to accelerate towards the attainment of malaria free Nigeria and adopt the same model in other African Countries.

Our public engagement shall be guided by the following objectives:

· To launch collaborative platform for malaria eradication in Africa.

· To establish an Academic Research Grant for malaria vaccine.

· To encourage communities and individuals to take ownership of the programme and its activities in their spheres.

· To create an enabling sub-regional approach that will allow all the countries in the continent to achieve their mosquito elimination goals, thus accelerating progress towards a malaria-free Africa.

· To influence African Leaders to establish National Day of Fumigation across Africa.

PARTNERSHIPS- In order to achieve malaria elimination in Africa we need to engage the key regional and global partners working in the area of malaria prevention, health and development. In this line, we are hoping to partner with governments, the United Nations bodies – UNESCO, WHO and UNICEF, the Association of Local Governments of Nigeria (ALGON), Ecological Funds [Nigeria], Federal Ministries of Education and Health of African countries, the National Orientation Agency [NOA] Nigeria and similar agencies in and others.

Our target is to a central player towards achieving a declaration of malaria-free Nigeria and Africa by the World Health Organisation by the 2030. We align with the Sustainable Development Goals [SDG] Action Plan that ending malaria saves lives and unlocks human potential. Malaria is a disease of poverty and results in poverty. We believe that investing in malaria prevention and elimination means investing in healthier and more prosperous societies. The core objectives of my foundation tally with the SDGs plan of Ending Poverty (SDG 1), Improving Health and Well-Being (SDG 3) and Ensuring Quality Education (SDG 4).