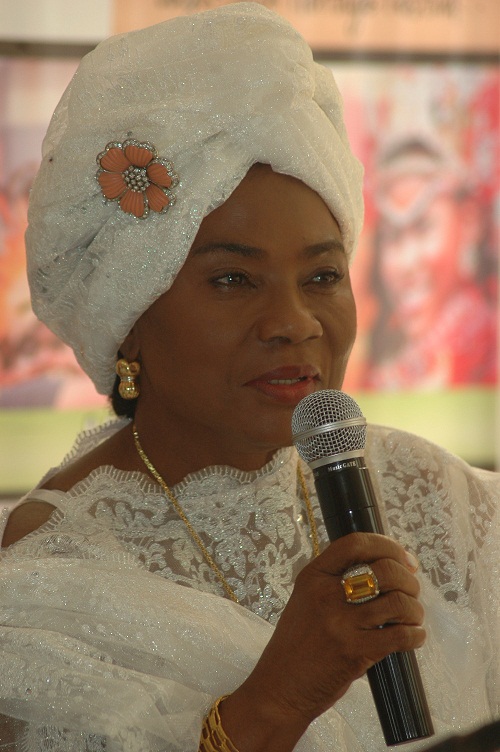 Adewunmi Elegbede is one of the children of the Erelu of Lagos, Erelu Abiola Dosumu and her late husband, Major Tunde Elegbede.

Adewunmi Elegbede is an IT expert. He was in the country for the celebration of her mom’s 70th a few weeks back. She turned 70 on July, 28th 2017.

TESSY MOORE, who was at the event interviewed him. Excerpts

How do you feel about your mother turning 70?

I am excited, happy and elated. It’s a wonderful thing because if you look at my mother, she does not look her age. She looks sweet 50 . So, I feel more as if we are celebrating her 50th birthday. I wish her  more years as this, so that in  her 80th and 90th,  we would still be celebrating her as we are doing   now.

Where are you based?

I am based in the UK,  but most of my works are in Nigeria.

What are you into?

I am into Information Technology, which comprises computer, programming. e-mails, creating websites application development for large and medium institutions. Anything that requires programming software in technology  is what I am into.

As the son of Erelu Abiola, what position are you among your siblings?

I am the second son of my mother.

Growing up was very exciting as you can imagine, having a mother, who is well known in the country, you can therefore,  imagine that one day you are helping the average person on the road with some of the Charitable Foundations she’s involved in, she is also involved in humanitarian services.

Then, the next day,  you are sitting with some international dignitaries. So, it’s always been  different activities and engagements that you never know what you are going to get next. That sort of thing gives you grounding for life. You can be easily seen or noticed anywhere you go in the country, you can be anywhere at Surulere or Ikoyi and be noticed. and this really makes you  to be comfortable. You can be anywhere abroad and be comfortable, and that confidence and assurance draw people to you as you can notice the same with my mum, because she is the kind of person who is very strong. She knows her mind and always wants to do the best for everyone around her, especially Lagosians and Nigerians at large.

Were you born here in Nigeria?

Yes, I was born here.

Was it your father,  the Late Elegbede who was killed a few years back?

That was my uncle. Though members of my father’s family were military men and they diligently served Nigeria, especially during the civil war.

Initially, we lost my father in the 70’s, Major Tunde Elegbede was also killed, it was a serious  agony for the family because his untimely death left a wide deep vacuum  but his brothers went on to become  Admirals, one of them was in the Military Council. He was the one people knew more because because his lfie has been in the public recently. The Elegbedes  are very well known, they are indigenes of Lagos. In my father’s side, we are the Aworis,  who are supposedly the founders of Lagos.

But on my mother side, we are the Dosunmu’s.

I know you are married, but how long have you been married?

I celebrated my 16th wedding anniversary just a few days ago.

Who is your lovely wife?

I am married to Omolara Elegbede.

Where did you meet your wife and what was the first attraction?

Oh! I met her in United Kingdom during the World Cup, we were in our 20s then . We were part of the Nigerian Rocky Club, in the UK, myself and some other Nigerians. I went to school with and those I met during our University days in the UK formed the club. My friends were more into the club, but I participated as well and we formed a great alliance. During one of the World Cup events, the Nigerian Team happened to be playing and they were playing so badly. So, l stood up and insisted that our team move and play better, we were in a large crowd.

That was where a young lady stood and approached me and made a remark that she was impressed with  the  way I stood up to express my disatisfaction about the way the Nigerian team was playing. That  was how we exchanged numbers and our romance began immediately from there.

Did you know she was going to be your wife at the end of the day?

Yes, somehow I knew. I will definitely say that we were attracted to each other on the first day we met owing to our body language. I am a very social person, I have deep perception of most things . Yes, it was love at first sight for both of us, there was something spectacular about her the first day we met which I can’t still explain till now. It wasn’t her eyes, height  or beauty though, she has them but something unique.

What has kept your marriage so intact for 16 years?

One of my lecturers once told me that the best marriages are two great forgivers.

If you see someone who forgives every thing you do in marriage, your marriage will definitely be  a perfect one .

I think the real joy of it all though, is when you have children, they always bring joy to the home and I have 4 adorable kids, 2 boys and 2 girls.