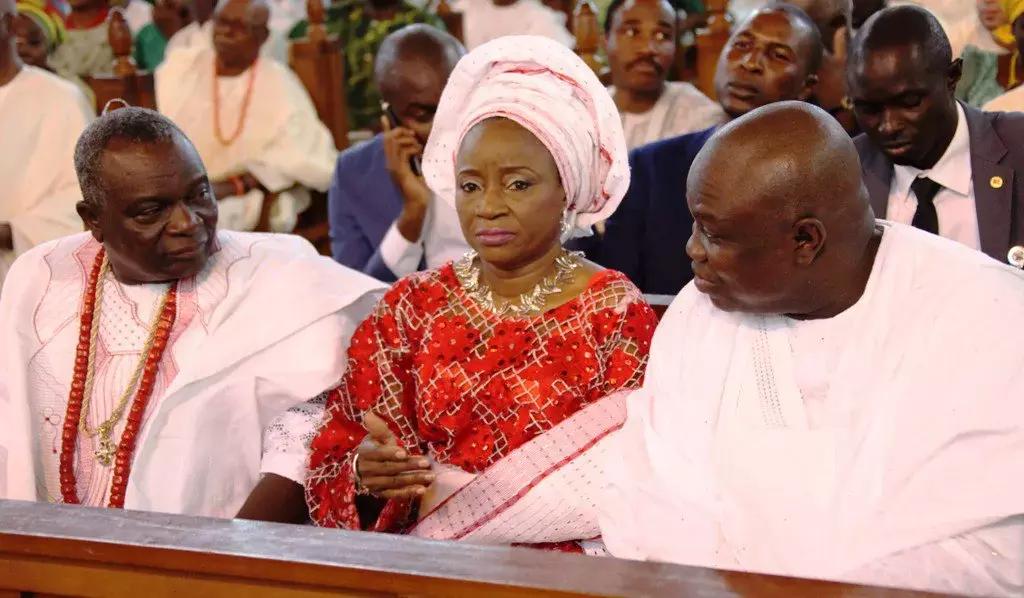 Born 13th of March, 1952, 65 years ago, Princess Omolola Oyinlola is the pretty wife of Ex-Osun Governor, Prince Olagunsoye Oyinlola, a prince from the Okuku royal family in Osun State. The beautiful woman who looked less her age with a lovely stature and beautiful skin to go with was the former First Ladies of Lagos and Osun States when her husband was holding forth as its Governor then and she did this for 10 years. She is a deacon and the founder of Women and Children Development Initiative Foundation, WOCDIF, a Foundation which is predicated upon the need to impact positively on the life of women and children in Osun State through appropriate legislation and programmes that will enhance their rights, empowerment and happiness and ultimately, to lend support to the alleviation of the numerous constraints to women’s and children’s full participation in the development process. This is one of her numerous give back to the community programme that she is doing.

We can not forget hurriedly in year 2015 when this beautiful woman gave out her daughter Oyindamola’ hand in marriage and 2 years after, she gathered family and friends again to celebrate another glorious moment as her last daughter whom she fondly calls, baby of the house, Olayinka got married in a spectacular wedding to Chief Bukola Okunowos son, Juwon in Lagos penultimate weekend,The party which had all the who is who in Nigeria in attendance did not fall short of fun as everyone regardless of status enjoyed it till the end. The woman who rarely grants interview spoke with the Editor of this magazine amidst her busy schedule on the day, she narrated her journey to matrimony,she talked about how her daughter who was getting married was kidnapped at the age of 4,how she was found, her most gracious moments and how she has sustained her marriage of 39 years to her husband whom she fondly calls Olly.

She poured out her mind on how she felt on the day, “I feel on top of the world, I am the most excited today. I give glory to God and also grateful to God.  I thank God for my daughter that God did not allow my joy to be taken away at a tender age. I give glory and thanks to God.it is the joy of every parents today is to see their child getting married.  All our efforts are not in vain. He made today possible”.

Though she wrote a book titled, and narrated her encounter with Faith, how her daughter, the bride, Olayinka was kidnapped and also how she was found but she chipped in on the situation, “where do I start from, that I did not labor in vain on Olayinka. I give all glory to God, if you read my book,I have been working on it for so long,you will understand how it all happened,Olayinka went to school in Jos with her elder sister, Oyindamola in 1993 and I was told a young lady took her away.We eventually found her in Otukpo, Benue State through the help of a man who knew us.  Her kidnapping disoriented me but here we are today giving thanks to God. She also took us through how she became part of the Oyinlola family, she is from the popular and influential Majekodunmi family from Ogun State. “My family story and beginning can be traced to an event of 1 July 1978. That was the day I aligned myself to the royal palace of Okuku by marrying one of their sons, Prince Olagunsoye Oyinlola.  “Apart from dictates of culture and the personal responsibilities of marriage,the essential quality of marriage and worldview of my family were shaped by the decision my husband took 9 years before our marriage.  As a young prince, he had taken an unusual step then of joining the army.  The date was Sept 3rd 1969. And that decision was to have an overriding effect on our family life and everything we ever did afterwards.being married to a military man has its frills and chills.  Sometimes it gives a sense of power, of security,on the other hand ,being married to a soldier sometimes seems like albatross,a cross almost too heavy to carry. A soldiers wife is a lady under indirect orders and secondary deployment.my husband was a captain in the Nigerian army in 1978 when we got married.before then I was living in Lagos while he was based in Ibadan.we eventually made our home first in Ibadan and then he was moved to Nsukka in 1980 as the commanding officer of the 211 Tank Batallion”. She took us down memory lane what the attraction was, she said I have been close to his family before I met him. He has a niece known as Iyabo who is my very good friend and through Iyabo I got to know his brother,Toye Oyinlola and his wife who takes us out to family parties. I was the chief brides maid at Iyabos wedding in Okuku. The three of us are so close that we wear same outfits to functions.so it was during one of the parties that we met,then when Oyinlola was posted to maiduguri. The attraction for me was that he is very apologetic. Once he realizes he is wrong, he comes back to say sorry which is not common amongst military men because I always thought they are arrogant”.

How has she been able to sustain her marriage of 39 years, wow,it is only God that can do it.The moment you take everything to God in prayer,he will surely lead and guide you. God is our number one.Being married to a military man is not easy but I tried and determined I must make it work.