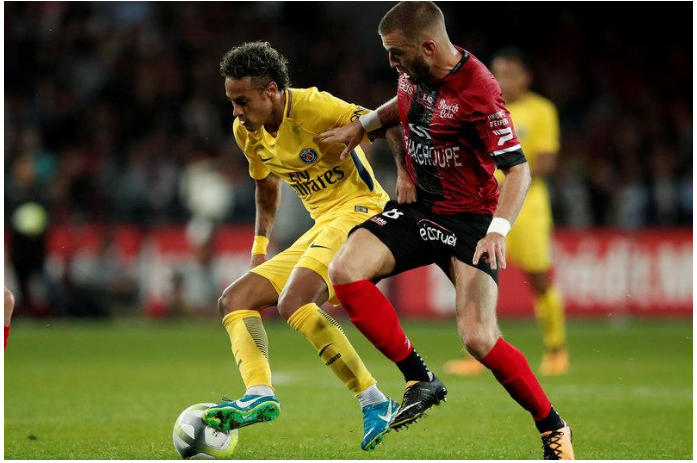 Football most expensive star, Neymar lived up to expectations as he showed his class on his Ligue 1 debut on Sunday, scoring one and setting up another goal in Paris St Germain’s 3-0 win at En Avant Guingamp.

The Brazil international who joined PSG for a record-breaking 222 million euros ($262.47 million) from Barcelona in August, found Edinson Cavani with a perfectly-timed, through ball after the break and the Uruguay striker added to Jordan Ikoko’s own goal.

Cavani returned the favour with a perfect cut back and Neymar poked the ball home eight minutes from time.

The record attendance at the tiny Roudourou stadium was broken as 18,378 fans attended the much-anticipated debut of the Brazil forward.

Neymar regularly made himself available and his neat passing in small spaces gave PSG several chances, his relationship with Cavani looking particularly promising.

In the 35th minute, he scooped a delicate cross above the defence but Marquinhos’s header crashed onto the bar.

Neymar continued to treat the crowd to some delicate turns, but it was a rookie mistake that put the visitors ahead seven minutes into the second half, when Ikoko’s pass back to his keeper ended up in the net.

The Brazilian was more decisive on the next goal as he set up Cavani, the Uruguayan scoring with a low shot after he collected his new team mate’s long pass in the 62nd minute.

Twenty minutes later, Neymar was at the receiving end of Cavani’s work to wrap a near-perfect debut.

PSG are second on six points, behind Olympique Lyonnais on goals scored with Monaco, who thrashed Dijon 4-1 away earlier on Sunday, in third place also on six points.

Despite Monaco fans’ concerns that French prodigy Kylian Mbappe might be leaving, they know they can still trust Radamel Falcao after the Colombian striker hit a treble.

France international Mbappe was left on the bench amid speculation that he wants to join PSG but he was not needed as Monaco equalled the record of 14 consecutive wins in the French league.

Falcao scored twice before the break and once after to take his tally to four goals in two games while Jemerson netted another.

Earlier, Lille were beaten 3-0 at promoted RC Strasbourg, conceding all three goals after striker Nicolas de Preville took over as goalkeeper following the sending off of Mike Maignan in the 63rd minute.

A Particular method of Cooking Rice Could Give Rise To Hypertension, Diabetes, cancer or death