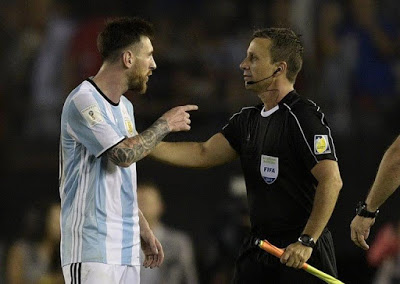 Argentina star player and captain, Lionel Messi was fined the sum of $10,200 and suspended for Argentina’s next 4 games for using insulting words on a match official, World football’s ruling body, FIFA announced.

Assistant referee Emerson Carvalho ruled a foul against Messi in the second half of last week’s Thursday’s game in Chile. Messi strongly disagreed with the ruling and waved his arms while shouting and hurling abuses at Carvalho.

FIFA after a thorough investigation found Messi guilty of insulting the referee as Messi after the game shook the hands of two officials, but did not shake Carvalho’s hand.

The ban which became effective from the moment it was announced on Tuesday, immediately ensured Messi missed out on Argentina’s game with Bolivia on Tuesday night, a game they lost 2-0. The ban placed on Messi, however does not apply to his club, Barcelona, but his country’s football federation insists they will appeal the ban. 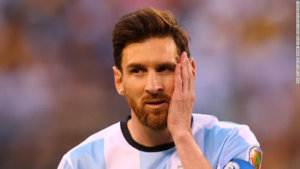 “The federation will appeal, as it should,” the team secretary Jorge Miadosqui told Agence France-Presse. “We feel powerless, surprised.”

Argentina are now third in the South American qualifying standings after Tuesday’s games. Four teams advance automatically from the region, while the fifth team faces a playoff against a team from the Oceania region. With four games remaining, Argentina is a point out of fourth place