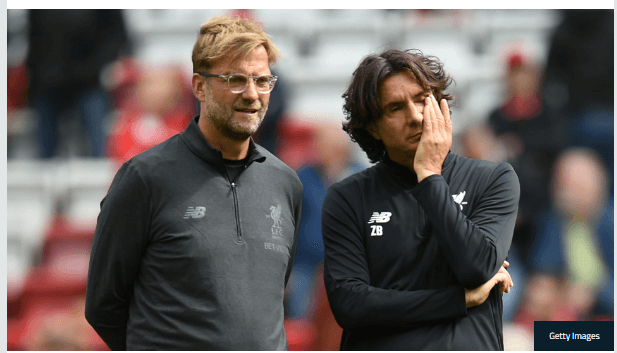 Liverpool assistant manager Zeljko Buvac is to take a break from his role at Anfield – dealing the Reds a significant blow ahead of their Champions League clash with Roma.

The Bosnian-Serb has been Jurgen Klopp’s closest ally throughout his managerial career, but will not be part of his coaching staff between now and the end of the season due to personal reasons.

Liverpool’s players were informed of the news on Sunday. Buvac was present for the goalless draw with Stoke City 24 hours earlier, but will not fly out to Rome with the rest of the Reds’ travelling party on Tuesday. Peter Krawietz, the third member of Klopp’s coaching triumvirate, will take on a greater role in his absence.

Liverpool sources insist that Buvac’s position is not affected by his absence, and that he remains a club employee. There will be no official comment from the club due to the private nature of the issue, but the news at the very least raises doubts as to his long-term future at Anfield.

Buvac, 56, moved to Merseyside alongside Klopp in October 2015. The pair first met as players with Mainz in the early-1990s, forming a close bond, and when Klopp took over as manager of the German club in 2001, it was Buvac he chose as his No.2..

The pair stayed at Mainz until 2008 before moving to Borussia Dortmund, where they enjoyed significant success including two Bundesliga titles, a German Cup win and a Champions League final appearance. They left together in the summer of 2015

Klopp has described Buvac as “the brain” of his coaching team, and the former midfielder’s tactical knowledge has been key in developing the high-energy ‘gegenpressing’ style used at both Dortmund and Liverpool.

“I’ve made a lot of good decisions in my career as a manager,” Klopp has said. “But the best one was appointing Buvac as coach – he’s the best coach I’ve ever known. He’s the one I’ve learned the most from. We’re like an old married couple, and that’s sensational.”

“In training, I am observing and watching and if I have the feeling something needs to be changed I will speak to Kloppo. We discuss it, ‘Why should this be? Why that?’ But it is a decision we come to together. That is the way in training and that is the way in the match.

“If it is necessary, I get up from the bench and that is okay. I don’t need to ask. Together with Peter [Krawietz] we have six eyes. You see more than if only one man is looking.”