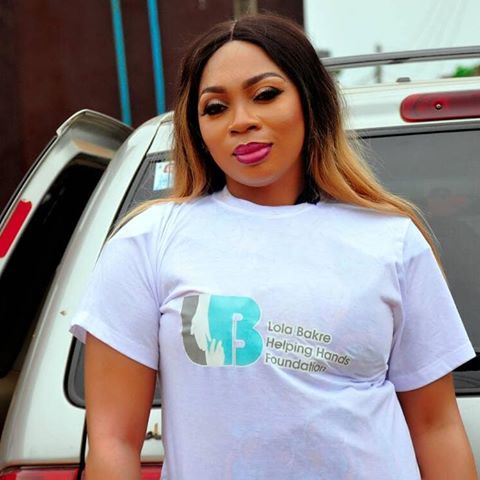 Many were called, but a few would be chosen. Among those who want to be chosen to dance to the rhythm of Youth Can do it lyric is Omolola Bakre, a lady with a heart of gold, a philanthropist, who has carved a niche for herself in giving without looking back. She has never relented in putting smiles on people’s faces.

Omolola is currently running for the seat of Ijebu-Ode Constituency in the House of Assembly of Ogun State.

Bakre Olarenwaju Omolola popularly known as HON BOO is a lady ready to serve her people and do all within her power to give them a better life. She is a lady of virtue. She has been a lady full of care, a mother to the motherless and a sister to all. She developed an interest in the care for and well being of people in  a maternity home and clinic run by her mother after her mum’s voluntary retirement from active service with the Ogun State Hospital Management Board.  Service to humanity runs in the family of Bakre. She owns a Non-Governmental Organisation (NGO) called Bakre Omolola Helping Hand Foundation. She has been helping the old, youth and so many others through her NGO. So many testimonies have been shared about the great impact of her NGO on people’s lives.

Born in the city of Abeokuta, Ogun State, Nigeria early 1980s, by a midwife, working at that time at Ijaiye General Hospital. She was, indeed, a blessing to the family of Bakre. She spent some of her childhood in her father’s land Ijebu-Ode, Ogun State.

She attended Osintelu Memorial High School, Ogere Remo between 1992-1998. She went to Nigeria Institute of Journalism, Ogba Lagos, where she studied broadcast journalism. She also has Higher National Diploma in Marketing from the Polytechnic of Ibadan in 2004. She attended Lagos State University (LASU), studied Economics, but in her third year got a calling that was to later see her bagged a University degree in Housing Development Management from South Bank University, London, United Kingdom.

She is blessed with 3 adorable kids, her passion is to make an impact in governance through sponsorship of Bills that positively touch the lives of the downtrodden populace. Her first job was at a social service office and she is currently a house manager with Megillah Properties, UK.

She started her political career in order to have the opportunity to speak for her people. Her slogan remains Service To The People. She believes in the quote: “if you want to go fast, go alone, but if you want to go far, go with people.” The strength that keeps her going is seeing her people happy. The greatest lesson she has learnt in life is that you live when your life affects people without hope and you restore their confidence. HON BOO loves reading, visiting places of great tourism potential and also helping people from different backgrounds.

Recently, she visited City People’s head office. She spoke with Assistant Editor, Sunday Adigun, on why she joined politics after returning from London and how she intends to run politics with her NGO.

Tell me about your interest in politics?

I think it’s the charity work, which I’m used to that actually inspired my interest in politics. There are lots of work to do in this country compared to other countries. Politics in Nigeria, is quite different from those of other countries. There was a day I went to Ijebu to donate exercise books, pencils, erasers, e.t.c.

They told me that I would need to write a letter to the Commissioner of Education before I could give pupils. I was like why do I have to write letter because I want to give pupils just  exercise books and it’s not as if I wrote my name on them. Any way, I agreed, then I went to the local government to seek permission because I could not return to Lagos with the books. I met with the Chairman, they collected the books, we took photographs for record purpose, and I left. When I got home, I said to myself: “So, I have to pass through all this stress because I want to give out something I bought with my own money. What does it even take to be a politician? The following day, I called my brother to inform him that I was interested in politics, he asked why and I narrated the whole story to him.

Of course, if I’m a Commissioner, I won’t need anybody to do what God sent me to do.

So, that was what prompted me to join politics.

Why House of Assembly?

That is the only post I believe I can contest for. I don’t want appointments. I want my people to choose me not that one Governor will give me appointment to be a Commissioner.

I want to be a grassroots politician.  I want my people to know me and give me the responsibility serve them and represent them. I’ve been to my ward, I know my people and I know what they are going through. I’ve seen the women in my ward, I’ve seen the widows, I’ve organised empowerments for them severally, so I know their pains. A widow sometime walked up to me and told me how she had been the one taking care of the home since the death of her husband. She has children in the university and secondary school and at that time she had nothing on her. I could feel her pains and understand what she was going through. People need to know who is representing them and that is what I want. Let my relationship with my constituents speak for me.

How cordial is your relationship with the people in your constituency?

They love me. Infact the leaders there approached me first.

Did they approach you because of your money or your pedigree?

I don’t think they approached me because of money I’m sure it’s because of what they heard about me. I don’t even have the money that anybody wants to collect. Agreed I came back from London, but I have never spent a kobo for anybody. Everybody in my constituency is well to do, they don’t believe in you giving them money to entice them, I can tell you that they’ve never asked for money. They don’t even know my pocket (laughs).

Even the charity I’m doing, I don’t give money anyhow. I only distribute books, paying for Common Entrance exams and Jamb forms. Meanwhile, I’ve already told the head teacher of the school where I donnated exercise books not to inform any parent because I don’t want them to see me as their little god because I feel if you give out you don’t need to wait for thank you.  When some people met me and they were like “are you the Lola Bakre we’ve been hearing about? They couldn’t believe it because they were actually expecting an elderly woman. One day, my uncle told me that some of the leaders wanted to see me. I met with them and they asked me if I would love to contest and I said yes.

Do you have people in your family who are politicians?

Not really. But I was told my grandfather (my mum’s dad) was a politician. When he was alive, I heard he was very close to Chief Obafemi Awolowo. Though, I grew up knowing him as a Cocoa merchant. He never contested any post, but he was a strong politician. He did Charity too.

Who are your godfathers?

I don’t have any because I don’t believe in them. Lots of people have asked me who is your Godfather, do you know you can’t survive without a Godfather?

But so far so good, I don’t have any. Some people have been calling me that they want to support me, that without them I can’t win the election. I told them this is not about winning. Even if  I lose the election will I kill myself?

My own politics is not a do-or-die affair, if I lose, I will be in my party and still continue with my Charity work. I have seen a so called godfather who said he would give 20 million on a condition that I must sleep with him. So, if I do that what does that make me, a prostitute. That is why I don’t believe in it.

What message do you have for your people?

They should believe in me, this is their daughter Omolola Bakre and I promise I won’t disappoint them.