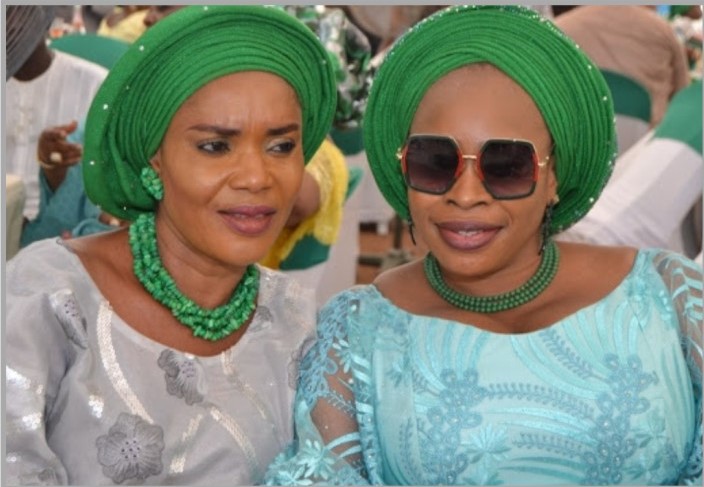 Thursday 21st March 2019 was a memorable day, as Hajia Olawunmi Sherryfat Otubambo gathered friends and family in Ijebu-Ode in remembrance of her mum who died 50 years ago. The event which took place on an open field in the Sabo area of Ijebu-Ode, Ogun State, started at 10 am prompt with prayers.

She invited top Islamic clerics in Ijebu-Ode to handle the prayer which lasted for 3hrs:30mins. Her mum is late Mrs Mujidat Morenikeji Otubambo Let us talk about her look for the Morning Prayer.

Big, Bold and Beautiful best describes her. Sherifat wore a white luxury lace, her gele was embellished like that of a bride. Let us also add that she has a very high taste when it comes to Jewelery s because she rocked one of the best collections. She also complemented her outfit with a silver shoe and purse.

The Islamic clerics said beautiful things about Sherifat’s mum late Mrs Mujidat Morenikeji Otubambo. They mentioned all her good deeds while she was alive. They also stated that she is a wonderful mother that takes care of other people’s children as her own biological children.

Immediately after the Morning Prayer, the young and energetic Fuji artiste Abiola Ayinde popularly known as S1 came on stage to perform. He sang exactly like the legend Fuji legend K1.

While S1 was performing, pretty Sherifat stepped in a gorgeously multi-coloured sequence lace. When you sight her in that dress, you would be convinced that she is indeed a fashionista. She made people turn 360 degree with her beautiful jewellery. Another wonderful thing about her is her smile. She smiled all through.

Alhaja Sherifat is surrounded with lovely people, her friends in London, Lagos and those that grew up with her in Ijebu-Ode turned up massively to support her.

They were dressed in green attire and of course, they looked so gorgeously in their outfit.

Her set of friends and sisters are the kind of friends one should have. Apart from gracing the occasion, some of them came with souvenirs and other beautiful gift.

We should also talk about the impact of Alhaja Ronke Bamgbola, the pretty wife of Vice Chairman Lagos APC. She did all her best to make sure the event is successful.