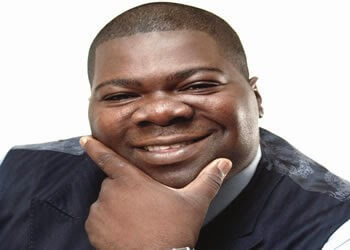 Have you run into Rev. Folarin Obey Fabiyi of late? Have you noticed that he has lost so much weight? He is now half his size. We can tell you authoritatively how it happened and the lady behind the weight loss.

When many people first noticed his massive loss in weight, months back all sorts of rumours made the rounds.

Some said he did Surgery. Some said he may have done Gastric Bypass (a medical procedure) that is usually used to drastically reduce weight.

But we can tell you authoritatively that he did not do any of these. He simply went to a popular health farm in the UK to chill out for 2mths. What happened was that he ran into Rev. Esther Ajayi not too long ago who advised him, as a matter of urgency, to go and lose weight because it was beginning to affect his breathing.

He agreed. She, it was who organised for him to go and cool off on a health farm in the UK. It is a very expensive procedure, because you would be admitted into the farm, like a patient and everything you drink or eat must be as prescribed. You will be expected to undergo rigorous diet also. And payment is in pounds. When he arrived the health farm, the general assumption was that, becuase of his weight, he would need to be there for about 4 to 5 months. But in 2 months of eating healthy, he lost 50kg. He was so happy. His dad was also very happy because he also went through that experience 40 years ago. It was the same health farm that Folarin went that Obey went 40 years ago. But he spent only a month.

We got Rev. Ajayi to tell us more about Rev. Folarin’s transformation.

First, we asked her to tell us how she developed her art of Giving?

“I have been like this since childhood” she explained. “I am only doing it better as an adult”.

Where was she born?

About how she recently helped Ebenezer Obey’s son to address his health challenges, what prompted this?

“How did you know? (Smiles). “I don’t like talking about such personal issues. Well, I used to be fat before myself. I was 2 size of this and I lost the weight. When he came around, and he said its his wedding anniversary, I told him, the only wedding anniversary gift for you is to go and lose weight. And he did it, it was amazing”.

We learnt it cost many millions of naira as he lost 50kg? How much did she pay?

“Human being is worth than any money. God made it possible and we return the glory to him”.

In the 70s Chief Commander, Ebenezer Obey also went through this challenge. That is when he released his Babu Lukudi song in 1974? Only few people would still remember how the rigours of playing long hours began to affect Obey’s health, leading to his admission at various hospitals like St. Nicholas Hospital and Jalupon Hospital in Lagos. All the doctors couldn’t figure out what was wrong with him. That was what led a doctor to advice him to seek treatment abroad. So, he travelled to London where one English doctor examined him thoroughly. He also could not discover any ailemt. He only noticed that Obey was growing overweight. He diagnosed his problem as Stress caused by Overweight. He then advised Baba Commander to shed his weight. He refused to put Obey on any drug. He simply sent him to a Health Farm where they put him on diet and exercise programme. Evangelist Ebenezer Obey was there for 4 weeks and by the time he came out, he had cut down on his weight considerably. He now looked slim and trim.

Trust Nigerians, whilst Obey was at the Healthfarm the rumour was all over Nigeria that Obey had fallen ill and had been admitted into a London hospital. Some even said he may have passed on. Others said he had undergone an operation, and in the course of the operation, a bird flew out of his stomach. They said it was the Lukudi Bird. The local gist in Lagos then was that every rich man must have swallowed Lukudi. They said people who want to do money rituals are made to swallow a charm that turns into a bird in their stomach.

Obey was shocked. He was perplexed. When Obey returned back to Nigeria and heard all the rumours that had made the rounds he had to release a track that sold  remarkably then, to correct the rumours, to tell the world that he never swallowed any concoution, hence the Babu Lukudi album.

That was what he went through then. For those who don’t know much about Weight Gain, lets tell you a bit of it. Weight gain can result from an increase in body fluid, muscle mass, or fat. An increase in body fluid can come from medications, fluid and salt retention, intravenous fluid infusion, kidney or heart failure. An increase in muscle mass is commonly seen with exercising. An increase in body fat is commonly seen as a result of diet or lack of exercise as the body converts muscle to fat. An excessive weight gain is referred to as obesity. Obesity is a function of environmental (diet, exercise, lifestyle, etc.), hormonal, and inherited (genetic) factors in varying degrees

Obesity is generally caused by eating too much and moving too little. If you consume high amounts of energy, particularly fat and sugars, but don’t burn off the energy through exercise and physical activity, much of the surplus energy will be stored by the body as fat.

Obesity means having too much body fat. It is different from being overweight, which means weighing too much. The weight may come from muscle, bone, fat, and/or body water. Both terms mean that a person’s weight is greater than what’s considered healthy for his or her height.

Obesity happens over time when you eat more calories than you use. The balance between calories-in and calories-out differs for each person. Factors that might affect your weight include your genetic makeup, overeating, eating high-fat foods, and not being physically active.

Obesity increases your risk of diabetes, heart disease, stroke, arthritis, and some cancers. If you have obesity, losing even 5 to 10 percent of your weight can delay or prevent some of these diseases. For example, that means losing 10 to 20 pounds if you weigh 200 pounds.

It’s very important to take steps to tackle obesity because, as well as causing obvious physical changes, it can lead to a number of serious and potentially life-threatening conditions, such as:

Coronary heart disease some types of cancer, such as breast cancer and bowel cancerstroke

Obesity can also affect your quality of life and lead to psychological problems, such as depression and low self-esteem (see below for more information about the health problems associated with obesity).

Obesity is generally caused by consuming more calories – particularly those in fatty and sugary foods – than you burn off through physical activity. The excess energy is stored by the body as fat.

Obesity is an increasingly common problem because for many people modern living involves eating excessive amounts of cheap, high-calorie food and spending a lot of time sitting down, at desks, on sofas or in cars.

The best way to treat obesity is to eat a healthy, reduced-calorie diet and exercise regularly. To do this you should:

eat a balanced, calorie-controlled diet as recommended by your GP or weight loss management health professional (such as a dietitian)

Take up activities such as fast walking, jogging, swimming or tennis for 150 to 300 minutes (two-and-a-half to five hours) a week

You may also benefit from receiving psychological support from a trained healthcare professional to help change the way you think about food and eating.

If lifestyle changes alone don’t help you lose weight, a medication called orlistat may be recommended. If taken correctly, this medication works by reducing the amount of fat you absorb during digestion. Your GP will know whether orlistat is suitable for you. In rare cases, weight loss surgery may be recommended.

Obesity can cause a number of further problems, including difficulties with daily activities and serious health conditions.

The psychological problems associated with being obese can also affect your relationships with family and friends, and may lead to depression.

Being obese can also increase your risk of developing many potentially serious health conditions, including: type 2 diabetes – a condition that causes a person’s blood sugar level to become too high high blood pressure high cholesterol and atherosclerosis (where fatty deposits narrow your arteries), which can lead to coronary heart disease and stroke asthma metabolic syndrome – a combination of diabetes, high blood pressure and obesity several types of cancer, including bowel cancer, breast cancer and womb cancer gastro-oesophageal reflux disease (GORD) – where stomach acid leaks out of the stomach and into the oesophagus (gullet) gallstones – small stones, usually made of cholesterol, that form in the gallbladder reduced fertility osteoarthritis – a condition involving pain and stiffness in your joints

sleep apnoea – a condition that causes interrupted breathing during sleep, which can lead to daytime sleepiness with an increased risk of road traffic accidents, as well as a greater risk of diabetes, high blood pressure and heart disease

pregnancy complications, such as gestational diabetes or pre-eclampsia (when a woman experiences a potentially dangerous rise in blood pressure during pregnancy)

Obesity reduces life expectancy by an average of 3 to 10 years, depending on how severe it is. It’s estimated that obesity and being overweight contribute to at least 1 in every 13 deaths in Europe.