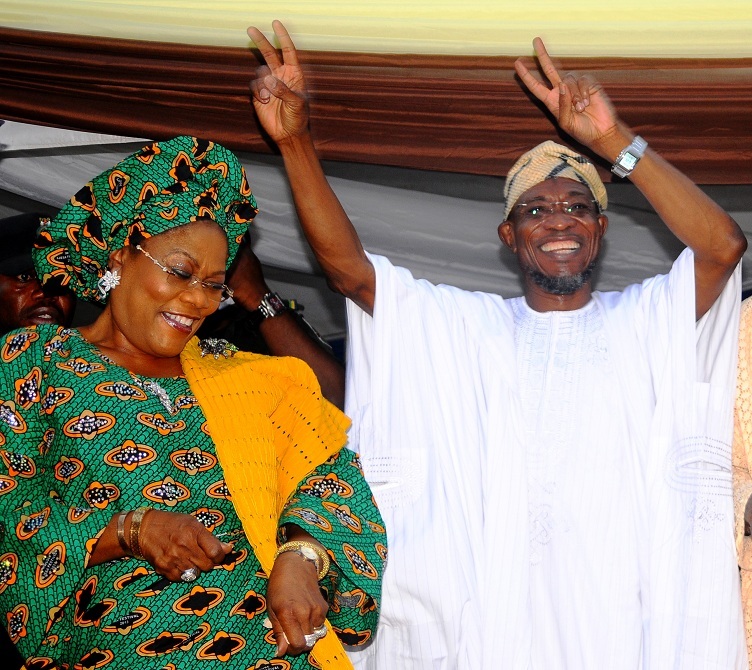 At the last City People Magazine @ 20 lecture delivered by the Governor of the state of Osun, Ogbeni Rauf Aregbesola, in Osogbo, there was one pretty lady on the headtable, who sat beside the Guest Speaker of the day, the governor. The lady was the deputy governor of the state, Otunba Titilayo Olaoye-Tomori. She was quiet all through the lecture, but she was called upon to play a dual role, as the event came to a close. She was to give the closing remarks and to render the closing prayers.

Her remark was brilliantly presented as she spoke extempore for 30 minutes. The deputy governor eulogised her boss for his remarkable leadership over the last 6 years. She started by saying many people often ask her why she is so loyal to her boss and she would explain that its because of the transparent lifestyle of Gov. Aregbesola and the dedication and commitment he has shown towards moving the state of Osun forward. She said the governor carried her along all the way and had shown exemplary leadership in all he did.

“My commitment to my boss is total, “she explained. “My loyalty. To Ogbeni Aregbesola is more than 100%. It is 101%. I have always believed that this is how it should be for the state to be peaceful.

“What many don’t know is that any state where the deputy governor does not agree with the governor, there wouldn;t be progress.

“That is why whenever people ask me why I am so loyal, I tell them straight that I have no ambition that is different from that of my boss. My commitment is to make sure we succeed and that we accomplish much during our tenure.

And she revealed how the governor has implicit faith in her abilities to deliver on the tasks given her.

By the time, she ended her short speech. She was given a resounding applause for her brilliant delivery.

Those who listened to her for the very first time that day were impressed at her short but impactful speech.

But those who are used to her confirmed that she had been a very good deputy governor whose commitment to her boss has been  unquestioned. She is said to be fiercely loyal as demonstrated that day, because she was not billed to attend the lecture.

Earlier that day, she had gone to Iwo to attend the passing out parade of the youth corpers who were in Iwo for their Orientation. Because the governor has cancelled all his engagements to enable him deliver the lecture, she was to be in Iwo, and other principal officers were to go and represent the governor in other parts of the state.

But immediately the deputy governor completed her assignment she drove down to the venue to be part of the governors lecture.

That is Otunba Grace Titilayo Laoye-Tomori for you. She likes to go the extra mile to deliverer service.

At more than 60, she is blessed with persuasive skills. Don’t forget she is a teacher by training. A peep into her pedigree perhaps explains why she is the way she is.

Otunba Grace Titilayo Laoye-Tomori, who is the Otunba Ariwajoye of Imoru Land, the Yeye-Oba of Oba, Deputy Governor of the State of Osun and the Honourable Commissioner for Education is affectionately called Aunty Titi by her family members was born over 60 years ago by Pa Amos Oyeyemi Laoye.

She distinguished herself academically and morally that the management of St. Catherine’s Grammar School, Owo did not hesitate to employ her to teach in the school immediately she completed her HSC.

It is worthy of note that she is now the National President of St. Catherine’s Grammar School Old Girls Association. In 1970, she gained admission to study for a Bachelors of Arts Degree at the University of Lagos, which she successfully completed in 1973. It was at the University of Lagos that she acquired two additional Post Graduate Degrees i.e. P’G.D.E. in 1978 and Masters in Public Administration (M.P.A.) in 1984.

Apparently in line with the wish of her father that she should be a teacher, she applied to the Federal Ministry of Education after the compulsory Youth Service Scheme and was employed as an Education Officer in 1974.

During the 6 years she spent at the Federal Ministry of Education (1974-1980), she worked at the Research and Information Department in the Ministry and was later posted to some teachers’ training colleges to teach.

In 1980, Otunba Titi Laoye-Tomori began a career as an administrator at the University of Lagos where she was appointed an Assistant Registrar.

She rose to occupy the post of a Principal Assistant Registrar at the time she left the University in 1989. She served in various capacities as Faculty Officer at the faculties of Education and Sciences; she was also an Establishment Officer and later the University Admission Officer for many years.

She left the university in 1989 and joined Coopers & Lybrand International where she was appointed a Senior Consultant in Human Resources Management. She left Coopers and Lybrand and joined PFM Consulting where she rose to become the Managing Director in October, 1992.

In March 1995, she left PFM Consulting limited to manage her consultancy firm (Quints Management Consultants). In 1998, she joined Industrial and General Insurance (IGI) Plc. Other posts she held while at IGI included Managing Director, Discovery Medical Equipment & Scientific Services Limited (a Medical Equipment Company owned by IGI between March, 2005 and 2007. During the same period, she was appointed to the Board of International Health Management Services Limited, a Health Maintenance Organisation (HMO) as an Executive Director, Finance and Administration.

She started her political career after she voluntarily retired from regular employment in 2006.

In recognition of her wealth of experience at the public and private sectors, she was unanimously considered as the Deputy Governorship candidate to Ogbeni Rauf Adesoji Aregbesola. The mandate freely given by the good people of the State of Osun in 2007 was validated through a Court of Appeal Judgment in November, 2010.

Her Excellency, Otunba Titi Laoye-Tomori currently the Deputy Governor and the Honourable Commissioner for Education in the State of Osun otherwise known as “Ipinle Omoluabi”.

Why Many Newspapers Are In Trouble Now – THISDAY Editor, IJEOMA NWOGWUGWU

I Am Battle Ready For The 2019 Guber Elections, OGUN Guber Aspirant, GNI