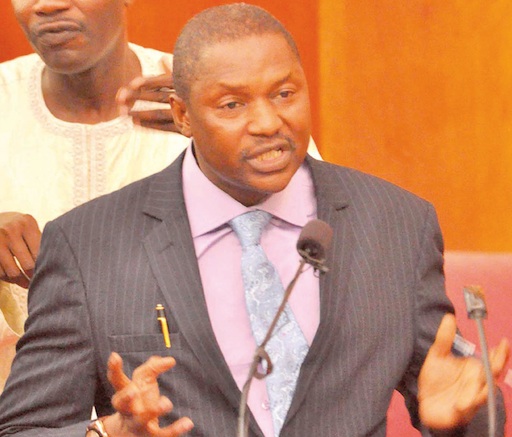 Minister of Justice and Attorney-General of the federation (AGF), Abubakar Malami, has recommended the sack of Ibrahim Magu, acting chairman of the Economic and Financial Crimes Commission (EFCC).

According to THISDAY, Malami asked President Muhammadu Buhari to sack Magu over “weighty” allegations, including the diversion of recovered loot.

In addition to allegedly re-looting recovered loot, he was said to have also accused the EFCC acting chairman of insubordination and misconduct.

In a memo to the president, he was also said to have shortlisted three candidates to be considered as Magu’s replacement.

Malami did not respond to an enquiry by Newsmen, but THISDAY quoted a source privy to the memo as saying the minister listed “22 weighty allegations” against the EFCC boss.

The source reportedly said: “I can authoritatively tell you that though Magu has survived previous plots to remove him, the AGF’s legal opinion remains the deadliest plot to get Magu out of the EFCC as AGF’s letter to the president contained 22 weighty allegations that require Buhari’s decision on whether or not to send Magu’s name to the Senate for confirmation or replace him.

“This is because the office of the AGF is the supervising ministry of the EFCC and so his legal opinion cannot be treated with levity.

“For example, Malami alleged accounting gaps or discrepancies of figures concerning the recovered assets, claiming that Magu was not transparent enough in the management of recovered assets.”

The reported move by Malami is yet another blow to Magu’s position at the EFCC since his appointment in November, 2015.

He has remained in acting capacity following the senate’s refusal to confirm him on at least two occasions over the years.

Among the reasons the senate has cited for not confirming him is the Department of State Services (DSS) report which accused Magu of various forms of misconduct including living in a N40 million mansion paid for by one retired air commodore who is allegedly involved in shady deals.

But the EFCC chief is said to be fighting against his replacement, and likewise his supporters at the presidency.

THISDAY quoted presidency sources as saying removing Magu “at this time when he has given muscle to Buhari’s anti-corruption fight would be a mistake”.

“It is painful that the EFCC boss is facing certain powerful forces who have decided to remove him in spite of his remarkable achievements,” an unnamed source was quoted as saying.