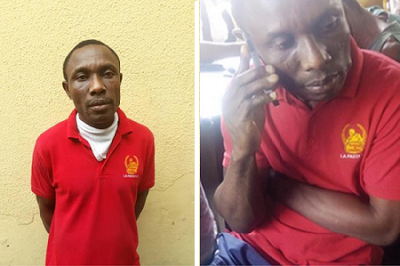 Investigators at the homicide section of the State Criminal Investigations Department (SCID), Lagos Command, are working to unravel circumstances surrounding the death of a woman allegedly beaten to death by her 42-year-old husband penultimate weekend at Oko-oba area of Lagos State.

The suspect, John Owobi, is currently being detained by detectives at the SCID, Panti, Yaba, for murder, after allegedly committing the act and forcing his three kids to tell neighbours that their mother died after drinking Snipper, a poisonous insecticide.

The Deputy Commissioner of Police, Bolaji Salami, said the lifeless body of the deceased, Theresa, was found lying on the floor of their room and parlor self-contained at No. 42, Musiliu Street, Oko-oba area of Lagos by neighbours.

To cover up his track, the suspect was said to have persuaded his children not to say anything contrary to what he had told their landlord.

A source at SCID revealed that the neighbours were attracted to the scene by the persistent cry for help from the deceased on the day she died, though the suspect had told his neighbours that his wife of about 15 years died after she drank poison.

The suspect further alleged that he had earlier tried to prevent his wife from committing suicide, but that he was shocked hours later when he discovered that she had gulped a full bottle of Snipper.

Luck, however, ran against the suspect that blew open his tissue of lies when his three children insisted that their dad had actually instructed them to say that their mum died after drinking insecticide.

“I suspected some lies in John’s earlier statement because we heard his wife crying severally all through the night. So when he said that his wife drank Snipper, I doubted him. I later took his kids to a corner where I asked them what happened to their mother. True to my suspicion, the children said that their father had instructed them to say that their mum dank poison.

“With this information, I took the oldest of them aside and asked him to narrate to me what happened in detail. The boy, who is about 13 years old, said his father beat up their mother all through the night,” the landlord, who refused to be named, said.

The Lagos State Police Public Relations Officer (PPRO), Olarinde Famous-Cole, who confirmed the incident, said an autopsy conducted on the woman revealed that she died of trauma.

Famous-Cole, an Assistant Superintendent of Police (ASP), disclosed that the medical report conducted on the body also revealed that the deceased suffered internal injuries and fractures from the beating she received.

He said: “The suspect killed his wife and still went to the station to report that the deceased was found lying dead on the floor in their room. He claimed that his wife drank Snipper, but investigation revealed that the suspect beat up the wife to death. The suspect having seen that the wife was dead called his kid to say if anybody asks how their mum died that they should say that she took poison.”

Just In: Another Kidnapper’s Den Uncovered At Ikeja