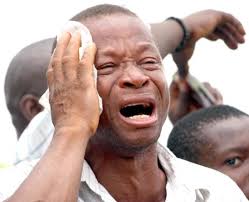 Early last week, there were reports that Adakole, from Benue State whose wedding is slated for December 28 had invested N300 thousand into the scheme last month and was expecting to get his 30 per cent income before his wedding.

He then attempted to take his life in Otukpo, Benue State by drinking insecticide, last Tuesday following the news that the ponzi scheme had crashed.

Speaking on his ordeal on a radio programme, Weathering the Storm with Naomi De Diva on 92.1 Vision FM Abuja on Tuesday, the young man said contrary to the report, he invested N750,000 in the scheme against the N300,000 that was widely reported.

Adakole, who opened up on his predicament during the phone-in programme admitted that he had earlier made profits from the scheme.

He said amid sobs,

“I came to Abuja here few months back in preparation for my wedding and my friend introduced me to the MMM thing. He told me about the benefit involved, though I was a bit hesitant about it but he succeeded in convincing me to register under him.

This time, I believed it was real and I decided to increase the money. Before then, my fiancée had warned me against it. So I went to my cooperative to obtain a loan and they gladly gave thinking it was for my wedding. I put in N750k last month, hopping than it would yield 30 per cent income this month only to wake up one morning to discover that my account has been suspended.

To be sincere, the best option I had then was to take my life, because I had thought of how I am going to face my woman. I didn’t even know when I took the insecticide. It was my guy, Fred who rescued me. My wedding is around the corner, I have been saving the money ahead of the wedding only to end up that way.

As we speak, I have not set my eyes on my woman. I put off my phone since then because the shame is much. My wedding is 8 days from now and I am confused. I just returned from the hospital. I don’t know what to do.”

Meanwhile, many callers, who phoned in during the programme scolded the young man for attempting to take his life because of money.

Others advised him to get loan from bank for the wedding, while some asked him to put his wedding on hold till January when the scheme might have returned.

Man who drank insecticide over MMM crash said he invested 750 not 300k as reported was last modified: December 22nd, 2016 by Reporter